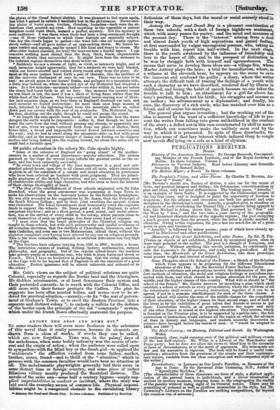 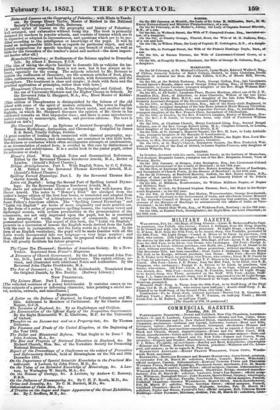 History of the American Revolution. By George Bancroft, Correspond- ing Member of the French Institute, and of the Royal Academy of. Berlin. In three volumes. Volume I.

Discourses on Various Subjects. Read before Literary and Scientific Societies. By Samuel Bailey. The Militia Iffiffor ; a Novel. In three volumes.

The _Prophet's Vision, and other Poems. By Charles T.. Browne, Au- thor of " Irene," &a. [Mr. Browne's merits are, fluency of diction, a nice ear for the music of verse, and poetical imagery and feeling; his deficiencies, conventionalism in plan and ideas, with too great diffusiveness. The leading poem, " Astrello," is an example of these faults. It is suggested by the Continental events of the last four years, and is designed to paint the superiority of freedom to despotism; but the scheme and execution are both too general and com- monplace in the rhetorician's sense. Astrello, a prophet-poet, is standing on a pinnacle of rock overlooking the Eternal City ; a superior being appears to him, _like Michael to Adam, shows him the East governed by " fear " and the West by " love," and the two take a joint survey of the geographi- cal and historical characteristics of the opposite regions ; the past occupying

greater space than the present, while the latter is chiefly. marked by allusions. Owing to this vagueness, the piece has too much the air of a prize poem in plan and treatment. " Astrello" is followed by minor poems; some of which have already ap- peared in Blackwood and other publications.] Memorials of the Great Exhibition, and other Poems. By Ed. IL Fry. [Verses on objects of art exhibited, followed by occasional pieces, often on some topic personal to the author. The poet is a disciple of Tennyson, and a clever one. Without anything like servile imitation, he continually re- calls the Laureate's In _Memoriam, and really with a good effect. At the same time, the Memorials of the Great Exhibition, like their prototype, want greater weight and interest of subject]

Some Thoughts about the School of the Future: a Sketch of the Solution which Time appears to be preparing for the different Educational Questions of the Day. By the Reverend Foster Barham Zincke.

[Mr. Zincke's criticisms and propositions involve the deficiencies of the pre- sent methods of education, the social and religious feelings or prejudices con- nected with them, and what should be a proper education for the poor, the middle, and the higher classes of this country. What will or should be "the school of the future," Mr. Zincke answers by sketching a plan which shall establish a school or schools in every given district, where the of all the inhabitants shall receive primary instruction, together can be so agreed, if not in a separate establishment for each of the three classes. A central school will receive the sons of the middle classes for the completion of their education, of the higher classes for their second stage, and of such of the lower as by the exhibition of great talent find friends or means to get there. Universities would, as at present, receive the upper and such of the other classes as aimed at the -highest education. This system, which is founded on the Prussian plan, is to be supported by a public, rate ; the full curriculum of instruction would embrace all the topics on which the advance of time in history and languages., and modern scientific discoveries in science—have brought before the minds of men : it "would be adapted to 1860, not 1560."]

The Half-Century; its History, Political and Social. By Washington Wilke.

[A condensed, close, rapid running-over of the political and military events of the last half-century. Mr. Wilke is a Liberal of the Manchester and Peace party ; but he does not allow his views to blind him to the necessity or force of circumstances, or to the merit of opponents. His statements are fair and his narrative is vigorous. The book will be found a useful com- pendium; attractive from the greatness of the events and their contempo- rary nature, readable from the clear conception and well-compacted style of the writer.]

[The charaetenstica of these discourses are force of style, a distinct appli- cation of the general lesson to- individuals, and a clever illustration. of ancient by modern manners, bringing home to the congregation the reality of the parable without losing sight of its Oriental nature. There may be something of personal as well as platform mannerism in the style, but Dr. Cumming's Lectures on the Parables are striking compositions, far beyond the common run of sermons.]

Notes and Lessons on the Geography of Palestine ; with Hints to Teach- ers. By George Henry Taylor, Master of Method in the National Society's Training Institution, Battersea.

(4 useful series of lessons on the geography and history of Palestine ; well arranged, and exhaustive without being dry. The book is primarily designed for teachers in popular schools, and consists of lessons which are to be expanded or adapted to circumstances, and questions which are to be mo- dified according to the intelligence or knowledge of the pupil. It will be found an indispensable little book as regards its particular object, and will furnish suggestions for specific teaching in any branch of study, as well as hints for the formation of the teacher's mind and method-the most import- ant matter after all.]

Household Chemistry; or. Rudiments of the Science applied to Everyday Life. By Albert J. Bernays, F.C.S.

[The idea of taking the objects familiar to domestic life as vehicles for im- parting information respecting them is not new, but it has always an in- terest, especially for the young. The subjects selected by Mr. Bernays to explain the rudiments of chemistry, are the common articles of food, glass, china,- earthenware, soap, and household metals, with fermentation, and the atmosphere. The treatment is clear and simple; it deals with facts and the practical application of principles, rather than with laws.]

.Theophrasti Characteres ; with Notes, Psychological and Critical. For the use of University Students and the Higher Classes in Schools. By the Reverend John G. Sheppard, M.A., &e., Head Master of Kidder- minster School.

[This edition of Theophrastus is distinguished by the fulness of the old school with some of the spirit of modern criticism. The notes in. English are copious ; there is an appendix on the Greek aorist, and another on the Sophists, in which Mr. Sheppard discusses the opinion of Mr. Grote in his celebrated remarks on that unpopular class ; and there is some introductory matter relating to manuscripts, editors, and previous editions. The text is founded on Ast's.]

fA great number of leading facts connected with classical geography, my- thology, tradition, history, and chronology, are contained in this little book. The dryness or confusion which often accompanies attempts at condensation, or an accumulation of naked facts, is avoided in this case by distinctness of arrangement and subdivisions. It is a useful book to the junior pupil, either for reference or study.]

[The above are school-books edited or arranged by the well-known Ker- ehever Arnold. The notes to "Homers Iliad" ate abridged from the author's larger edition of the first four books, or translated and adapted from Diibner. "The Clouds" of Aristophanes is an expurgated reprint from Pro- fessor Felton's American edition. The "Spelling turned Etymology" and "Iatin vin' English" are books of more originality and more general use. In the form of a series of progressive spelling-lessons, the various vowel and dipthongal sounds, with certain peculiarities in the pronunciation of the consonants, are not only impressed upon the pupil, but he is exercised in the meaning of words, the formation of compounds, and several grammatical questions. The sequel of this book, the "Latin vitt English," presents in a succession of lessons the English words derived from the Latin with the root in juxtaposition, and the Latin words in a foot-note. In the form of an English vocabulary, the pupil will be made familiar with all the Latin words incorporated into our language-a very large number; and thus, should he proceed to learn Latin, be prepared with a stock of words that will greatlyfacilitate his future progress.]

The tipper Ten Thousand; Sketches of American Society. By a New- Yorker. Reprinted from Fraser's Magazine.

A Discourse of Church Government. By the Most Reverend John Pot- ter, D.D., Lord Archbishop of Canterbury. The eighth edition, re- vised, and illustrated with additional Notes and Authorities. By the Reverend John Clarke Crosthwaite, The Jew of Denmark ; a Tale. By M. Goldsehmidt. Translated from the Original Danish, by Mrs. Bushby. (Railway Library.)

A Letter on the Defence of .England, by Corps of Volunteers and Mi- litia. Addressed to Members of Parliament. By Sir Charles James ' Napier, G.C.B.

The Invasion of England, &c. By an Englishman and Civilian.

An Examination of the Official Reply of the Neapolitan Government. - By the Right Honourable W. E. Gladstone, M.P. for the University of Oxford.

Thoughts on an Income-tax and on a Property-tax, &e. By Thomas Gisborne.

The Finances and Trade of the United Kingdom, at the Beginning of the Year 1852.

The Ballot and Ministerial Reform. What Ought to be Done ? By John Jenkins, M.A., &c. The Rise and Progress of National Education in England, &e. By Richard Church, Hon. Sec. of the Yorkshire Society for Promoting National Education. Report of the Proceedings of a Conference on the subject of Preventive and Reformatory Schools, held at Birmingham on the 9th and 10th December 1851.

On the Importance of Special Scientc Knowledge to the Practical Me- tallurgist. A Lecture, by John Percy, M.D., &c. On the Value of an Extended Knowledge of Mineralogy, &c. A Lec- ture, by Warington W. Smyth, M.A., &e. On the Science of Geology, 8re. A Lecture, by Andrew C. Ramsay, F.R.S.

A nyatise on the Sugar and Sugar Apparatus of the Great Exlsibitiori, Sic. By J. Scoffern, M.B., &c.