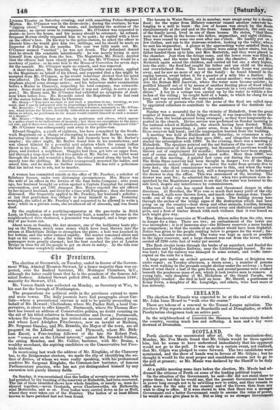 The election at Greenwich, on Tuesday, ended in favour of the Govern- ment Whig, Admiral Houston Stewart, by a larger majority than was ex- pected, over the Radical barrister, Mr. Montague Chambers, Q.C., although the latter could boast that he is the grandson of the famous Ad- miral Rodney. Admiral Stewart polled 2964, and Mr. Chambers 1249 ; majority for Stewart, 1715.

Mr. Vernon Smith was reelected on Monday, as Secretary at War, to his seat for the borough of Northampton.

The preparations for political strife in the provinces extend to more and more towns. The daily journals have had paragraphs about Car- lisle—where a preeautional canvass is said to be quietly proceeding on behalf of Mr. Howard; Cheltenham, where Mr. Packer Butt, a local Con- servative, is about to offer himself; Dartmouth, where Sir Thomas Her- bert has issued an address of Conservative politics, no doubt counting on the aid of his titled relatives in Somersetshire and Devon ; Portsmouth, whence Sir George Staunton has retired on account of advanced years, and where Lord Adolphus Fitzclarence, now an invalid at Madeira, air, Sergeant Gazaleit, flud Mr, Bramble, the Mayor of the town, are all proposed on _tbe Liberal interest; ana Plymouth, where. Mr. Ilia- ham Escott, a Free-trading follower of the late Sir Robert Peel, now " comes out on the Liberal interest," against Mr. Roundell Palmer, the sitting Member, and Mr. Collier barrister, with Mr. Braine, a wealthy merchant, the aspiring candidates on the Conservative but Free- trade interest.

In mentioning last week the address of Mr. Kinglike, of the Chancery bar, to the Bridgewater electors, we made the slip of identifying the au- thor of .135then, of whom we were really speaking, with his professional confrere Mr. Sergeant Kinglike, the Common-law banister, of famous Parliamentary practice, who has not yet distinguished himself by any excursion into purely literary fields.

On Sunday, it was ascertained that the bodies of seventy-one persons, who had perished by the bursting of the reservoir at Holmfirth, had been recovered. The list of those identified shows how whole families, or nearly so, were de- stroyed together,—seven Croslands, seven Charlesworths, six Hellawells, nine Mettencks, and so on. Four bodies were carried down as far as Hull, where they were taken out of the Humber. The bodies of at least fifteen known to have perished had not been found. The houses in Water Street, six in number, were swept away by a double flood ; for the water from Bilberry reservoir caused another reservoir be. longing to a mill to burst : the row of houses was struck by the floods simultaneously at the end and at the front. James Metterick, the only one of the family saved, lived in one of these houses. He states, "that there were ten of them in the house—his father, stepmother He eight children. They were roused by some one soon after one o'clock. He hastily put on a few clothes, and ran to the staircase-window, looking up the valley, where he met his stepmother. A glance at the approaching water satisfied them it was the reservoir had burst. The children were asleep below stairs, but his father handed them up to him and Mrs. Metterick, and they were placed in the chamber. Just then the deluge came, and the lower room was filled in an instant, and the water burst through into the chamber. He and Mrs. Metterick again seized the children, and carried all but one a story higher, into the attic : the flood had caught his father and one child on the stairs and overwhelmed them. The next moment the whole house was carried away, and he saw no more of any of the family : he found himself in the raging torrent, swept before it for a quarter of a mile like a feather. Ile got hold of a floating plank, lost it, and seized another • was carried aside into the Bottom It' 1 reservoir, where the water soon became quieter ; he paddled himself out of it by means of another floating piece of wood which he seized. He reached the bank of the reservoir in a very exhausted con- dition." A boy in a cottage was carried up by the water to within a few inches of the ceiling ; he caught hold of a beam, to which he clung for an hour, and was rescued when the water subsided.

The crowds of persons who visit the scene of the flood are called upon. by appointed collectors to contribute to the assistance of the destitute suf- ferers.

Sunday was a mournful day in the vicinity of Holmfirth, from the great number of funerals. At Holm Briggs church, it was impossible to inter the bodies, from the burial-ground being swamped ; so they were temporarily de- posited in the church. Divine service was performed on Sunday morning in the national school at Holmfirth, the church having been flooded. While the service was proceeding, a panic arose, from a false report that Hobn Styes reservoir had burst; and the congregation hurried from the building. A meeting was held at Huddersfield on Saturday, to commence a sub- scription : Messrs. Brooks and Son gave 500/., and altogether the meeting started the subscription with 16001. In the evening, there was a meeting at Holmfirth. The speakers pointed out the sad features of the case : not only a great destruction of life and property, but thousands of survivors would be thrown out of employment for months ; thirteen mills have been stopped, and of course many collateral trades must suffer. More than 10001. was raised at this meeting. A painful fact came out during the proceedings. The Holm Styes reservoir had been thought in danger ; two of the three commissioners ordered the drawer to lower the water from seventy-five to forty feet; the third commissioner was averse to this, and when the water had been reduced to forty-six feet, still a dangerous height, he influenced the drawer to stop the efflux. This was announced at the meeting. The drawer was sent for ; he admitted the fact ; when two policemen were de- spatched by the Magistrates present to see that the water was lowered to the

level, despite any interference by commissioners. •

The vast fall of rain has caused floods and threatened danger in other directions. At Hereford, the Wye rose so much that many parts' of the city were flooded, walls were thrown down, and much other damage done. Coach- traffic out of the city was stopped for a time. The boiling stream bore through the arches of the bridge signs of the destruction which had been going on up the country—dead sheep and other animals, hurdles, farming implements ; boats and barges were carried away and shattered against the piers and a float of timber struck with such violence that it was feared an arch might give way.

The Manchester reservoirs at Woodhead, fifteen miles from the city, were in danger for a time. There are two ; an embankment of the lower one was incomplete ; it is of immense size—the Bilberry reservoir a mere bucket in comparison; so that the results of an accident would have been frightful. Notice was given to the people residing below to prepare for the worst ; for- tunately, a disaster was averted. The water was kept as much as possible in the upper reservoir, and a large channel was cut from the lower, which carried off 3200 cubic feet of water per second.

The Roch rivulet broke through the banks of an aqueduct, and flooded the Lancashire and Yorkshire Railway, near the Littleborough tunnel. No one was hurt ; but the railway was damaged to some extent, and traffic inter- rupted on the rails for a time.

A large gate under an arched gateway of the Pavilion at Brighton was under repair; on Tuesday afternoon, a storm arose ; a number of persons who were walking in the grounds sought shelter under the archway ; a fierce blast of wind threw a leaf of the gate down, and several persons were crushed beneath the ponderous mass of oak, which it took twelve men to remove. A young lady, only daughter of Mr. Michelson of the Grand Parade, was frightfully crushed she died in half an hour. Mr. Sheriff, a gentleman of Kemp Town, a daughter of Mr. Langridge, and others, were hurt more or less seriously.