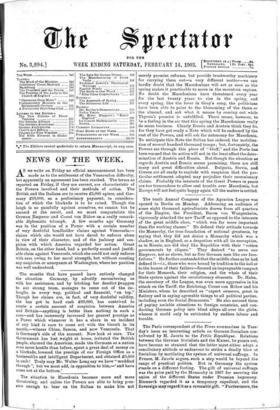 Page 1, 14 February 1903 — The months that have passed have entirely changed the situation.
Close

The months that have passed have entirely changed the situation.

Germany, by adroitly encumbering us with her assistance, and by hitching her derelict "waggon to our strong team, manages to come out of the im- broglio in every way, political and financial, "on top." Though her claims are, in fact, of very doubtful validity, she has got in hard cash £68,000, has contrived to create a certain amount of suspicion between America and Britain—anything is better than nothing in such a case—and has immensely increased her general prestige as a Power which whenever it has a share in an incident of any kind is sure to come out with the biscuit in its rnouth,—witness China. Samoa, and now Venezuela. That is Germany's side of the account. Now look at ours. The Government has lost weight at home, irritated the British people, alarmed the American, made the Germans as a nation even nrore hostile than before, spent a great deal of money on a blockade, lowered the prestige of our Foreign Office as a businesslike and intelligent Department, and obtained 25,000 in cash ! Truly may Mr. Walter Long say we have "muddled through "; but we must add, in opposition to him,—' and have come out at the bottom.'