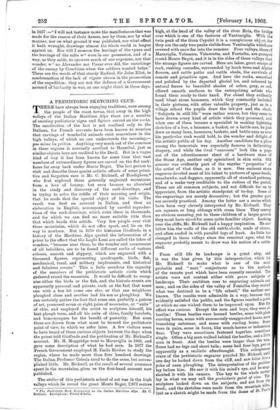 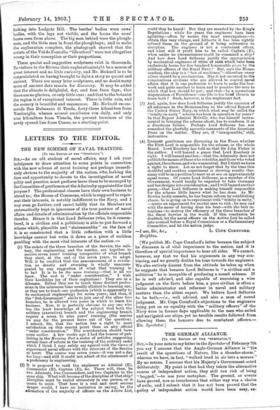 THERE have always been engaging traditions, even among the people of the coast towns, that away in the high . valleys of the Italian Maritime Alps there are a number of exciting prehistoric signs and figures carved on the rocks.

• The recollection of the fact is not confined . only to the Italians, for French servants have been known to mention that carvings of wonderful animals exist somewhere in the high valleys, of which no one understands the meaning,— pea mime les pretres. . Anything very much out of the common in: these. regions is currently ascribed to Hannibal, just as similar objects here are credited to the Devil. But in a vague kind . of way it has been known for some time that vast numbers of extraordinary figures are carved on the flat rock- faces far away back under Monte Begot. The last person to visit and describe these quaint artistic efforts of some primi- tive and .forgotten race is Mr. C. Bicknell, of Bordighera,* who first explored these generally neglected mountains from a love of botany, but soon became so absorbed in the study and discovery of the rock-drawings, and in trying to solve the riddle of their meaning and origin, that he made that the special object of Isis visits. The result was first in . account. in Italian, and then an elaboration in English, accompanied by careful reproduc- tions of the rock-drawings, which exist there in thousands, and for which we can find no more suitable title than - that which heads this article. Very 'few pCople ever visit these mountains, which do not offer sport, and lie on the way to .nowhere. But in 1650 the historian Gioffredo in a history of the Maritime Alps quoted the information of a priest to the effect that the Laghi Luui are called the lakes of wonders, "because near them, to the wonder and amazement of all beholders, are to be found different roeke of various colours', smooth and slippery, which are engraved with a thousand figures. representing quadrupeds,- birds, • fish, mechanical, rural, and military implements, and historical and fabulous events." This a little overdoes the Capacity of the members of the prehistoric artistic circle which gathered round the mountain. It would be difficult to recog- nise either the birds or the fish, and. the historic events are apparently personal and private, such as the fact that some one with a hoe hit some one else, or that one neighbour ploughed alone and another had his son as plonghboY. We can certainly gather the fact that some One, probably a patron of art, possessed seven or eight pairs of moccasins, Or " suits " of skin, and employed the artist to sculpture himself, his 'heat plough team, and all his suits of skins, family hatchets, and bone-Scrapers for the benefit of posterity; But even these are drawnfrom what must be termed the prehistoric paint of view, to which we. refer .later. A few visitors seem to have heard of these curious objects _between the days when the priest told Gioffredo and the publication of Mr. Bicknell's account. Mr. M. Moggridge went to Maraviglia in 1868, and gave some description of what lie had- seen. In 1877 the French Government employed M. Emile Riviere to study the region, where he made more than four hundred drawings. The Italian Professor Celesia tried to do the same, but accom- plished little. Mr. Bicknell, as the result of several summers spent in the mountains, gives us the first-hand account now published.

The atelier of this prehistoric. school of art was in the high valleys which lie round the great Monte Begbt, 2,873 metres • The Prehistoric Rock Engravings' 411 the Italian Maritime Aips. By C. BiCkneU BortligLera : Pietro high, at the head of the valley of the river Roia, the bridge over -"which is one of the features of Ventimiglia. With the twin peak of the Gran Capulet it is a conspicuous obj3et, for they are the only two peaks visible from Ventimiglia which are covered with snow far into the summer. Four valleys, those of Maraviglia, Valmasca, Valanretta, and Fontalba, are grouped round Monte Begot, and it is in the sides of these valleys that the strange figures are carved. Here are lakes, great scalps of rock, rushing cascades, surrounded by larch trees and Alpine flowers, and cattle paths and cattle sheds, the survivals of remote and primitive ages. And here the rocks, smoothed and polished by the departed glacial ice, and coloured by natural forces to beautiful shades of ochre, grey, or red, offered smooth surfaces to the enterprising artists who found them ready to their hand. For chisel they evidently used blunt stone hammers, which they constantly included in their pictures, with other valuable property, just as in a village school the pupils draw the ink-pot and the clock. " Subjects in still life" were rather scarce, but they seem to have drawn every kind of article which they possessed, and when one of them became a specialist in making lightning sketches of a hoe, a hammer, a basket, or a battle-axe, be just drew as many hoes, hammers, baskets, and battle-axes as ever his particular rock would hold, to the wonder and delight of the artistic public of his day. Another candidate for a place among the immortals was especially famous in delineating drapery, and while the rival " canvases " look like a page out of the advertisement sheet of a hardware store of the Stone Age, another only specialised in skin suits. Old armour was evidently part of the regular " properties " of the artist of that time, as it is now. One eminent stone engraver devoted most of his talent to pictures of spear-heads, tomahawks, and daggers, apparently all of standard patterns, and of a make very creditable to the cutlers of the period. These are all common subjects, and not difficult for us to hppreciate, from the artistic standpoint of to-day. Some of the engravings are merely decorative ; 'but the greater part are severely practical. Among the latter are a series which have been very cleverly interpreted by Mr. Bicknell. They are squares, or long oblongs with cross lines. They convey no obvious meaning, yet to these children of a larger growth they must have stood for some quite familiar object. Looking over the cliffs, Mr. Bicknell had a happy inspiration. He saw below him the walls of the old cattle-sheds, made of stones, and often roofed in with parallel logs of larch. As little has changed in those valleys since the remotest ages, what the engraver probably meant to draw was his notion of a cattle. shed.

From still life to landscape is a great, step, and it was the hint given by this interpretation which led Mr. Bicknell to make what is one of the most probable and " neat " conjectures as to the methods of the remote past which have been recently recorded. The artists_ were not content either with genre subjects or landscape. Their ambition, rose to engraving animals and men ; and on the sides of the valley of Fontalba they started what was destined to be a "life school," the earliest ever known. The results were admirable in a way, because they evidently satisfied the public, and the figures reached a point at which no one wished them to be improved upon. But the effect was curious. Except the men and boys, they were all beetles ! These beetles were horned beetles, some with plain curving horns, some with enormously exaggerated horns, were branching antennae, and some with curling. horns. Some were in pairs, some in fours, like coach-horses or industrious fleas. They were sometimes fastened together, sometimes single. Often a big man walked behind the beetles, and a little man in front. And the beetles were larger than the men. Some had no legs and short tails ; some had four, legs, Put on apparently . as a realistic afterthought. This coleopterous craze of the prehistoric engraver puzzled Mr. Bicknell, until one day he looked down from the cliff, and saw below hiss a yoke of oxen ploughing. The interpretation of the problem lay before him. He saw it with his mind's eye, and he snap- just as a- sketch might be made from the dome of St Paul' maTttheer

shotted it with his camera. The key to the whole

lay in what we may call the prehistoric point of view.

sculptors looked down on the subjects, and not from level; and the sketches were made from the mountain

looking into Ludgate Hill.. The beetles' bodies were cows' - 'bodies, with the legs not visible, and the horns the cows' horns .seen from above. The big, men behind were the plough- men, and the little men in front the ploughboys; and to make the explanation complete, the photograph showed that the artists of the Val de Fontalba "life school" were not altogether wrong in their conception or their proportions.

These quaint and suggestive sculptures exist in thousands. To visitors to the Riviera their explorationimight be a source of great interest and no little curiosity, and Mr. Bicknell is to be congratulated on having brought to light a story so quaint and ancient. There are many later sculptures, and no doubt many more of ancient date remain for discovery. It may be added that the climate is delightful, dry, and free from fogs ; that there are no glaciers, or only little ones; and that to the botanist the region is of exceptional interest. There is little rain, and the scenery is beautiful and uncommon. Mr. Bicknell recom- mends San Dalmazzo di Tenda, forty-three kilometres from Ventimiglia, whence several omnibuses run daily, and only nine kilometres from Vienola, the present terminus of the newly opened line from Cuneo, as a starting-point.