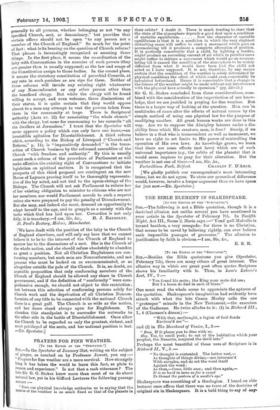 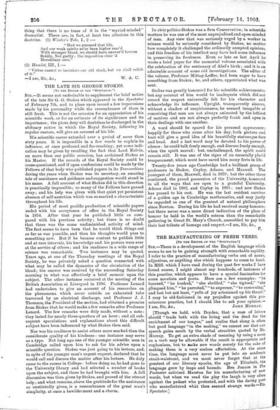 [To THE EDPfOR OF THE "SPECTATOR:]

SIR,—Besides the Bible quotations you give (Spectator, February 7th), there are many others of great interest. The allusive way in which our great poet often quotes Scripture shows his familiarity with it. Thus, in Love's Labour's Lost, IV., 3 :— " You found his mote ; the King your mote did see; But I a beam do find in each Of three."

One must read the whole scene to appreciate the aptness of the quotation. Shakespeare's imagination had evidently been struck with what the late Canon Mozley calls the one "grotesque" miracle in the New Testament,—the exorcism of the Gadarene. He twice alludes to it : (1) in Richard

Shy. Yes, to smell pork; to eat of the habitation which your prophet, the Nazarite, conjured the devil into?'

Perhaps the most beautiful of these uses of Scripture is in Richard II., V., 5 :— "No thought is contented. The better sort,— As thoughts of things divine,—are intermix'd With scruples, and do set the word itself Against the word : As thus,—Come, little ones; and then again,— It is as hard to come as for a camel

To thread the postern of a needle's eye."

• Shakespeare was something of a theologian. I heard an able lecturer once affirm that there was no trace of the doctrine of original sin in Shakespeare. It is a bold thing to say of any.

thing that there is no trace of it in the "myriad-minded" dramatist. There are, in fact, at least two allusions to this doctrine. (1) Winter's Tale, I., 2 :—

" Rad we pursued that life, And our weak spirits ne'er been higher rear'd With stronger blood, we should have answer'd heaven Boldly, Not guilty; the imposition clear 'd Hereditary ours.'