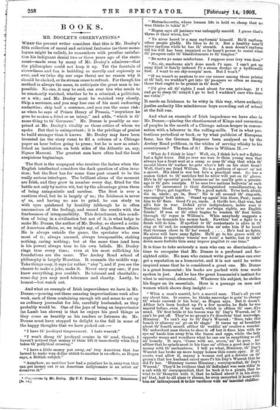 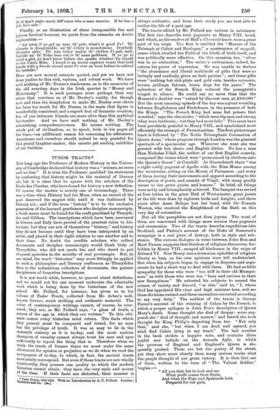 MR. DOOLEY'S OBSERVATIONS.* WHEN the present writer considers that this is Mr. Dooley's fifth collection of moral and satirical fantasias (as these mono-

logues might be called), he remembers with peculiar satisfac- tion his indignant denial two or three years ago of the state- ment—made even by many of Mr. Dooley's admirers—that the philosopher could not keep it up. Yet the fountain of shrewdness and fun is bubbling as merrily and copiously as ever, and we.(who dip our cups there) see no reason why it should be choked, or its stream cease to refresh. For though his Method is always the same, to anticipate the great man is im- possible: No one, it may be said, can ever tire who needs to be constantly watched, whether he be a criminal, a politician, or a wit ;. and Mr. Dooley must be watched very closely. Skip-a sentence, and you may lose one of his most endearing audacities; skip half a sentence, and you run the same risk:

as when he says of Prince Henry of Prussia, " inywhere he goes he makes a frind or an inimy," and adds, "which is th' same thing to th' Germans." Mr. Dunne is possibly as sur-

prised at Mr. Dooley's vitality as those critics of whom we spoke. But that is unimportant ; it is the privilege of genine to build stronger than it knows. Mr. Dooley may have been invented (as the story runs) to fill a column of a Chicago paper an hour before going to press ; but he is now as esta,b

lished an institution on both sides of the Atlantic as, say? Signor Marconi. The greatest men have often had the least auspicious beginnings.

Ilion; but the Scot has for Some time past ceased to be the 'really serious interloper. The brilliant aliens of the moment

are Irish, and they grow in number every day, fitted for the battle not only by native wit, but by the advantage given them

of being antagonistic and ' careless. The Scot is ever a cautious rival, but he is largely of us; the Irishman is never

of us, and having no axe to grind, he can study us . with eyes quickened by hostility (although he is often unconscious of the feeling), and record the results with the fearlessness of irresponsibility. This detachment, this condi- tion of being in a civilisation but not of it, is what helps to make Mr. Dunne, the author of Mr. Dooley, so shrewd a critic of American affairs, or, we might say, of Anglo-Saxon affairs. He is always outside the game, the spectator who sees

most of it; always amused, always irresponsible, staking nothing, caring nothing; but at the same time (and here is his power) always true to his own beliefs. Mr. Dooley rings true every time; even at his most rollicking his

foundations are the same. The Archey Road school of philosophy is largely Horatian. It counsels the middle way.

Take things easy, it says (or rather, " aisy "), and if you see the chance to make a joke, make it. Never envy any one; if you knew everything, you couldn't. Be tolerant and charitable ;

some day you may need tolerance and charity. Lastly, be honest—but watch out.

And what an example of Irish improvidence we have in Mr.

Dunne,—pouring out these amazing improvisations week after week, each of them containing enough wit and sense to set up an ordinary journalist for life, carefully husbanded, as they probably would be. One of the joys of being an improvisator (as Lamb has shown) is that he enjoys his good things as

they come as heartily as his readers or listeners do. Mr.

Dunne must have stopped to delight to the full in some of the happy thoughts that we have picked out :—

"I have a little money put away, an' ivry American that has Issued to make wan dollar shtick to another is ex-officio, as Hogan says, a British subjick."

"Annyhow, no matther how bad a painther he is, annywan that can get money out iv an American millyionaire is an artist an' desarves it."

"Matsachoosetts, where human life is held so cheap that no wan thinks iv takin' "Hogan says all janinses was unhappily marrid. I guess that's three iv their wives, too."

"Ye niver heerd iv a man rayformin' himself. He'll rayform other people gladly. He likes to do it. But a healthy maul' niver rayform while he has th' strenth. A man doesn't rayform till his will has been impaired so he hasn't power to resist what th' pa-apers calls th' blandishments iv th' timpter."

"Be news ye mane misfortune. I suppose near ivry wan does," "No, sir, masheens ain't done much f'r man. I can't get up anny kind iv famly inthrest f'r a steam dredge or a hydhraulic hist. I want to see sky-scrapin' men. But I won't."

"If we wasn't so anxious to see our names among those prisint at th' ball, we vradden't get into th' pa-apers so often as among those that ought to be prisint in th' dock.'

"I'd give all th' rights I read about for wan priv-lege. If I cud go to sleep th' minyit I go to bed I vrudden't care who done me votin'."

It needs an Irishman to be witty in this way, where audacity jostles audacity like mischievous boys crowding out of school at the full run.

And what an example of Irish impudence we have also in Mr. Dunne,—placing the chastisement of Kings and correction of peoples in the mouth of a Chicago saloon-keeper in conver- sation with a labourer in the rolling-mills. Yet in what pre- tentious periodical or book, or by what publicist of European fame, has the German Emperor been analysed as by the Archey Road publican, in the whiles of serving whisky to his countrymen? The fun of it ! Here is William IL :—

"What do I think iv him? Well, sir, I think he's not a fighter but a fight lover. Did ye iver see wan iv thim young men that always has a front seat at a scrap so near th' ring that whin th' second blows th' wather he gets what's left on his shirt front?

Well, that's me frind Willum. He is a pathron of spoort an' not a spoort. His ideel is war but he's a practical man. He has a season ticket to th' matches but he niver will put on th' gloves. He's in th' spoortin! goods business an' he usu'lly gets a percint- age iv th' gate receipts. If he sees two nations bellowin' at each other th' assurances iv their distinguished considheration, he says : Boys, get together. 'Tis a good match. Ye're both efraid. Go in, uncle ; go in, Boer.' He is all around th' ring-side, encouragin' both sides. Stand up again' him there, Paul; male him to th' flare. Good f'r ye, uncle. A thrifle low, that wan, but all's fair in war. Defincl ye'er indipindance, noble sons iv Teutonic blood. Exercise ye'er soy'reign rights, me English frinds.' If wan or th' other begins to weaken th' first bottle through th' ropes is Willum's. Whin annybody suggests a dhraw, he demands his money back. Nawthin' but a fight to a finish will do him. If ayether iv th' contestants is alive in th' ring at th' end, he congratulates him an' asks him if he heerd

that German cheer in th' las' round. He's had no fights. He niver will have anny fights. He'll go to his grave with th' repytation iv nayether winnin' nor losin' a battle, but iv takin' down more forfeits thin anny impror pugilist iv our time."

It is time to take seriously a man who can so discriminate,— time to recognise that Mr. Dunne is a profound and far- sighted critic. No man who cannot write good sense can ever get a reputation as a humourist, and it is not until he writes inspired sense that he is considered a great one. Mr. Dunne is a great humourist : his books are packed with true words spoken in jest. And he has the great humonrist's instinct for what is universal, elemental. Whatever his subject, he strikes his finger on its essentials. Here is a passage on men and women which shows deep insight :—

"Whin a man's marrid, he's a marrid man. That's all ye can

say about him. Iv worse, he thinks marredge is gain' to change th' whole current iv his bets', as Hogan says. But it doesn't. Afther he's been hooked up f'r a few months, he finds he was marrid befure, even if he wasn't, which is ofthen th' case, Wye mind. Tlf first bride iv his bosom was th' Day's Wnrruk, an' it can't be put off. They' se no groun's f'r dissolvin' that marred, Hinnissy. Ye can't say to th' Day's Wurruk : 'Here, take this bunch iv alimony an' go on th' stage.' It turns up at breakfast about th' fourth month afther th' weddin' an' creates a scandaL Th' unforchnit man thries to shoo it off but it fixes him with its eye an' hauls him away fr'm the bacon and eggs, while the lady opposite weeps and wondhers what he can see in annything so old an' homely. It says, 'Come with me, moon,' an' he goes. An' afther that he spinds most iv his time an' ofthen a good deal iv his money with th' enchantress. I tell ye what, Hinnissy, th Day'a Wurruk has broke up more happy homes thin comic opry. If th' coorts wud allow it, manny a woman cud get a divorce on th' groan's that her husband cared more Pr his Day's Wurruk thin' he did Fr her. 'Hinnissy Var1311.4 Hinnissy; corryspondint, th Day's Wurruk! They'd be iviclince that th'de&tdant was seen rid& in an' that, lost to all sinse iv shame, he Oven. escoorted home with picnic, that he a cab with th' comspondint, that he took #4° a wint to th' theaytre with it, tiiat he talked about it in his sleel?, him au' inthrajamed it to his vanhoos wife se innobint childlier•

So it don't make much dirrence who a man marries. If he has a job, he's safe."

Finally, as an illustration of sheer irresponsible fun and joyous farcical humour, we quote from the remarks on Arctic exploration :—

" An' amen if ye get up near th' pole, what's it good Fr Th' climate is disagreeable, an' th' s'ciety is monotonous. Ivrybody dhresses alike. Th' wan tailor makes th' clothes Fr pah, mah, Lucille an' th' Polar bear out iv th' same patthern. If ye go to coort a girl, ye don't know befure she speaks whether 'tis hersilf or her Uncle Mike. I heerd iv an Arctic explorer wanst that held hands with a Swede sicond mate Fr over an hour befure he ralized his mistake."

Here are now several extracts quoted, and yet we have not done justice to this rich, various, and robust work. We have said nothing of Mr. Dunne's tenderness, as in the memories of the old courting days in the Irish quarter in "Money and Matrimony." It is such passages more perhaps than any other that convince us of Mr. Dooley's reality, for though now and then the temptation to make Mr. Dooley over clever has been too much for Mr. Dunne, in the main that figure is wonderfully consistent and a superb feat of dramatic creation; few of our intimate friends are more alive than this mythical bar-tender. And we have said nothing of Mr. Dooley's astonishing comprehensiveness. He misses nothing. The whole pot of civilisation, so to speak, boils in his pages all the time,—an additional reason for esteeming his utterances.

Americans and ourselves should indeed be very grateful for this genial laughter-maker, this caustic yet smiling exhibitor of our frailties.