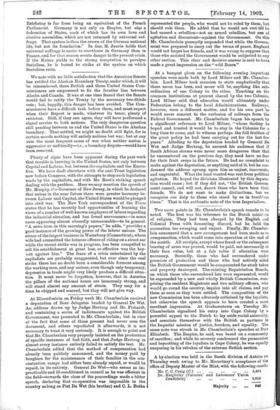 Page 2, 14 February 1903 — We note with no little satisfaction that the American Senate
Close

We note with no little satisfaction that the American Senate

has ratified the Alaskan Boundary Treaty, under which, it will be remembered, three British and three United States Com- missioners are empowered to fix the frontier line between Alaska and Canada. It was at one time feared that the Senate would fail to ratify the Treaty by the necessary two-thirds vote; but, happily, this danger has been avoided. The Com- missioners have a difficult task before them, and must expect when their Report is made, whatever its tenor, plenty of criticism. Still, if they can agree, they will have performed a signal service to both nations. The only dangerous question still pending between us and the United States is the Alaskan boundary. That settled, we might no doubt still fight, for in certain moods nothing will satisfy nations but war; but at any rate the most frequent cause of war when neither nation is aggressive or unfriendly—i.e., a boundary dispute—would have been removed.