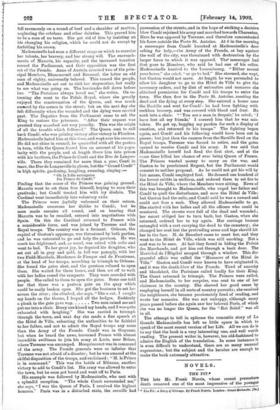 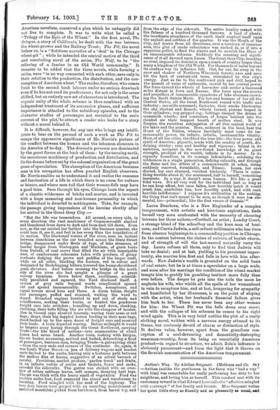 THE PIT.* THE late Mr. Frank Norris, whose recent premature death removed one of the most impressive of the younger

American novelists, conceived a plan which he unhappily did not live to complete. It MO to write what he called a "Trilogy of the Epic of the Wheat." In the first novel, The Octopus, a story of California, he dealt with the war between the wheat-grower and the Railway Trust; The PIE, the novel before us, is a "fictitious narrative of a deal ' in the Chicago wheat-pit " ; while he intended the central motive of the third and concluding novel of the series, The Wolf, to be "the relieving of a famine in an Old World community." It remains to be added that the three novels, while forming a series, were "in no way connected with each other, save only in their relation to the production, the distribution, and the con- sumption of American wheat." The reader, therefore, who comes fresh to the second book labours under no serious drawback even if he has not read its predecessor; for not only is the scene shifted, but an entirely new set of characters is introduced. The organic unity of the whole scheme is thus combined with an independent treatment of its successive phases, and sufficient importance is attached to the subsidiary episodes, and to the character studies of personages not essential to the main current of the plok'to attract a reader who looks for a story without a moral behind it.

Laura Dearborn, who is a New Englander of a complex temperament, with artistic and histrionic aspirations, finds herself very soon confronted with the necessity of choosing between her three suitors,—Corthell, an artist; Landry Court, a strange blend of the schoolboy and the keen man of busi- ness; and Curtis Jadwin, a self-reliant millionaire who has risen from obscure beginnings to a commanding position in Chicago. In the contest between the claims of culture, of boyish charm, and of strength of will the last-named naturally carry the day. Laura refuses all three, only to find that Jadwin will take no denial; and at last, yielding to his persistent impor- tunity, she marries him first and falls in love with him after- wards. Now Jadwin's wealth is grounded on the solid basis of real estate, but he is at times a speculator on a large scale, and soon after his marriage the condition of the wheat market tempts him to gratify his gambling instinct more fully than ever before. The deeper be gets into the toils the more he neglects his wife, who wields all the spells of her womanhood in vain to recapture him, and at last, hungering for sympathy and humiliated by her ill-success, is on the point of eloping with the artist, when her husband's financial failure gives him back to her. There has never been any other woman for him: the Wheat Pit was the belle dame sans frnerci, and with the collapse of his schemes he comes to his right mind again. This is in very brief outline the plot of a really striking novel, written with a nervous energy attuned to its theme, but curiously devoid of charm or distinction of style. It derives value, however, apart from the grandiose con- ception of a soul-devouring and domesticity-destroying mammon-worship, from its being an essentially American product—in regard to structure, we admit, Zola's influence is obviously paramount—and from the light that it throws on

the feverish concentration of the American temperament.