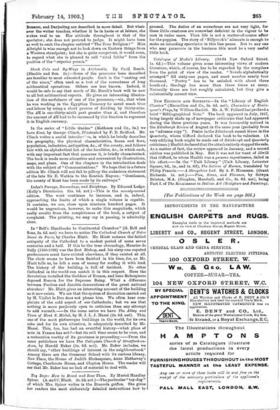 In "Bell's Handbooks to Continental Churches" (G. Bell and Sons,

2s. 6d. net) we have to notice The Cathedro2 Church of Notre Dame de Paris, by Charles Hiatt. Mr. Hiatt reduces the fabled antiquity of the Cathedral to a modest period of some seven centuries and a half. If this be the true chronology, Maurice de Sully (1160-1196) was the first Bishop, and .his sixty-one reputed predecessors must have existed elsewhere, if they existed at all. The choir seems to have been finished in his time, for, as Mr. Hiatt tells us, he left a sum of money for roofing it with lead. The history of the building is full .of incident. No other Cathedral in the world can match it in this respect. Here the Revolution installed the Goddess of Reason, and here Robespierre deposed Reason -for the Supreme Being. What a difference between Puritan and ja,cobin desecrations of the great national churches ! Mr. Hiatt gives an interesting account of the building as it now exists. We see that the system of decoration carried out by H. Viollet le Due does not please him. We often hear com- plaints of the cold aspect of our Cathedrals; but we see that nothing is more perilously open to criticism than any attempt to add warmth.—In the same series we have The Abbey and Town of Mont S. Michel, by H. J. L. J. Masse (2s. 6d. net). This, one of the most picturesque buildings in the World, for its own sake and for its own situation, is adequately described by Mr. Masse. This, too, has had an eventful history—what place of note in France has not ?—but its evil time seems to be over, and a restoration worthy of its greatness is proceeding.—From the same publishers we have The Collegiate Church of Stratferd-on- Avon, by Harold Baker (1s. 6d. net). Mr. Baker includes, we should say, "other buildings of interest in the neighbourhood?' Among these are the Grammar School with its curious library, New Place, the House of Judith Shakespeare, Anne Hathaway's Cottage, Charlecote House, and Clopton House. The reader will see that Mr. Baker has no lack of material to deal with.