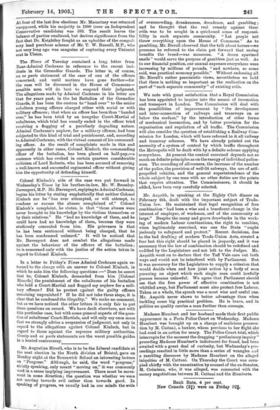 Page 3, 14 February 1903 — Mr. Augustine Birrell, who is to be the Liberal candidate
Close

Mr. Augustine Birrell, who is to be the Liberal candidate

at the next election in the North division of Bristol, gave on Monday night at the Brunswick School an interesting lecture on "Progress." Although, be said, the Word "progress," strictly speaking, only meant "moving on," it was commonly amain a sense implying improvement. There must be move- ment in some direction; the question was whether we were not moving towards evil rather than towards good. In speaking of progress, we usually bad in our minds the evils of overcrowding, drunkenness, decadence, and gambling ; and he thought that the real remedy against these evils was to be sought in a quickened sense of responsi- bility in each separate community. "Let people not throw everything upon the House of Commons." As to gambling, Mr. Birrell observed that the talk about horses—we presume he referred to the claim put forward that racing benefits the breed—was nauseous. "A dozen spavined snails" would serve the purpose of gamblers just as well. As to our financial position, our annual expenses everywhere were increasing by millions of pounds, "and nowhere, so some said, was practical economy possible." Without endorsing all Mr. Birrell's rather pessimistic views, nevertheless we hold that there is nothing so important as the realisation on the part of "each separate community" of existing evils.