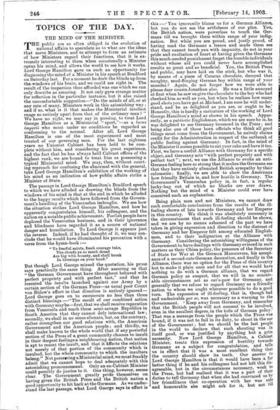 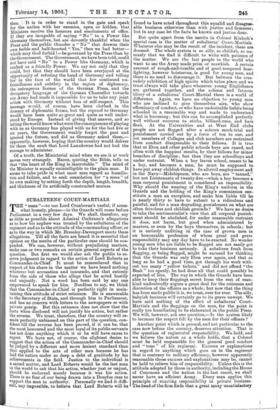 THE MIND OF THE MINISTER.

THE -na th national affairs to speculate as to what are are so* often obliged e ideas public liged in the evolution of that move Ministers, and to attempt to form an estimate of how Ministers regard their functions, that it is ex- tremely interesting to them when occasionally a Minister opens his mind, and allows the world to see how it works. Lord' GeorgeHamilton gave us Such an oPportunity for diagnosing the mind of a Minister in his speech at Bradford on :Saturday last. For a moment he dreiv the blinds up from the.windows of his brain, and we' could see right in. The result of the inspection thus afforded was one which we can only describe as amazing. It not only gave strange matter for reflection in the particular instance, but it also raised the uncomfortable suggestion—" Do the minds of all, or at any rate of many, Ministers work in this astonishing way; and if so, *hat is it that makes the Ministerial intellect range so entirely apart from that of the ordinary man?" We have no right, we may say in passing, to treat Lord George Hamilton as a Ministerial "sport,"—as a /uses imperii who must under no conditions be regarded as conforming to the normal. After all, Lord George Hamilton is one of the most experienced and most trusted of our governing men. For the last eighteen years no Unionist Cabinet has been held to be com- plete without him, and considering his great experience, and the fact that he has always held Cabinet offices of the highest rank, we are bound to treat him as possessing a typical Ministerial mind. We may, then, without court- ing reproach for confusing the abnormal with the general, take Lord George Hamilton's exhibition of the working of his Mind as an indication of how public affairs strike a Meister of State. • The passage in Lord George Hamilton's Bradford speech to which we have alluded as drawing the blinds from the windows of his mind is that at the end in which he alluded to the happy results which have followed from the Govern- ment's handling of the Venezuelan imbroglio. We see how the situation strikes Lord George 'Hamilton, and how he apparently congratulates himself, his colleagues, and the nation on a notable public achievement, Foolish people have deplored. the Venezuelan business, and in their ignorance and blindness have regarded it as a source of national danger and humiliation. To Lord George it appears just the reverse. Indeed, if ha had thought of it, we may con- clude that he would have illuminated his peroration with a verse from the hymn-book :—

"Ye fearful saints, fresh courage take, The clouds ye so much dread Are big with bounty, and shall break In blessings on your head."

But though Lord George missed the quotation, his prose says practically the same thing. After assuring us that "the German Government haye throughout behaved with perfect propriety and with perfect tact," and that he resented the insults launched age' inst our Army by a certain section of the German Press—as usual poor Count von .Billow's effort in that direction is entirely ignored— Lord George goes on to enumerate no less than three distinct blessings :—" The result of our combined action with Germany may be—first, that we shall receive reparation from Venezuela and teach these semi-savage Republics in South America that they cannot defy international law; secondly, we shall in no sense alienate, but, on the contrary, rather strengthen our good relations with, the American Government and the American people; and thirdly, we shall make known to the whole world that if any powerful section of the Press of a great community chooses to insult in their deepest feelings a neighbouring nation, that nation is apt to resent the insult, and that it Affects the relations not merely of that portion of the community which is insulted, but the whole community to whiCh the insulters belong." Not possessing a Ministerial mind, we must frankly admit that we cannot hope to. deal adequately with this astonishing pronouncement. Only an ex-Cabinet Minister could possibly do justice to it. One thing, however, seems clear. The Government greatly pride themselves on having given the British Press and the British 'nation 'a good opportunity to hit back-at the Germans. As we under- stand the last passage, what Lord , George says in effect is this := You ignorantly blame us for a German Alliance, but you do not see the artfulness of our plan. You, 'the British nation, were powerless to touch the Ger- mans till we brought them within range of your indig- nation. But while you are proud, and justly proud, of having read the Germans a lesson and made them see that they. cannot touch you with impunity, do not in your pride and exultation of heart at having given the Germans this much-needed punishment forget the humble individuals without whose aid you could never have accomplished results so great and so beneficial. You, the British Press and public, may have laid on the stick, but who was it, by means of a piece of Caracas chocolate, decoyed that naughty, mud-flinging German boy within range of your missiles? Again, do not forget how we were able-. to please dear cousin Jonathan also. He was a little annoyed at first when he saw us give the chocolate to the boy who had checked him as well as you, but when he realises how many good shots you have got at Michael, I am sure he will under- stand, and be as delighted as you are, or ought to be.' Honestly, this is hardly a caricature of the working of Lord George Hamilton's mind as shown in his speech.. Appar- ently, as a patriotic Englishman, which we are sure he is, he was delighted to see Germany trounced in the Press; and being also ease of those born officials who think all good things must come from the Government, he naively claims credit for the Administration in respect of the outbreak of public feeling against Germany. In fact, in the mind of the Minister it seems possible to eat your cake and have it too. First, we have a useful Alliance with Germany for a specific object, and Germany acts "with perfect propriety and with perfect tact"; next, we use the Alliance to evoke an anti. German feeling here so strong that it makes the Germans see that they have entirely alienated British sympathy by their calumnies; finally, we are able to show the .Americans how friendly Britain is, and how hostile is Germany. The Government's Venezuelan policy is, in fact, a regular lucky-bag out of which no blanks are ever drawn. Nothing but the mind of a Minister could ever have conceived such an explanation.

Being plain men and not Ministers, we cannot draw such comfortable conclusions from the results of the ill- feeling shown of late towards Germany and her Emperor in this country. We think it was absolutely necessary in the circumstances that such ill-feeling should be shown, and we are by no means ashamed of the part we have taken in giving expression and direction to the distrust of Germany and her Emperor felt among educated English- men, and to their indignation at• the Alliance with Germany Considering the astonishing willingness of the Government to have dealings with Germany evinced in such matters as their China policy, the presence of the Secretary of State for War at the German Manceuvres, his accept- ance of a second-rate German decoration, and finally in the Alliance, there was no option for the Press of this country but to make it plain once and for all that we would have nothing to do with a German alliance, that we regard German policy as suspect, that we will in no conceiv- able circumstances act as cat's-paw for Germany, and generally that we refuse to regard Germany as a friendly nation to whom we ought wherever possible to do a good turn. The expression of ill-feeling, that is, though bad and undesirable per se, was necessary as a warning to the Government. ' Keep away from Germany, and remember that the British people will not consent to be involved, even in the smallest degree, in the toils of German policy.' That was a message from the people which the Press was bound, if it was not to fail in its duty, to shout in the ear of the Government';. but we should be the last people in the world to declare that such shouting was in itself good, or was justified by anything but a grim necessity. Now Lord George Hamilton, a Cabinet Minister, treats this expression of hostility towards Germany as a subject for congratulation, and Jells us in effect that it was a most excellent thing that the country should show its teeth. Our answer to Lord George Hamilton is that it would have been a far better thing if he and his colleagues had not left this dis- agreeable, but in the circumstances necessary, work to the Press, but had realised that it was a part 'of their duties to tell Germany that when she had convinced os by her friendliness that co-operation with her was saie and honourable she might ask for it. but not till then. it is in order to stand in the gate and, speak. for the nation with her enemies, open or hidden, that Ministers receive the honours and emoluments of office. If they are incapable of saying "No " to a Power like. Germany themselves, but are devoutly thankful when the Preie and the public thunder a " No " that drowns their own feeble and half-hearted "Yes," then we had better-- whichmay.God forbid !—be governed by the Press than by the Government. The Government, we have been told, could- not have said " No " to a Power like Germany, which is ranked as a friendly Power. We say not only that they could, but that they should have been overjoyed at the opportunity of refusing the hand of Germany and telling her in the face of the world that her continued un- friendliness and subtlety in the region of diplomacy, the -outrageous license of the German Press, and the derogatory language of the German Chancellor towards our Army had made it impossible for us to take any joint action with Germany without loss of self-respect. This message would, of course, have been clothed in the decency of diplomatic forms, but the reproof to Germany would have been quite as great and quite as well under- stood by Europe. Instead of giving_ that answer, and so letting theworld know what were the consequences of playing with us as Germany has played with us for the last five or six years, the Government weakly forgot the past and ignored the future, and did as Germany asked them,— apparently, however, hoping that the country would deliver for them the snub that Lord Lansdowne had not had the courage to administer.

Of a truth, the Ministerial mind when we see it at work moves very strangely. Bacon; quoting the Bible, tells us that "the heart of the King is inscrutable." The mind of the Minister is equally unintelligible to the plain man. It seems to take pride in what most men regard as humilia- tion and failure, and to seek consolation for "a mess" of its own making by setting forth the depth, length, breadth, andd, thickness of its artificially constructed morass.