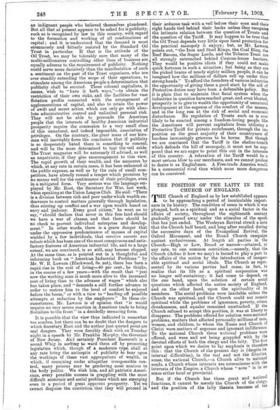 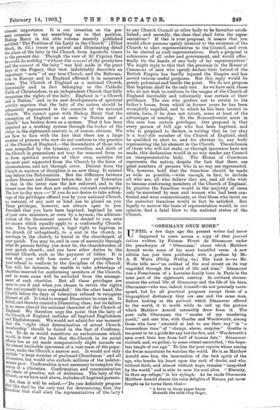 THE POSITION OF THE LAITY IN THE CHURCH OF ENGLAND.

THE Church of England as by law established appears to be approaching a, period of incalculable import- ance in its history. The condition of coma in which it was plunged, both as a spiritual and as a social factor in the affairs of society, throughout the eighteenth century gradually passed away under the stimulus of the epoch that has just ended. The Wesleyan Revival struck a note that the Church half heard, and long after recalled during the successive days of the Evangelical Revival, the Oxford Movement, and the Broad Church campaign against exclusiveness. At- length all parties in the Church—High or Low, Broad or narrow—attained, at any rate, to one common conviction,—namely, that the Church (define it how we may) is bound to play a part in the affairs of the nation by the introduction of insepar- able spiritual and social ideals. The Church as repre- sented by its various parties had come, in fact, to realise that its life as a spiritual corporation was no longer self-sustaining ; it had come to depend, on the one hand, upon the solution of certain social questions which affected the entire society of England, and on the other hand, upon the spirituality of its members. The social problems were insoluble unless the Church was spiritual, and the Church could not remain spiritual while the problems of ignorance, poverty, crime, drunkenness, and squalor remained unattacked. If the Church refused to accept this position, it was at liberty to disappear. The problems offered for solution were national problems, matters that affected personally, millions of men, women, and children, to whom the Name and Church of Christ were matters of supreme and ignorant indifference. To the national Church these national problems were offered, and were and are being grappled with by the devoted efforts of both the clergy and the laity. The first point upon which we desire to lay emphasis is therefore this : that the Church of the present day is (despite its internal difficulties), in the real and not the Erastian sense, the national Church,—a Church alive to national needs, a Church whose interests are coterminous with the interests of the Empire, a Church whose " note " is in no sense either local or provincial. But if the Church has these great and national functions, it cannot be merely the Church of the clergy, and the position of the laity therein becomes of the utmost. importance. It is our intention on the, pre- sent occasion to say something as to that , position. Bishop Barry in his able volume recently published entitled." The Position of the Laity in the Church" (Elliot Stock, 2s. 6d.) traces in patient and illuminating detail the place of the laity in the Church from Apostolic times to the present day. Though the view of St. Cyprian that lie could do nothing "without the counsel of the presbyters and the consent of the laity" was laid aside in the great days of the Papacy, that view indubitably describes an important " note " of any true Church, and the Reforma- tion in Europe and in England affirmed it in measured terms. The Church of England as - a national Church, historically and in fact belonging to the Catholic Faith of Christendom, is an independent Church that fully recognises the rights of the laity. England is "a Church and a Nation," and in its new developments of spiritual activity requires that the laity of the nation should be adequately represented in the councils of the national Church. We cannot agree with Bishop Barry that the conception of England as at once "a Nation and a Church" has broken down as a system. That it has been impaired as a working system through the ladies of the clergy in the eighteenth century is, of course, obvious. We are faze to face with the fact that there are a large number of persons who now do not conform to the practice of the Church of England,—the descendants of those who were compelled by the tyranny, cowardice, and sloth of the Church in generations not very far removed from us to form spiritual societies of their own, societies for the most part separated from the Church by the force of circumstances, and not through error. Dissent from the Church in matters of discipline is no new thing. It existed long before the Reformation. But the difference between modern Dissent and Dissent before the Act of Toleration is that in the latter case the law enforced, and in the former case the law does not enforce, outward conformity.

The law to-day says If you do not desire to take advan- tage of the privileges offered you by your national Church, no restraint of any sort or kind can be placed on you. Those privileges, however, are always open to you. Provided that you have been baptised, baptised by one of your own ministers, or even by a layman, the adminis- tration of .the Sacrament cannot be denied to you, save for causes which equally apply to a conforming Church- man. You have, moreover, a legal right to baptism in the church (if unbaptised), to a seat in the church, to marriage in the church, to burial in the churchyard, of your parish. You may be, and in case of necessity through other fit persons failing you must be, the churchwarden of your parish church; and• you have other duties to the national Church, such as the payment of' tithes. It is true that you will lose some of your privileges by your refusal to conform to the discipline of the Church. You will, for instance, be unable to take advantage of charities reserved for conforming members of the Church, and in some cases will be excluded from the manage- ment of such charities. •But all these privileges are open to you if and when you choose to revive the rights that you yourself have suspended.' On the other hand, the Church before the days of toleration refused to recognise Dissent at all. It tried to compel Dissenters to come in. It failed, and thereby created a Dissenting class; but its failure in no sense altered the national character of the Church of England. We therefore urge the point that the laity of the Church of England includes all baptised Englishmen and Englishwomen. We would not admit for one moment that the "right ideal determination of actual Church membership" should be found in the fact of Confirma- tion. To do so would constitute an exclusiveness which would, in view of the fact that the Church in its social efforts has as yet made comparatively slight inroads on the almost invincible ignorance of a vast mass of the popu- lation, make the Church a narrow sect. It would not only exclude "a large number of professed Churchmen" and all Dissenters, but would also exclude millions of the indeter- minate poor. Confirmation is not necessary to complete the status of a Christian. Confirmation and communication are ideals of practice, not of definition. The laity of the Church, as we have said above, includes all baptised persons. But then it will be asked,—' Do you definitely propose that this shall be the only test for determining, first, the ranehise that shall elect the representatives of the laity to any Church Council or other body to be hereafter estab- lished; and secondly, the class that shall form the repro- sentatives ? If this is your proposal, it means that you would allow persons openly inimical to the existence of the Church to elect representatives to the Council, and even to be elected as such representatives. Such a, proposal is subversive of all order and government, and would effec- trually tie the hands of any body of lay representatives.' We might reply to this that the presence in the House of Commons of men who openly declare their hatred of the British Empire has hardly injured the Empire and has served various useful purposes. But this reply would be purely polemical and beside the point. We do not propose that baptism shall be the only test. As we have said those who do not wish to conform to the usages of the Church of England inevitably and voluntarily lose certain of their privileges. The son who prefers not to return to hie, father's house, from which in former years he has been wrongfully expelled, and to which he has been invited to return, loses, if he does not return, some at least of the advantages of sonship. So the Nonconformist must in this case lose certain privileges. Our proposal is that every person of full age who has been baptised, and who is prepared to declare in writing that he (or she) is a bond-fide member of the Church. of England, shall. be qualified to elect to, and for election to, any body representing the lay-element in the Church. The exclusion of those who will not make, or through ignorance have not made, this declaration would in no way render any Council an unrepresentative body. The House of Commons represents the nation, despite the fact that there are great numbers of persons who in no way are represented.. We, however, hold that the franchise should be made. as wide as possible,—wide enough, in fact, to include • all who are, all who' believe they are, and all who wish to become conforming members of the Church of England.. In practice the franchise would in the majority of cases only be exercise& by men and women who had been con- firmed and were communicants, so that those who insist on the narrower franchise would in fact be satisfied. But legally to narrow the basis, of representation would, in our opinion, deal a fatal blow to the national status of the Church.