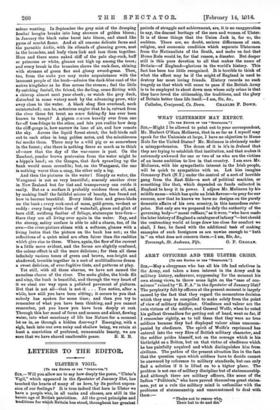 WHAT ULSTERMEN MAY EXPECT.

[To ass EDITOR 01 TSB ..81[STASOS."1 Snz,—Might I be allowed to point out to your correspondent, Mr. Herbert O'Hara. Molineux, that in so far as I myself may speak for the Unionists at large, I have no objection to Home Rule for the United States? Mr. Molineux is obviously under a misapprehension. The deuce of it is it's in Ireland that they are trying to establish that institution, and that makes it extremely awkward for one or two of us who are the victims of an inane ambition to live in that country. I am sure Mr. Molineux, with his sympathetic interest in the Irish people, will be quick to sympathize with us. Let him imagine Gramercy Park (N.Y.) under the control of a sort of horrible gang from the East Side—a sort of political machine, or something like that, which depended on funds collected in England to keep it in power. I adjure Mr. Molineux by his middle name—which has quite an Irish flavour—to pray for our success, now that he knows we have no designs on the purely domestic affairs of his own country, in this hazardous enter- prise. Not only are we prepared to defy the authority of the governing body—" moral ruffians," as it were," who have made the later history of England a catalogueof infamy"—but should the contracting world at large draw too close for comfort we shall, I fear, be faced with the additional task of making examples of such foreigners as are unwise enough to " butt in " on what does not concern them.—I am, Sir, 8to.,