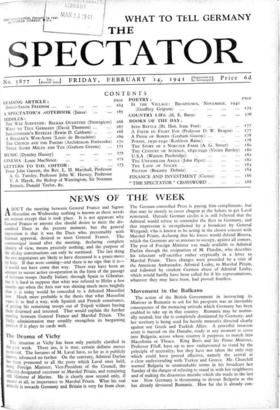 The Drama of Vichy

The situation at Vichy has been only partially clarified in the past week. There are, it is true, certain definite moves to record. The fortunes of M. Laval have, so far as is publicly known, advanced no farther. On the contrary, Admiral Darlan has been promoted to all the posts which Laval once held, being Foreign Minister, Vice-President of the Council, the officially-designated successor to Marshal Petain, and remaining still Minister of Marine. He is clearly now second only, if second at all, in importance to Marshal Petain. What his real attitude is towards Germany and Britain is very far from clear. The German-controlled Press is paying him compliments, but that may be merely to cover chagrin at the failure to get Laval reinstated. Outside German circles it is still believed that the Admiral would refuse to surrender the fleet to Germany, and that impression is strengthened by a broadcast by General Weygand, who is known to be acting in the closest concert with Marshal Main, declaring that his forces would defend Bizerta, which the Germans are so anxious to occupy, against all corners. The post of Foreign Minister was made available to Admiral Darlan through the resignation of M Flandin, who describes his reluctant self-sacrifice rather cryptically in a letter to Marshal Petain. These changes were preceded by a visit of the American Ambassador, Admiral Leahy, to Marshal Petain, and followed by virulent German abuse of Admiral Leahy, which would hardly have been called for if his representations, whatever they may have been, had proved fruitless.