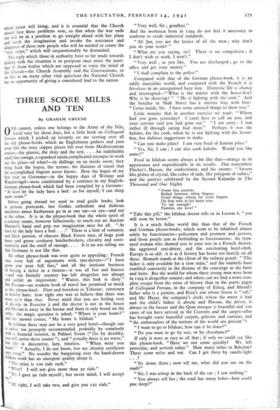 NE cannot, unless one belongs to the Army of the Nile, travel very far these days, but a little book on Colloquial Persian which I picked up recently set me turning over all the old phrase-books which an Englishman gathers and puts away like the stray copper pieces left over from Mediterranean cruises—the piastre, the zloty and the reit. . . . An indefinable smell like sewage, a squashed raisin, complicated attempts to work out the price—of what?—in shillings on an inside cover, they bring back the hopes, the terrors, the illusions of travel that the accomplished linguist never knows. How the hopes of my first visit to Germany—in the happy days of Weimar and Wandervogel—were conditioned by a sentence in my English- German phrase-book which had been compiled by a German: " At least let the lady have a bed: as for myself, I can sleep upon straw."

Before going abroad we used to read guide books, look at picture postcards, but Gothic cathedrals and dubious anecdotes about Barbarossa go in at one ear—or eye—and out at the other. It is in the phrase-book that the whole spirit of a country seems, however fallaciously, to reach out an Ancient Mariner's hand and grip our imagination once for all. " At least let the lady have a bed. . . ." There is a hint of romantic and illicit passion, of obscure Black Forest inns, of large pink knees and green corduroy knickerbockers, chivalry and senti- mentality and the smell of sausage. . . . It is no use telling me that Germany is not like that.

No other phrase-book was ever quite so appealing : French ones were full of arguments with taxi-drivers—" I have given you your full fare," and all the intricate business of buying a ticket in a theatre—it was all fun and finance —and one friendly country has left altogether too abrupt and unfair an impression: " Waiter, this fork is dirty." But Persian—no modem book of travel has promised so much as this phrase-book. Dust and boredom in Teheran: statesmen in bowler hats: how right one was to believe that there was more to it than that. Never mind that you are feeling very ill already in Exercise 2 and the doctor is not in the house and Hassan is away in the bazaar and there is only bread on the table: the magic question is asked, " Where is your home?" and the answer comes, " My home is Isfahan."

In Isfahan there may not be a very good hotel—though one is rather too promptly recommended, probably by somebody with a financial interest, in Pahlavi Street (" Go by droshky, you will arrive there sooner "), and " actually there is no water," but life is decorative, lazy, timeless. " When were you barn? " Actually, I do not know, but my identity certificate says 1294." No wonder the bargaining over the hand-drawn Isfahan work has an unurgent quality about it. " The price is too rials each."

And the workmen born in 1294 do not feel it necessary to conform to crude industrial standards.

" Very well ; as you like. You are discharged ; go to the office and get your money."

" I shall complain to the police."

Compared with that of the German phrase-book, it is an oddly masculine world, and compared with the French it is frivolous in an unorganised hazy way. Domestic life is chancy and interrupted—" What is the matter with the house-boy? Why is he shouting? " " He is fighting with the cook." And the butcher in Shah Street has a sinister way with him : " Come inside, Sir. I have some unusual things to show you."

Little wonder that in another exercise we read : " Where had you gone yesterday? I came here to call on you, and your servant said you had gone out." " I am sorry ; I was rather ill through eating bad meat." Perhaps it was the kabobs, for the cook, when he is not fighting with the house- boy, has dubious suggestions to make.

" Can you make pilau? I am very fond of Iranian pilau."

Food in Isfahan seems always a bit like that—strange in its appearance and unpredictable in its results. One remembers Flecker's Hassan, the confectioner, and his sweets: " Sweets like globes of crystal, like cubes of jade, like polygons of rubies," and the pastries celebrated by the Second Kalandar in The Thousand and One Nights

" Sweet fine pastries Rolled between white fingers, Fried things whose fat scent lingers On him who in his haste tries To eat enough!

" Take this pill," the Isfahan doctor tells us in Lesson 6, " you will soon be better."

It is a much fuller world this than that of the French and German phrase-books, which seem to be inhabited almost solely by functionaries—policemen and postmen and porters, and those people just as forbidding as functionaries: the lynx- eyed woman who showed you to your seat in a French theatre, the aggrieved taxi-driver, and the unrelenting hotel-clerk. Europe is so old: it is as if history has borne too heavily on all these. Bismark stands at the elbow of the railway guard : " This ticket is only available for a slow train," and the tumbrils have rumbled constantly in the dreams of the concierge as she knits and knits. But the world for whom these young men were born in 1294 is altogether sunnier, and where can we find a more com- plete escape from the ruins of history than in the poetic pages of Colloquial Persian, in the company of Eshaq, and Ahmid's father who is a painter, and Reza's son whose house is " tall," and Mr. Hazar, the company's clerk; where the water is bad and the child's father is absent and Hassan, the driver, is always in the bazaar and the Qum mosque is beautiful and too cases of tea have arrived in the Customs and the carpet-seller has brought some beautiful carpets, geleems and curtains, and " the ambassadors of the nations of the world are present "?

If only it were as easy as all that ; if only we could say like this phrase-book, " Have we not come quickly? We left yesterday, and arrived today." How many miles to Babylon? Three score miles and ten. Can I get there by candle-light .?

" You always tell lies ; the road has many holes—how could you sleep?"