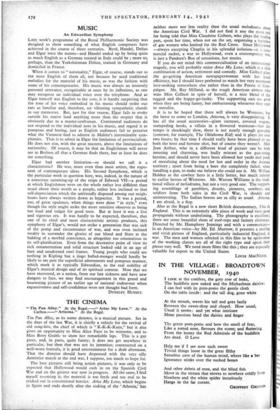 LAST. week's programme of the Royal Philharmonic Society was designed to show something of what English composers have achieved in the course of three centuries. Byrd, Handel, Delius and Elgar were the names—and Handel ended up by being quite as much English as a German trained in Italy could be ; more so, perhaps, than the Yorkshireman Delius, trained in Germany and domiciled in France.

When it comes to " nationality," Elgar, of course, stands out as the most English of them all, not because he used traditional melodies for the material of his music, as was the fashion with some of his contemporaries. His music was always an intensely personal utterance, recognisable at once by its inflexions, as one may recognise an individual voice over the telephone. And as Elgar himself was English to the core, it is hardly surprising that the tone of his voice embodied in his music should strike our ears as familiar and, therefore, set vibrating sympathetic chords in our memories. But, just for that reason, Elgar fails to evoke outside his native land anything more than the respect that is obviously due to a master-craftsman. Continental audiences do not respond to the individual note in his music, and regard it as pompous and boring, just as English audiences fail to perceive what the Viennese find to admire in Mahler's interminable sym- phonies. That is to admit in Elgar the limitation of provincialism. He does not rise, with the great masters, above the limitations of nationality. Of course, it may be that an Englishman will never see in Brahms all that a German finds there, but at least he does see something.

Elgar had another limitation—or should we call it a characteristic? He was, more even than most artists, the expo- nent of contemporary ideas. His Second Symphony, which is the particular work in question here, was, indeed, in the nature of a conscious summing-up of the reign of Edward VII—a period at which Englishmen were on the whole rather less diffident than usual about their worth as a people, rather less inclined to that self-depreciation which the unfriendly disposed among our neigh- bours have always written down as hypocrisy. It was a period, too, of great opulence, when things were done " in style," even though the style might strike the more sensitive observer as being too loud and vulgar for good taste. But at least it was a live and vigorous era. It was hardly to be expected, therefore, that one of its chief and most characteristic artistic products, this symphony of Elgar's, would not strike a generation that was sick of the pomp and circumstance of war, and was even inclined weakly to surrcnder the glories of our blood and State at the bidding of a morbid conscience, as altogether too ostentatious in its self-glorification. Even from the decorative point of view its rich ornamentation and solid structure looked odd in an age of bare and unadorned steel frames. Young people who could see nothing in Kipling but a jingo ballad-monger would hardly be likely to see past the superficial adornments and pompous manner, which mark it as typically Edwardian, to the real nobility of Elgar's musical design and of its spiritual content. Now that we have recovered, as a nation, from our late sickness and have new dangers to face, we may find encouragement in this grand and heartening picture of an earlier age of national endeavour when expansiveness and self-confidence were not thought bad form.