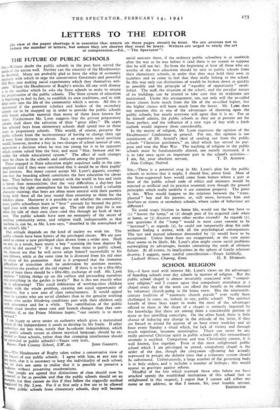 SrR,—I have read with interest Mr. Lyon's views on the advantages of boarding schools over day schools in matters of religion. But the public school chapel is ahnost invariably associated with " compul- sory religion," and I cannot agree that compulsory attendance at a chapel every day of the week can afford the benefit to be obtained by voluntary church-going in the home town. Has the nineteenth- century tradition of " automatic church parade " ever really been challenged in some, or, indeed, in any, public school? The spiritual benefit of those boys eager to make the most of the advantages offered to them in the shape of a chapel is seriously impaired by the knowledge that there are among them a considerable portion of more or less unwilling conscripts. On the other hand, there is little chance of inducing any change in the attitude of the latter, if they are forced to attend for quarter of an hour every weekday and an hour every Sunday a ritual which, for lack of variety and through much repetition, becomes meaningless. There can never be any really universal Christian spirit in public schools till this extraordinary anomaly is rectified. Compulsion and true Christianity cannot, it is well known, live together. Even at this most enlightened public school which I am privileged to attend, compulsory chapel is the order of the day, though the clergyman officiating has actually expressed in private the definite view that a voluntary system should be substituted. Unfortunately, a large number of the governing body is in holy orders, and it includes a number of bishops ; this would appear to gravitate against reform.

Mindful of the fate which overtook those who before me have attacked openly the established institutions of this school (not so enlightened in this respect), I regret that I cannot add either my name or my address, so that I remain, Sir, your humble servant,