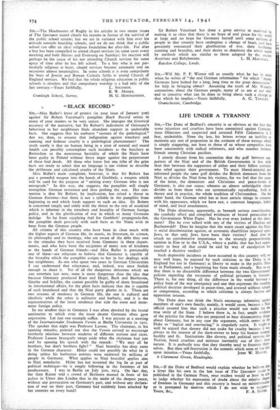 Page 14, 14 February 1941 — Sm,—If the Duke of Bedford would explain whether he believes
Close

Sm,—If the Duke of Bedford would explain whether he believes

the a letter like his own in the last issue of The Spectator could be published in the German Press, your readers would at least be able to judge whether his expression of doubt about the relative degfee of freedom in Germany and this country is based on nisinformancti or is prompted by motives which I do not wish to suggest--