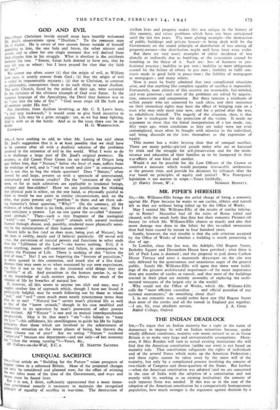 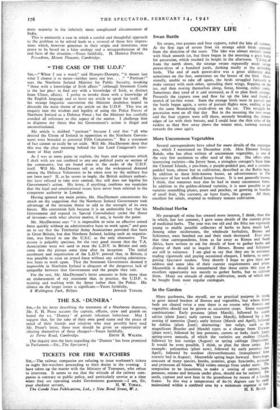 Page 15, 14 February 1941 — THE INDIAN DEADLOCK Sgt,—To argue that an Indian majority has
Close

THE INDIAN DEADLOCK Sgt,—To argue that an Indian majority has

a right in the name of democracy to impose its will on Indian minorities because, under wholly different conditions, majority rule seems natural to us in Great Britain is to make very large and unwarrantable assumptions. More- over, if Miss Royden will turn to actual existing institutions she will find that the American constitution (unlike our own) is not based on majority rule. That constitution safeguards the rights of individuals and of the several States which make up the American Federation ; and these rights cannot be taken away by the mere will of the majority, but only by a complicated process involving the consent of two-thirds of Congress and three-quarters of the States. But further —when the American constitution was adopted (and we are concerned in the case of India with the adoption of a constitution and not merely with its working as an existing institution) the consent of each separate State was needed. If this was so in the case of the adoption of the American constitution by a comparatively homogeneous population, how much stronger is the argument against decision by a

mere majority in the infinitely more complicated circumstances of India.

This is eminently a case in which a careful and thoughtful approach to the problem to be solved leads to a reversal of those first impres- sions which, however generous in their origin and intentions, may prove to be based on a false analogy and a misapprehension of the real facts of the situation.—Yours faithfully, H. HAROLD PORTER.