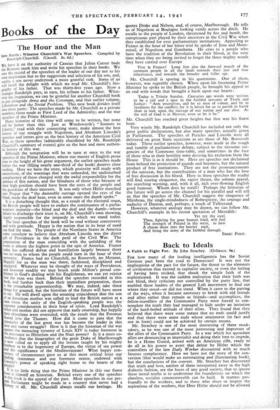 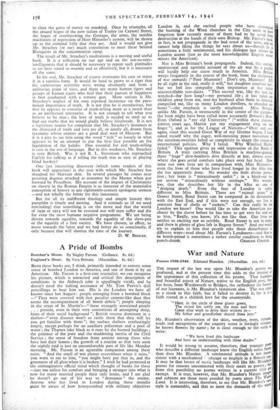 A Faith to Fight For. By John Strachey. (Gollancz. 6..) FOR how many of the leading intelligentsia has the Soviet German pact been the road to Damascus? It was not the implications of the pact for the future, the threat to the elements of civilisation that existed in capitalist society, or even the feeling of having been tricked, that shook the simple faith of the sophisticated. It was the sudden realisation that their faith was not blind, their criticism not controlled by the party line, that enabled these leaders of the general Left movement to find out where they stood—or did not stand. When it came to the parting of the ways, when it became necessary to break with old friends and allies ;ather than remain as friends—and accomplices, the fellow-travellers of the Communist Party were forced to con- template the truth they had managed to hide under an imitation of the hard-boiled attitude of their allies. They found that they believed that there were some means that no ends could justify and that there were some ends whose attainment (in fact and not in form) could not be achieved by certain means.

Mr. Strachey is one of the most interesting of these stock- takers, as he was one of the most interesting and important of the allies of the Communist Party. In a war which his quondam allies are denouncing as imperialist and doing their best to impede, he is a Home Guard, armed with an American rifle, ready to do all in his power to avert that defeat by Hitler which the controllers of the late Daily Worker discounted with so much fatuous complacency. Here we have not the story of the con- version (that would make an entertaining and illuminating book), but the conclusions of the. convert. Mr. Strachey has discovered that truth and love, neither of them interpreted away in the high dialectic fashion, are the bases of any good society, that to ignore these moral truths is to undermine the foundations on which the classless, socialist commonwealth can be built. It matters pro- foundly to the workers, and to those who share or inspire the aspirations of the workers, that Herr Hitler should not be allowed

to close the gates of mercy on mankind. Once he triumphs, all the absurd hopes of the new tailors of Tooley (or Cayton) Street, the hopes of overthrowing the Gestapo, the army, the terrible machinery of repression of Herr Himmler's system, will be shown up as the criminal folly that they are. And it would not give Mr. Strachey (or me) much consolation to meet these belated Blanquists in the concentration camp.

The result of Mr. Strachey's meditations is a moving and useful book. It is a reflection on our age and on the not-so-very- intelligentsia that it should be necessary to repeat such platitudes as are here stated so warmly and so effectively, but it is necessary all the same.

In his zeal, Mr. Strachey of course overstates his case or states it in a careless form. It would be hard to prove to a tiger that his carnivorous activities were wrong absolutely and from a utilitarian point of view, and there are many human tigers and groups of human tigers who find that their pursuit of happiness is best conducted with a tommy gun. More serious is Mr. Strachey's neglect of his own repeated insistence on the para- mdunt importance of truth. It is not that he is mendacious, but that he appears to conceive of truth-telling more as a moral than as an intellectual enterprise. It is not enough to tell what you believe to be true ; the love of truth is needed to steel us to find out truths that we would gladly believe falsehoods. It is not a legitimate matter for complaint that Mr. Strachey's instances of the disregard of truth and love are all, or nearly all, drawn from tyrannies whose centres are a good deal west of Moscow. But it is a pity to see him using the word " rich " so loosely in what appears to be an attempt to put the best face possible on the liquidation of the kulaks. One essential for real truth-telling is care in the use of language. But in this weakness, Mr. Strachey is very British. Was it not R. L. Stevenson who reproached Carlyle for talking as if telling the truth was as easy as playing blind hookey?

One last interesting discovery (which some readers of this book will appreciate) is the ease with which Mr. Strachey has sloughed his Marxian skin. In several passages he comes near asserting dogmas attacked as nonsense by the Master when put forward by Proudhon. His account of the impact of Christianity on slavery in the Roman Empire is as innocent of the materialist conception of history as any eighteenth-century apologetic sermon —and not wholly the better for this innocence.

But for all its indifferent theology and simple history this pamphlet is timely and moving. And it reminds us (if we need reminding) that something is on the move and that the world of 1939 or 1914 will not be restored nor will men suffer and die for even the most humane negative programme. We are being driven towards equality, towards the equality of the slave-pen or the equality of a free society. We have chosen, in effect, to move towards the latter and we had better do so consciously, if only because that will shorten the time of the journey.