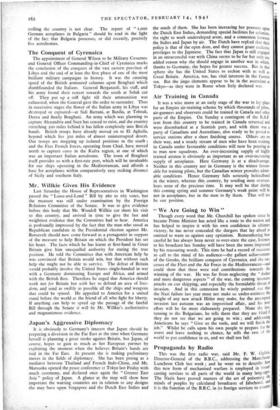 It was a wise move at an early stage of the war to lay plans for an Empire air-training scheme by which thousands of pilots, air-gunners and observers could be trained in Canada and other parts of the Empire. On Sunday a contingent of the R.A.F. sent from this country to be trained in Canada returned and were disembarked at a Scottish port, and with them was a party of Canadians and Australians, also ready to be posted to service stations after a short finishing course. Others are on their way, and a steady stream of men who have been training in Canada under favourable conditions will now be pouring in to man new squadrons. An ever-increasing supply of highly trained airmen is obviously as important as an ever-increasing supply of aeroplanes. Here Germany is at a disadvantage. Neither in this country nor in Germany is the winter favour- able for training pilots, but the Canadian winter provides admir- able conditions. Hence Germany falls seriously behindhand in the winter, whereas this country, by sending men overseas, loses none of the precious time. It may well be that during this coming spring and summer Germany's weak point will be not in aeroplanes, but in the men to fly them. That will not be our position.