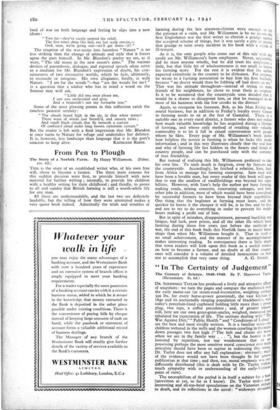 From Pen to Plough

Tins is the story of an established writer who, of his own free will, chose to become a farmer. The three main reasons for this sudden decision were first, to provide himself with new material for further writing ; secondly, to provide his children with a healthy setting for their childhood ; and thirdly, to prove to all and sundry that British farming is still a worth-while life for any man.

All three are understandable, and the last two are definitely laudable, but the telling of how they were attempted makes a very queer book indeed. Admittedly the trials and troubles of

farming during the late nineteen-thirties were enough to try the patience of a saint, and Mr. Williamson is by no means the first Englishman nor the first writer to cherish a grudge against the accepted scheme of things, but it was surely a pity to permit that grudge to taint every incident in his book with a streak of ill-temper.

As it is, the only people who come out of this tale with any credit are Mr. Williamson's farm employees.' Never, apparently, did he trust anyone wholly, but he did trust his employees little, but that little bit of wholesomeness is too small to leaven his farming story. For the rest it is evident that the author expected everybody in the country to be dishonest. For instance, he wrote to a farming association to buy him his first bullocks, because " no dealer would then be fobbing off bad doers on me." That was his attitude throughout—instead of trying to make friends" of his neighbours, he chose to treat them as suspects. Is it to be wondered that the countryside soon decided that it would be a shame to disappoint him, or that he managed to do most of his business with the few crooks in .the district?

Again, to recognise his foreman, Bob, as his Man Friday was sound business, but in addition to Friday's loyalty every Crusoe to farming needs, to sit at the feet of Gamaliel. There is a suitable one in every rural district, a farmer who does not realise how much valuable knowledge he has acquired during a lifetime of farming, and whose only. method of retailing Ellis valuable commodity is to let it fall in casual conversation with people whom he likes. Every page of Mr. Williamson's book shows how helpless the novice at farming is when he lacks this inside information ; and in this way illustrates clearly that the real bow and why of farming life lies hidden in the hearts and heads of country people, and can be purchased only with the currency of true friendship.

But instead of realising this Mr. Williamson preferred to take his own line. To such much is forgiven, even by farmers and the countryside. Accordingly, he fetched a relation, Sam, back from Africa to manage his farming enterprise. Sam may well have been a lovable man, but every reader of this book will agree that to run the smallest of smallholdings was beyond his capa- bilities. However, with Sam's help the author got busy farming, making roads, mixing concrete, renovating cottages, and forty other jobs in addition, most of which would have been considered by successful farmers to have been beyond their capabilities. One thing that the beginner at farming must learn, and the quicker he learns it the cheaper it will be, is to live and let live, and not to try to do everything in order to prevent his neigh- bours making a profit out of him.

But in spite of mistakes, disappointment, personal hardship and fatigue, bad luck, poor prices, and all the other ills which beset farming during those few years just before the outbreak of war, the end of this book finds this Norfolk farm in much better shape than when Mr. Williamson bought it. That in itself is no small achievement, and the manner of its accomplishment makes interesting reading. In consequence there as little doubt that town readers will look upon this book as a useful treatise on how to become a farmer, and no doubt at all that country ones will consider it a volume of detailed instructions on how

not to accomplish that very same thing. A. G. STREET.