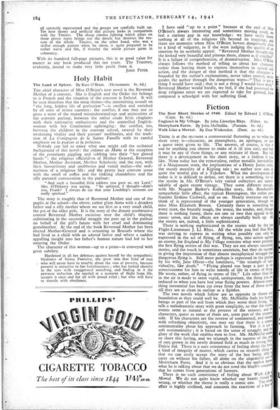 The Land of Spices. By Kate O'Brien. (Heinemann. 8s. 6c1.) THE chief character of Miss O'Brien's new novel is the Reverend Mother of a convent. She is English and the Order she belongs to is French and the situation of the convent is Ireland. It will be seen therefore that the main theme—the unremitting assault on " the long, hidden life of perfection "—is swollen and enriched by all sorts of minor currents : the conffict, if one may use so gross a term of the muted misunderstandings and animosities of the convent parlour, between the rather crude Irish chaplains with their nationalist enthusiasms and the controlled English- woman with her Continental upbringing : the conflict, too, between the children in the convent school, swayed by their awakening vitality and their parents' snobberies, and the tradi- tion of La Compagnie de la Sainte Famille with its careful emphasis on la pudeur et la politesse.

Nobody can fail to enjoy what one might call the technical background of this novel : the enfants de Marie at the reception of the postulants giggling and sobbing into their " hot gloved hands ": the religious officialdom of Mother General, Reverend Mother, Mother Assistant, Mother Scholastic and the rest, with their favouritisms and snobberies and venial malice—the ordi- nariness of a religious life : and the pretty lacy convent scene with the smell of coffee and the tinkling chandeliers and the silly parental conversation in the parlour :

" And such a beautiful little address you gave us, my Lord," Mrs. O'Doherty was saying. " So spiritual, I thought—didn't you, Frank? I always do say that your Lordship's sermons are really spiritual."

The story is roughly that of Reverend Mother and one of the pupils at the school—the clever, rather plain Anna with a drunken father and a silly mother whom we see first as a very small child, the pet of the older girls. It is the story of the distant unobtrusive control Reverend Mother exercises over the child's shaping, culminating in the successful struggle she puts up in the parlour on behalf of the girl's future with her cruel and dominating grandmother. At the end of the book Reverend Mother has been elected Mother-General and is returning to Brussels where she had lived as a child with an adored father and where a sudden appalling insight into her father's human nature had led to her entering the Order.

The character of this woman—up to a point—is conveyed with great subtlety.

Hardened in all her defences against herself by the sympathetic bleakness of Sainte Fontaine, she grew into that kind of nun who will never- have to trouble about the vow of poverty, because poverty is attractive to her fastidiousness ; who has looked chastity in the eyes with exaggerated searching, and finding in it the perverse seduction she needed at a moment of flight from life, accepts it once and for all with proud relief ; but who will have to wrestle with obedience. I have said ".up to a point " because at the end of Miss O'Brien's always interesting and sometimes moving novel, we feel a curious gap in our knowledge : we have really learnt nothing at all of the religious life beyond its trappings, and there are moments when Miss O'Brien. hovers dangerously dose to a kind of vulgarity, as if she were judging the quality of an emotion by its aesthetic appeal. " Reverend Mother thought that she looked very beautiful and piteous there, almost as if crucified?, It is a failure of comprehension, of dramatisation. Miss O'Brien always follows the method of telling us about her characters rather than leaving them to express themselves in speech and action, and the danger of that method is that the character is bounded by the author's explanations, never takes control, never guides the author through the dangerous ways—" That is not a thing I would have said ; that is not a thing I would have done.' Reverend Mother would hardly, we feel, if she had possessed the deep religious sense we are expected to take for granted, have compared a schoolgirl with her suffering God.