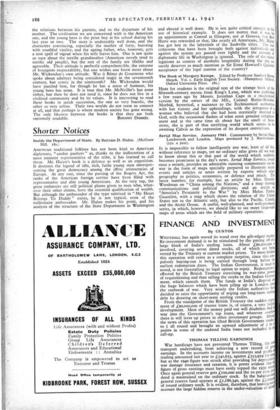 Inside the Department of State. By Bertram D. Hulen. (McGraw Hill. r8s.) AMERICAN traditional folklore has not been kind to American diplomats, " cookie pushers " as, thanks to the indiscretion of a most eminent representative of the tribe, it has learned to call them. Mr. Huien's book is a defence as well as an exposition. It destroys the legend of idle, rich, futile young men misrepre- senting the great democracy among the effete aristocracies of Europe. At any rate, since the passing of the Rogers Act, the ranks of the American foreign service have been filled with representative and able young Americans. At the very top, the great embassies are still political plums given to men who, what- ever their other claims, have the essential qualification of wealth. But although the ambassador of the type satirised in " My Heart Belongs To Daddy " exists, he is not typical, even of the millionaire ambassador. Mr. Hulen makes his point, and his analysis of the structure of the State Department in Washington

and abroad is well done. He is not quite critical enout,h in his use of historical example. It does not matter that it was In an appointment as Consul at Glasgow, not at Geneva, that Brit Harte was rewarded or that, like nearly all Americans, Mr. }um has got lost in the labyrinth of the Sackville titles. The real criticisms that have been brought both against individuals and against the system are passed over lightly and the comedy ci diplomatic life in Washington is ignored. The role of the minor legations as centres of alcoholic hospitality during the dry en surely deserves as much mention as Sir Esme Howard's Quixotic acceptance of the legal custom of the country?