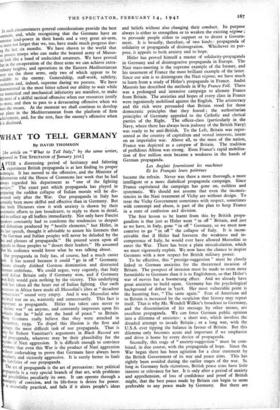 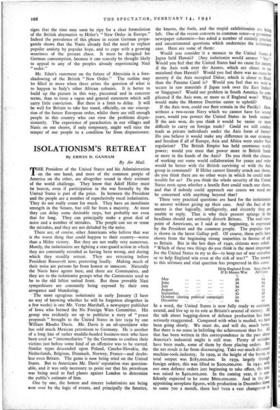 WHAT TO TELL GERMANY

[An article on "What to Tell Italy," by the same writer, ppeared in THE SPECTATOR of 7anuary 31st.] FTER a distressing period of hesitancy and faltering experiment British propaganda is at last finding its proper echnique. It has moved to the offensive, and the Minister of ormation told the House of Commons last week that he had ways regarded his department as " one of the fighting rvices." The exact part which propaganda has played in reparing the sudden collapse of Italian morale will be dis- overed only after the War. Our propaganda in Italy has mainly been more skilful and effective than in Germany. But at both Dictators view it with anxiety is shown by their ystematic efforts to jam broadcastS, to reply to them in detail, d to collect up all leaflets immediately. Not only have Fascist peakers constantly had to condemn the tendencies to despair nd defeatism produced by " hostile elements," but Hitler, in is last speech, thought it advisable to assure his listeners that the German and Italian peoples will never be deluded by the s and phrases of propaganda." He poured scorn upon all ppeals to these peoples to " desert their leaders." He assumed t his audience would know what he was talking about.

Our propaganda in Italy has, of course, had a much easier sk. It has scored because it could " go in off " Germany. talians already disliked German domination and distrusted rman ambitions. We could argue, very cogently, that Italy ould defeat Britain only if Germany won, and if Germany on Italy would gain nothing by the victory. This underlying th has taken all the heart out of Italian fighting. Our swift accesses in Africa have made all Mussolini's jibes at " decadent emocracies " sound very empty. And it was Mussolini who eclared war on us, wantonly and unnecessarily. This fact is .portant as propaganda. Hitler has taken care never to declare war " on anyone, and constantly impresses upon his objects that he " held out the hand of peace " to Britain. tang Germans really believe that they were attacked in eptember, 1939. To dispel this illusion is the first and -rhaps the most difficult task of our propaganda. That is by Sir Robert Vansittart's arguments in Black Record are ad propaganda, whatever may be their plausibility for the ctims of Nazi aggression. It is difficult enough to convince ermans that even this War is the product of Nazi aggression ithout undertaking to prove that Germans have always been liarly and viciously aggressive. It is surely better to limit liabilities of our propaganda. The art of propaganda is the art of persuasion: but political ropaganda is a very special branch of that art, with problems d Possibilities peculiarly its own. It can operate through a 'floPoly of coercion, and its life-force is desire for power. is essentially practical, and fails if it alters people's ideas and beliefs without also changing their conduct. Its purpose always is either to strengthen or to weaken the existing regime ; to persuade people either to support or to desert a Govern- ment. It is broadly, therefore, of two kinds : propaganda of solidarity or propaganda of disintegration. Whichever its pur- pose, it appeals to both anxiety and to hope.

Hider has proved himself a master of solidarity-propaganda in Germany and of disintegrative propaganda in Europe. The Nazi mass-meeting is the supreme example of the former, and his treatment of France the most brilliant example of the latter. Since our aim is to disintegrate the Nazi regime, we have much to learn from a study of Hitler's propaganda in France. Andre Maurois has described the methods in Why France Fell. There was a prolonged and intensive campaign to alienate France from Britain. The anxieties and hopes of every class in France were ingeniously mobilised against the English. The aristocracy and the rich were persuaded that Britain stood for those democratic principles that they feared ; the authoritarian principles of Germany appealed to the Catholic and clerical parties of the Right. The officer-class (particularly in the Navy, where there has always been jealousy of the British Navy) was ready to be anti-British. To the Left, Britain was repre- sented as the country of capitalism and vested interests, intent on an imperialist war. Above all, to the mass of the nation, France was depicted as a catspaw of Britain. The tradition of perfidious Albion was strong. Even France's rapid mobilisa- tion of five million men became a weakness in the hands of German propaganda.

Les Anglais fournissent les machines Et les Francais leurs poitrines became the refrain. Never was there a more thorough, a more intelligent or a more diabolical propaganda campaign. Since France capitulated the campaign has gone on, ruthless and systematic. We should not assume that even the inconsis- tencies in the Nazi treatment of Vichy are without design. To treat the Vichy Government sometimes with respect, sometimes with contempt and abuse, is part of the plan to keep France in a state of confusion and division.

The first lesson to be learnt from this by British propa- gandists is that just as Hitler went " in off " Britain, and just as we have, in Italy, gone " in off " Germany, so we must now contrive to go " in off " the collapse of Italy. It is incon- ceivable that if Hider had foreseen the weakness and in- competence of Italy, he would ever have allowed Mussolini to enter the War. There has been a plain miscalculation, which we must vigorously exploit. We now have the chance to inspire Germans with a new respect for British military power.

To be effective, this " prestige-suggestion " must be closely linked to German anxieties for the threatened invasion of Britain. The prospect of invasion must be made to seem more formidable to Germans than it is to Englishmen, so that Hitler's war of nerves has a boomerang effect. And we already have great anxieties to build upon. Germany has the psychological background of defeat in '1918. Her most vulnerable point is the haunting fear, " The same again." Fear of American aid to Britain is increased by the suspicion that history may repeat itself. That is why Mr. Wendell Willkie's broadcast to Germany, and the dissemination of his message by other means, are excellent propaganda. We can force German public opinion into a dilemma of anxieties : a short war, which involves the dreaded attempt to invade Britain ; or a long war, with the U.S.A. ever tipping the balance in favour of Britain. But this dilemma only becomes acute and important if we emphasise and drive it home by every device of propaganda.

Secondly, this stage of " anxiety-suggestion " must be com- bined, in due course, with the propaganda of hope. Since the War began there has been agitation for a clear statement by the British Government of its war and peace aims. This has rightly been avoided during the earlier stages of the war. Sc long as Germany feels victorious, British peace aims have little interest or relevance for her. It is only after a period of anxiety and apprehension, of loss of confidence and proof of British might, that the best peace made by Britain can begin to seem preferable to any peace made by Germany. But there are signs that the time may soon be ripe for a clear formulation of the British alternative to Hitler's " New Order in Europe." Indeed the prevalence of this phrase in recent German propa- ganda shows that the Nazis already feel the need to replace popular anxiety by popular hope, and to cope with a growing weariness of the present chaos. It must be designed for German consumption, because it can scarcely be thought likely to appeal to any of the peoples already experiencing Nazi " order."

Mr. Eden's statement on the future of Abyssinia is a fore- shadowing of the British " New Order." The outline may be filled in more when there arises the question of what is to happen to Italy's other African colonies. It is better to build up the picture in this way, piecemeal and in concrete terms, than to issue a vague and general statement which will carry little conviction. But there is a limit to delay. It will be well for Britain to take her stand, officially, on our concep- tion of the future European order, whilst there are still enough people in this country who can view the problems dispas- sionately. The experience of parachutists in our villages and Nazis on our shores, if only temporary, might well raise the temper of our people to a condition far from dispassionate.