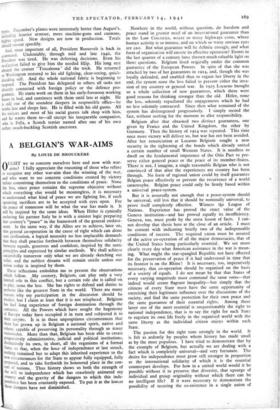 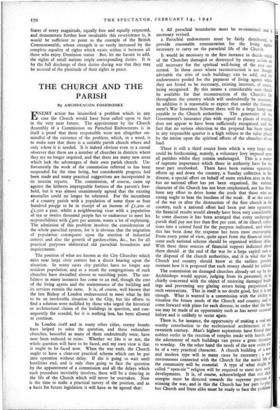 By LOUIS DE BROUCKERE OUGHT we to concern ourselves here and now with war- aims? I fully appreciate the reasoning of those who refuse to recognise any other war-aim than the winning of the war, and who want to see concrete conditions created by victory before committing themselves to the conditions of peace. None the less, since peace remains the supreme objective without which everything else would be meaningless, it is necessary to understand what kind of peace we are fighting for, if such agonising sacrifices are to be accepted with eyes open. For the peace of tomorrow will be what the war has made it. It will be inspired by the same ideas. When Hitler is cynically enslaving his parmer Italy he is with a sinister logic preparing that country's "peace" in the framework of the general enslave- ment. In the same way, if the Allies are to achieve, later on, that general co-operation in the cause of right which can alone save civilisation, a logical necessity no less implacable demands that they shall practise forthwith between themselves solidarity between equals, generous and confident, inspired by the same principles and expressed by similar methods. We shall achieve successfully tomorrow only what we are already sketching out today, and the noblest dreams will remain sterile unless our action today is inspired by them.

These reflections embolden me to present the observations which follow. this country, Belgium, can play only a very limited role in this conflict, but a certain role she is called on to play, none the less. She has rights to defend and duties to perform like the greatest State in the world. There are many reasons why my participation in the discussion should be modest, but I claim at least that it is not misplaced. Belgium has had long experience of foreign domination through the centuries. All the Powers which have sought the hegemony of Europe today have occupied it in turn and subjected it to them empire. It is in these unpropitious circumstances that there has grown up in Belgium a national spirit, native and robust, capable of preserving its personality through so many vicissitudes. •More than that, Belgium has been able to create progressively administrative, judicial and political institutions, distinctively its own, in short, all the organisms of a formal State, so that, when the hour of independence at last struck, nothing remained but to adapt this inherited experience to the new circumstances for the State to appear fully equipped, fully Prepared, and to take forthwith its honoured place in the con- cert of nations. Thus history shows us both the strength of the will to independence which has ceaselessly animated my Country and the gravity of the dangers to which this inde- pendence has been constantly exposed. To put it at the lowest these dangers have not diminished. Nowhere in the world, without question, do freedom and peace stand in greater need of an interrational guarantee than in the Low Countries, where so many highways cross, where human activity is so intense, and on is hich so many envious eyes are cast. But what guarantee will be definite enough, and what form of organisation will ensure its effective operation? Events in the last quarter of a century have thrown much valuable light on those questions. Belgium lived originally under the common guarantee of the European Powers. In spite of that she was attacked by two of her guarantors in 1914, and, though she was loyally defended, and enabled thus to regain her liberty in the end, the system none the less failed to prevent either the inva- sion of my country or general war. In 1925 Locarno brought us a whole collection of new guarantees, which there were good reasons for thinking stronger than the old. Hitler, none the less, solemnly repudiated the engagements which he had no less solemnly contracted. Since then what remained of the system has disintegrated progressively. I simply record the fact, without seeking for the moment to allot responsibility.

Belgium after that obtained two distinct guarantees, one given by France and the United Kingdom, the other by Germany. Then the history of 1914 was repeated. This time once more victory will deliver us, but war has not been avoided. After her renunciation at Locarno Belgium sought a new security in the tightening of the bonds which already united a certain number of small Western States. It is needless to dwell on the fundamental impotence of the Oslo Pact to pre- serve either general peace or the peace of its member-States. There is not, I imagine, a single reasonable Belgian who is not convinced of that after the experiences my country has been through. No form of regional union could by itself guarantee Belgian peace effectively or prevent the recurrence of a world catastrophe. Belgian peace could only be firmly based within a universal peace-system.

But it is assuredly not enough that a peace-system should be universal, still less that it should be nominally universal, to prove itself completely effective. Witness the League of Nations. Experience has proved the exact value of the Geneva institution—and has proved equally its insufficiency. Geneva, too, must profit by the stern lesson of facts. I can- not develop that thesis here at the close of an article. I must be content with indicating briefly two of the indispensable conditions of success. The required union must be assured of the active co-operation of all the major democracies, that of the United States being particularly essential. We see more clearly every day what American assistance in the war is mean- ing. What might the star-spangled Republic not have effected for the preservation of peace if it had understood in time that its frontier is on the Rhine! It is necessary, too, imperatively necessary, that co-operation should be organised on the basis of a society of equals. I do not mean by that that States of every varying magnitude must command the same votes—that indeed would create flagrant inequality—but simply that the citizens of every State must have the same opportunity of exercising their legitimate influence over the discussions of the society, and find the same protection for their own peace and the same guarantee of their essential rights. Among these latter one of the most essential is unquestionably the right to national independence, that is to say the right for each State to regulate its own life freely in the organised world with the same liberty as the individual citizen enjoys within each State.

The passion for this right runs strongly in the world. It is felt as ardently by peoples whom history has made small as by the most populous. I have tried to demonstrate that by the example of Belgium, but actually we are dealing with a fact which is completely universal—and very fortunate. The desire for independence must grow still stronger in proportion as the international solidarity of which it is the essential counterpart develops. For how in a united world would it be possible without it to preserve that diversity, that upsurge of individual and group originality without which there can be no intelligent life? If it were necessary to demonstrate the possibility of securing the co-existence in a single union of States of every magnitude, equally free and equally respected, and demonstrate further how invaluable this co-existence is, it would be sufficient to point to the example of the British Commonwealth, whose strength is so vastly increased by the complete equality of rights which exists within it between all those who enjoy Dominion status. But, let me hasten to add, the rights of small nations imply corresponding duties. It is by the full discharge of their duties during war that they may be assured of the plenitude of their rights in peace.