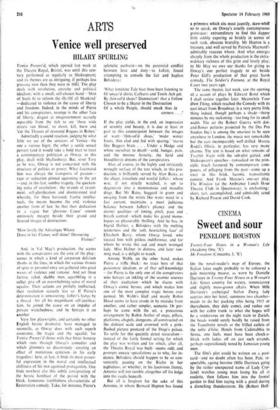 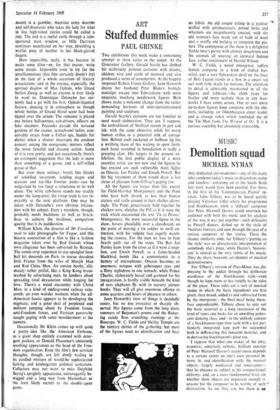 Twenty-Four Hours in a Woman's Life (Academy One, 'X')

On the novel-reader's map of Europe, the Italian lakes ought probably to be coloured a pzile mourning mauve, as worn by Danielle garrieux in Twenty-Four Hours in a Woman's Life. Great country for watery, renunciatory and slightly moss-grown affairs. When Mlle Darrieux's archetypal Stefan Zweig lady scurries into her hotel, summons two chamber- maids to do her packing (this being 1915 or thereabouts, they duly come), and rushes out with her cabin trunk to what she hopes will be a rendezvous on the night train to Zurich, the heads would surely hardly be raised from the Tauschnitz novels or the frilled cutlets of the table d'hOte. Hotels from Cadenabbia to Stresa, one feels, must have been chock-a- block with ladies off on just such errands, perhaps superciliously noted .by Jamesian young men.

The film's plot could be written on a post- card—and no doubt often has been. Pale, re- spectable, ageing heroine (Mlle Darrieux going by the rather unexpected name of Lady Cop- land) watches young man losing his all at roulette, then follows him into the formal garden to find him toying with a pistol during a drenching thunderstorm. He (Robert Hoff-

mann) is a gambler, Austrian army deserter and self-dramatist who takes the lady for what in less high-toned circles could be called a ride. The end is a rueful smile through a rain- spattered train window, as Mlle Darrieux continues undefeated on her way, shredding a wistful posy of heather in her black-gloved fingers.

How impossible, really, it has become to make some films—or, for that matter, write some novels. Impossible even to try for the unselfconscious (this film certainly doesn't try) in the face of a whole accretion of literary associations; and in the cinema, especially, the spirited shadow of Max Ophuls, who filmed Stefan Zweig as well as anyone is ever likely to want to. Dominique Delouche has cer- tainly had a go with his first, Ophuls-Itapoted feature, dousing it in atmosphere as though whole bottles of Grand Hotel scent had been tipped over the screen. The romance is played out before hall-porters, cab-drivers, officers on lake steamers. Peacocks parade the terraced gardens of the casino; screech-owl ladies, con- ceivably strays from a Fellini spa, huddle for shelter when a shower interrupts the outdoor concert among the evergreens; mirrors reflect the more fanciful and dreamy action. Some of it is very pretty, and just .occasionally there's an astringent suggestion that the lady is more than something of a goose, and a self-willed goose at that.

But even these settings—hotels like blocks of solidified ice-cream, landing stages and stations and toy-like frontier posts—can be vulgarised by too fussy a reluctance to let well alone. The white cab-horse stands too readily under the lamp-post; the troop train is too in- evitably at the next platform. One may be taken with Delouche's own obvious infatua- tion with his subject. Even a novelette, though, probably needs backbone as well as bric-i- brae to achieve the insidious, compulsive quality that is its justification.

William Klein, the‘director of Mr Freedom, used to take photographs •for Vogue, -and this bizarre -concoction of a film is like a fashion magazine taken -over by Red Guards whose own allegiance has been subverted by Batman.

and Red China Man. An outsize booby,I.ulti- nrately rather pitiful, like a King Kong brain-

washed by advertising -men, he lumbers about

spreading total devastation while laving- for love. There's a weird encounter with Christ

Man, in a kind of underground railway cata- comb; an even weirder moment when the all- American fascist appears -to be developing the stigmata; and a great deal of perplexed and militant jumping about by Freedom forces. anti-Freedom forces, and Parisian passers-by caught gaping with some bewilderment at the camera.

Occasionally Mr Klein comes up with quite a pretty idea like the American Embassy,

as a giant shop entirely crammed with deter- gent packets, or Donald Pleasence's ominously soothing appearances as the head of the Free- dom organisation. Even the film's few satirical thoughts, though, are -left dimly trailing in its curdled mixture of would-be sophisticated larking and kindergarten political caricature.

Collectors may not want to miss Delphine Seyrig's sprightly appearance, extravagantly be-

wigged and a long way from Marienbad, as the least likely recruit to the double-agent game.