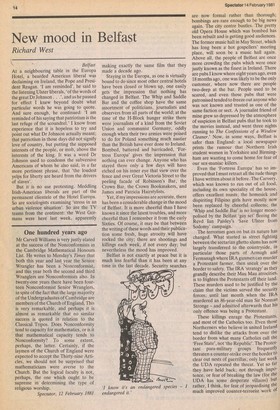 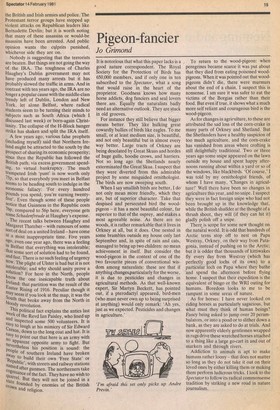 Belfast At a neighbouring table in the Europa Hotel, a bearded American liberal was declaiming on Ireland, the Pope and President Reagan. 'I am reminded', he said to the listening Ulster liberals, 'of the words of the great Dr Johnson. . .', and as he paused for effect I knew beyond doubt what particular words he was going to quote. And sure enough, he continued: 'I am reminded of his saying that patriotism is the last refuge of the scoundrel.' I know from experience that it is hopeless to try and point out what Dr Johnson actually meant; that patriotism in those days did not signify love of country, but putting the supposed interests of the people, or mob, above the interests of the king. It was a word Dr Johnson used to condemn the subversive Americans of whom he also said, in a far more pertinent phrase, that 'the loudest yelps for liberty are heard from the drivers of slaves'.

But it is no use protesting. Meddling Irish-American liberals are part of the permanent clientele of the Hotel Europa. So are sociologists examining 'stress in an urban violence situation'. So are the TV teams from the continent: the West Germans were here last week, apparently making exactly the same film that they made a decade ago.

Staying in the Europa, as one is virtually bound to do since most other central hotels have been closed or blown up, one easily gets the impression that nothing has changed in Belfast. The Whip and Saddle Bar and the coffee shop have the same assortment of politicians, journalists and observers from all parts of the world; at the time of the H-Block hunger strike there were journalists of a kind from the Soviet Union and communist Germany, oddly enough when their two armies were poised to do for Poland something much nastier than the British have ever done to Ireland. Bombed, battered and barricaded, 'Fortress Europa' gives the impression that nothing can ever change. Anyone who has stayed there only a few days will have etched on his inner eye that view over the fence and over Great Victoria Street to the peeling facade of Robinson's Bar, the Crown Bar, the Crown Bookmakers, and James and Patricia Hairstylists.

Yet, if my impressions are accurate, there has been a considerable change in the mood of Belfast. It is more cheerful than I have known it since the latest troubles, and more cheerful than I remember it from the early Sixties. Of course, it may be that between the writing of these words and their publication some fresh, huge atrocity will have rocked the city; there are shootings and killings each week, if not every day; but nevertheless the mood has improved.

Belfast is not exactly at peace but it is much less fearful than it has been at any time in the last decade. Security searches are now formal rather than thorough; bombings are rare enough to be big news again. The city centre bustles. The pretty old Opera House which was bombed has been rebuilt and is getting good audiences. The former music hall in May Street, which has long been a hot gospellers' meeting place, will soon be a music hall again. Above all, the people of Belfast are once more crowding the pubs which were once justly known as the finest in Ireland. There are pubs! know where eight years ago, even 18 months ago, one was likely to be the only customer, where now there are people two-deep at the bar. People used to be scared, and even those pubs that were patronised tended to freeze out anyone who was not known and trusted as one of the same faction or sect. A journalist friend of mine grew so depressed by the atmosphere of suspicion in Belfast pubs that he took to the movies instead, and went three nights running to The Confessions of a Window Cleaner.' Now, in some ways, Belfast is safer than England: a local newspaper prints the rumour that Northern Irish student women in Yorkshire and Birmingham are wanting to come home for fear of our sex-maniac killers.

Even the 'Fortress Europa' has so improved that I must retract all the rude things I have written about it before. The Carvery, which was known to run out of all food, including its own speciality of the house, offers excellent roasts; the homesick and dispiriting Filipino girls have mostly now been replaced by cheerful colleens; the 'Whip and Saddle Bar' is no longer monopolised by the Belfast 'gay set' fleeing the Revd Ian Paisley's 'Save Ulster from Sodomy' campaign.

The terrorism goes on but its nature has changed. What started as street fighting between the sectarian ghetto slums has now largely transferred to the countryside, in particular those parts of Armagh and Fermanagh where IRA gunmen can murder a Protestant farmer, then sneak over the border to safety. The IRA 'strategy' as they grandly describe their Mau Mau atrocities, is to frighten the Protestants off their land. These murders used to be justified by the claim that the victims served the security forces; until last month when the IRA murdered an 86-year-old man Sir Norman Stronge — and admitted afterwards that his only offence was being a Protestant.

These killings enrage the Pkotestants, and most of the Catholics too. Even those Northerners who believe in united Ireland tend to dislike the attacks from over the border from what many Catholics call the 'Free State', not 'the Republic'. The Protestant para-military groups frequentiY threaten a counter-strike over the border to clear out nests of guerrillas; only last week the UDA repeated the threat. Yet so far they have held back; not through impu tence, or fear of breaking the law (for the UDA has some desperate villains) but rather, I think, for fear of jeopardising the much improved counter-terrorist work of the British and Irish armies and police. The Protestant terror groups have stepped up violent attacks on Republican leaders like Bernadette Devlin; but it is worth noting that many of these assassins or would-be assassins have been arrested. And public opinion wants the cnlprits punished, whichever side they are on.

Nobody is suggesting that the terrorists are beaten. But things are not going the way of the IRA. The toughness of Charles Haughey's Dublin government may not have produced many arrests but it has probably slowed the traffic in arms. And in contrast with ten years ago, the IRA are no longer a popular cause with the middle-class trendy left of Dublin, London and New York, let alone Belfast, where radical students seem to be turning their minds to subjects such as South Africa (which I discussed last week) or born-again Christianity. The collapse of the H-Block hunger strike has shaken and split the IRA itself.

A few years ago, various false prophets (including myself) said that Northern Ireland might be attracted to the south by the Prospect of sharing its economic prosperity; since then the Republic has followed the British path, via excess government spending, to virtual bankruptcy. The much trumpeted Irish 'punt' is now worth only 7513, so that everybody you meet in Belfast seems to be heading south to indulge in the economic fallacy: 'For every hundred Pounds you spend, you're earning twentyfive'. Even though some of these people notice that Guinness in the Republic costs 761P, compared to 56p here, everyone gets some Schadenfreude at Haughey's expense. The recent talks between Haughey and Margaret Thatcher with rumours of some sort of deal on a united Ireland — have come at a most inappropriate time. Five years even one year ago, there was a feeling in Belfast that everything was intolerable; that some sort of solution had to be found, and fast. There is no such feeling of urgency !low. The plight of Ulster is bad but it is not Intolerable; and why should unity prove a solution? For here in the North, people k, now the one inetcapable truth about ,...'reland: that partition was the result of the taster Rising of 1916. Peculiar though it ay seem if you look at the map, it was the fnlith that broke away from the North in oloody revolution. This political fact explains the antics last week of the Revd Ian Paisley, who lined up aend inspected some 500 volunteers. It is easy to laugh at his mimicry of Sir Edward e arson t down to the long coat and hat. It is naosY to point out that here is an army with nevaPParent opposite army to fight. But Pe ertheless his position is sound: the o P‘e of southern Ireland have broken ,i'vtlY to build their own 'Free State' or naepublic% with streets and railway stations med after gunmen. The northerners take `,..ngnisance of the fact. They have no wish to 4_1:at rrei But they. will not be joined in a e founded by enemies of the British ‘r wn and religion.