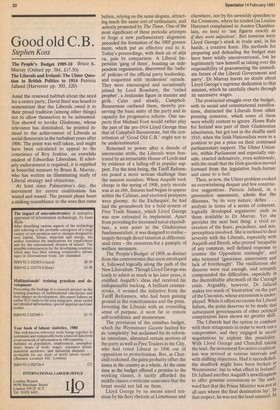 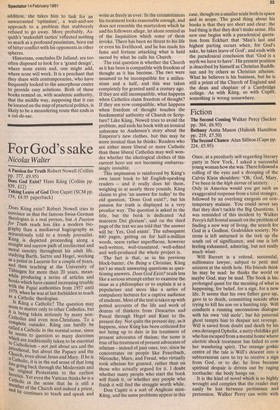 The People's Budget 1909-10 Bruce K. Murray (Oxford pp. 384, £17.50) The Liberals and Ireland: The Ulster Question in British Polities to 1914 Patricia Jalland (Harvester pp. 303, £20) Amid the renewed hubbub about the need for a centre party, David Steel was heard to remonstrate that the Liberals owed it to their proud tradition (among other things) not to allow themselves to be subsumed. Too shrewd to invoke Gladstone, whose relevance has diminished, he pointed instead to the achievement of Liberals as social democrats in the turbulent years after 1906. The point was well taken, and might have been calculated to appeal to the conscience of Roy Jenkins, an erstwhile student of Edwardian Liberalism. If scholarly endorsement is required, it is supplied in bountiful measure by Bruce K. Murray, who has written an illuminating study of Liberal strategy and objectives.

At least since Palmerston's day, the movement for centre coalitionism has waxed and waned. The present phase bears a striking resemblance to the ones that came before, relying on the same slogans, attracting much the same sort of enthusiasts, and actively promoted by The Times. One of the most significant of these periodic attempts to forge a new parliamentary alignment preceded the formation of the 1905 government, which put an effective end to it. Today's proceedings, with their air of deja vu, pale by comparison. A Liberal Imperialist 'gang of three', boasting an independent organisation, disavowed the 'radical' policies of the official party leadership, and coquetted with 'moderates' outside. They were encouraged and occasionally joined by Lord Rosebery, the 'veiled prophet', a Jenkinsite figure in manner and girth. Calm and steady, CampbellBannerman outfaced them, thereby preserving the basic unity of the party and its capacity for progressive reform. One suspects that Michael Foot would rather play the part of the pre-1914 Lloyd George than that of Campbell-Bannerman, but the contribution of 'Good Old C.B.' ought not to be underestimated.

Returned to power after a decade of internecine strife, the Liberals were frustrated by an intractable House of Lords and by evidence of a falling-off in popular support. For the time being, the Tariff Reformers posed a more serious challenge than the nascent socialists. When Asquith took charge in the spring of 1908, party morale was at an ebb, fissures had begun to appear within the Cabinet, and electoral prospects were gloomy. At the Exchequer, he had laid the groundwork for a bold system of Free Trade finance, „which Lloyd George was now entrusted to implement. Apart from providing for increased naval expenditure, a sore point to the Gladstonian fundamentalists, it was designed to realise — largely through direct taxation at differentiated rates — the resources for a panoply of welfare measures.

The 'People's Budget' of 1909, as distinct from the controversies that soon enveloped it, followed logically along the path of the New Liberalism, Though Lloyd George was loath to admit as much in his later years, it codified Asquith's ideas and received his indispensable backing. A brilliant counterstroke, it wrested the initiative from the Tariff Reformers, who had been gaining ground in the constituencies and the press. Investing the Liberals with an overriding sense of purpose, it went far to restore self-confidence and momentum.

The provisions of the omnibus budget, which the Westminster Gazette faulted for its 'complexity' but acclaimed for its reformist intentions, alienated certain sections of the party as well as Free Traders in the City, who had voted Liberal in 1906 out of opposition to protectionism. But, as Chur chill reckoned, the gains probably offset the losses in the country as a whole. At the same time as the budget offered a promise to the working classes, . it tacitly afforded the middle classes a welcome assurance that the brunt would not fall on them.

Lloyd George by no means eased tensions by his fiery rhetoric at Limehouse and elsewhere, nor by his unwieldy speeches to the Commons, where he tended (as Loulou Harcourt complained to Austen Chamberlain, no less) to 'use figures exactly as if they were adjectives'. But tensions were Lloyd George's stock in trade and, in his hands, a creative force. His methods for preparing and defending the budget may have been wildly unconventional, but he legitimately 'saw himself as taking over the responsibility of guaranteeing the immediate future of the Liberal Government and party'. Dr Murray leaves no doubt about Lloyd George's supreme dedication to that mission, which he carefully charts through its successir stages. The protracted struggle over the budget, with its social and constitutional ramifications, distracted the Liberals from other pressing concerns, which some of them were wholly content to ignore. Home Rule for Ireland was part of their Gladstonian inheritance, but got lost in the shuffle until 1910, when the Irish Nationalists were in a position to put a price on their continued parliamentary support. The Ulster Unionists, within Parliament and especially outside, reacted defensively, even seditiously, with the result that the Irish question moved forward from the legislative back-burner and came to a boil.

Then, as now, the Ulster problem evoked an overwhelming despair and few constructive suggestions. Patricia Jalland, in a provocative assessment, admits that the dilemma, 'by its very nature, defies . . . analysis in terms of a series of coherent, logically developed arguments' such as those available to Dr Murray. Yet she provides the next best thing: a vivid recreation of the fears, prejudices, and misperceptions involved. She is inclined to deal severely with the Liberals, especially with Asquith and Birrell, who proved 'incapable of any common, well defined response to counter the Opposition onslaught', and who betrayed 'ignorance, uncertainty and lack of forethought'. The vacillations she discerns were real enough, and certainly compounded the difficulties, especially in the discreditable aftermath of the Curragh crisis. Arguably, however, Dr Jalland makes too much of 'frustration' on the part of the Unionists, whose extremism is underplayed. While it offers no excuse for Liberal failure, the point deserves to be made that subsequent governments of other political complexions have shown no greater skill.

The Liberals had the option to combine with their antagonists in ordor to work out a compromise, and they engaged in secret negotiations to explore this possibility. With Lloyd George and Churchill taking the lead, the movement for centre coalition ism was revived at various intervals and with shifting objectives. Had it succededed, the deadlock might have been broken at Westminster, but to what effect in Ireland? Dr Jalland ascribes Asquith's unwillingness to offer genuine concessions to 'the awkward fact that the Prime Minister was not at all sure where the final destination lay'. In that respect, he was not the least unusual. In addition, she takes him to task for an unwarranted 'optimism', a wait-and-see approach to a problem that stubbornly refused to go away. More probably, Asquith's 'makeshift tactics' reflected nothing so much as a profound pessimism, born out of bitter conflict with his opponents in other spheres.

Historians, concludes Dr Jalland, are too often disposed to look for a 'grand design', where none exists and, one might add, where none will work. It is a penchant that they share with contemporaries, who have frequently looked to the amorphous centre to provide easy solutions. Both of these books remind us, with academic authority, that the middle way, supposing that it can be located on the map of practical politics, is likely to be a meandering route that ends in a cul-de-sac.