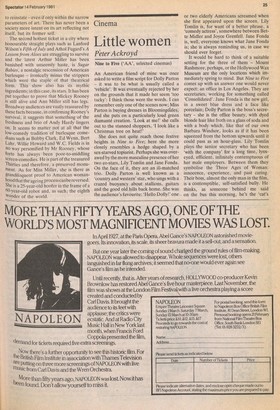 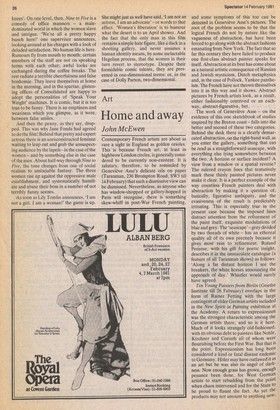 Pieter Ackroyd Nine to Five ('AA', selected cinemas) An American friend of mine was once asked to write a film script for Dolly Parton — it was to be what is usually called a 'vehicle'. It was eventually rejected by her on the grounds that it made her seem 'too tacky': I think those were the words. I can remember only one of the scenes now; Miss Parton is buying dresses in Bloomingdales, and she puts on a particularly loud green diamante creation. 'Look at me!' she calls out to the stunned shoppers, 'I look like a Christmas Tree on heat!'

She does not quite reach those festive heights in Nine to Five; here she more closely resembles a hedge shaped by a sex-starved topiarist. Perhaps she was overawed by the more masculine presence of her two co-stars, Lily Tomlin and Jane Fonda. On the face of it, they are an ill-matched trio. Dolly Parton is well known as a 'country and western' star, who sings with a crazed buoyancy about stallions, guitars and the good old hills back home. She was the audience's favourite: 'Hello Dolly!' one or two elderly Americans screamed when she first appeared upon the screen. Lily Tomlin is, for want of a better phrase, a 'comedy actress', somewhere between Bette Midler and Joyce Grenfell. Jane Fonda is, well, everyone knows what Jane Fonda is; she is always reminding us, in case we should ever forget.

It would be hard to think of a suitable setting for the three of them — Mount Rushmore, perhaps, or the Hollywood Wax Museum are the only locations which immediately spring to mind. But Nine to Five comes up with an answer one would never expect: an office in Los Angeles. They are secretaries, working for something called 'Consolidated'. Jane Fonda is the new girl, in a sweet blue dress and a face like porcelain; Dolly Parton is the boss's secretary — she is the office beauty, with dyed blonde hair like froth on a glass of soda and with a body which, like that of our own Barbara Windsor, looks as if it has been squeezed from the bottom upwards until it could pass as an hour-glass. Lily Tomlin plays the senior secretary who has been 'with the company' for a long time, lynxeyed, efficient, infinitely contemptuous of her male employers. Between them they symbolise the Three Ages of Woman: innocence, experience, and past caring. Their boss, almost the only man in the film, is a contemptible, self-satisfied bully. He thinks, as someone behind me said on the bus this morning, he's the 'cat's knees'. On one level, then, Nine to Five is a comedy of office manners — a maledominated world in which the women slave and intrigue. 'We're all a pretty happy bunch here!' one supervisor announces, looking around at his charges with a look of deluded satisfaction. No human life is here. Rumours fly from mouth to mouth; certain members of the staff are not on speaking terms with each other; awful looks are exchanged during the coffee breaks. The rest radiate a terrible cheerfulness and false bonhomie. They leave themselves at home in the morning, and in the spartan, glistening offices of Consolidated are happy to adopt the personalities of 'Speak Your Weight' machines. It is comic, but it is too true to be funny. There is an emptiness and weariness which you glimpse, as it were, between false smiles.

And then the penny, as they say, dropped. This was why Jane Fonda had agreed to do the film! Behind that pretty and expert actress there is an unreconstructed feminist waiting to leap out and grab the unsuspecting audience by the lapels—in the case of the women — and by something else in the case of the men. About half-way through Nine to Five, the tone changes from one of social realism to unsociable fantasy. The three women rise up against the oppressive male establishment, and systematically humiliate and abuse their boss in a number of not terribly funny scenes.

As soon as Lily Tomlin announces, 'I am not a girl. I am a woman!' the game is up. She might just as well have said, 'I am not an actress, I am an advocate' — or words to that effect. 'Women's liberation' is to humour what the desert is to an April shower. And the fact that the only man in this film remains a simple hate figure, like a duck in a shooting gallery, and never assumes a human identity means, by some ineluctable Hegelian process, that the women in their turn revert to stereotype. Despite their formidable comic talents, they are presented in one-dimensional terms: or, in the case of Dolly Parton, two-dimensional.