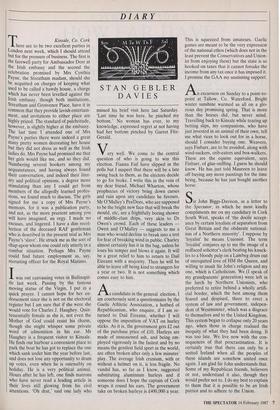 STAN GEBLER DAVIES Kinsale, Co. Cork here are to be two excellent parties in London next week, which I should attend but for the pressure of business. The first is the farewell party for Ambassador Dorr at the Irish embassy and the second the celebration promised by Mrs Cynthia Payne, the Streatham madam, should she be acquitted on charges of keeping what used to be called a bawdy house, a charge which has never been levelled against the Irish embassy, though both institutions, Streatham and Grosvenor Place, have it in common that they provide lavish entertain- ment, and invitations to either place are highly prized. The standard of pulchritude, however, is slightly higher at the embassy. The last time I attended one of Mrs Payne's parties there were indeed a great many pretty women decorating her house but they did not dress as well as the Irish ladies do. Mrs Payne had promised me that her girls would like me, and so they did. Numbering several hookers among my acquaintances, and having always found their conversation, and indeed their liter- ary and political opinions, a degree more stimulating than any I could get from members of the allegedly learned profes- sions, we found much to discuss. The girls signed for me a copy of Mrs Payne's memoirs, for it was a publication party, and not, as the more prurient among you will have imagined, an orgy. I made no excuses, and lingered. I have a dim recol- lection of the deceased RAF gentleman who is described in the present trial as Mrs Payne's 'slave'. He struck me as the sort of chap upon whom one could rely utterly in a combat situation. Perhaps Mrs Payne could find future employment as, say, recruiting officer for the Royal Marines.

I tle was out canvassing votes in Ballinspit- last week. Passing by the famous moving statue of the Virgin, I put in a quick prayer. I cannot hope for her en- dorsement since she is not on the electoral register but I am sure that if she were she would vote for Charles J. Haughey. Quin- tessentially female as she is, not even the Mother of God could resist his charm, though she might whisper some private word of admonition in his ear. Mr Haughey is a frequent visitor to Kinsale. He finds our harbour a convenient place to park the boat he has got to replace the one which sank under him the year before last, and does not lose any opportunity to drum up votes, even when he is ostensibly on holiday. He is a very political animal. Hours after he has left, one finds matrons who have never read a leading article in their lives still glowing from his civil attentions. 'Oh drat,' said one lady who missed his brief visit here last Saturday. `Last time he was here, he pinched my bottom.' No woman has ever, to my knowledge, expressed regret at not having had her bottom pinched by Garret Fitz- Gerald.

Very well. We come to the central question of who is going to win this election. Fianna Fail have slipped in the polls but I suspect that there will be a late swing back to them, as the electors decide to go for broke. I write this in the vein of my dear friend, Michael Wharton, whose prophecies of victory bring down curses and ruin upon any candidate he favours. Mr O'Malley's PeeDees, who are supposed to be the bright new face that will break the mould, etc, are a frightfully boring shower of middle-class drips, very akin to Dr Owen's crowd. Each of these leaders Owen and O'Malley — suggests to me a man who would decline to break into a trot for fear of breaking wind in public. Charley almost certainly has it in the bag, unless he loses his temper and blows it again. It will be a great relief to him to return to Dail Eireann with a majority. Then he will be able to leave off being kind to strangers for a year or two. It is not something which comes easy to him.

As candidate in the general election, I am courteously sent a questionnaire by the Gaelic Athletic Association, a hotbed of Republicanism, who enquire, if I am re- turned to Dail Eireann, whether I will oppose the imposition of VAT on hurley sticks. As it is, the government gets £2 out of the purchase price of £10. Hurleys are made of unseasoned ash, and being em- ployed vigorously in the fastest and by no means the gentlest field sport in the world, are often broken after only a few minutes' play. The average Irish cranium, with or without a helmet on it, is less fragile. No vandal has, so far as I know, suggested substituting aluminium hurleys and if someone does I hope the captain of Cork wraps it round his ears. The government take on broken hurleys is £400,000 a year. This is squeezed from amateurs. Gaelic games are meant to be the very expression of the national ethos (which does not in the least prevent the Conservatives and Union- ist from enjoying them) but the state is so hooked on taxes that it cannot forsake the income from any tax once it has imposed it. I promise the GAA my unstinting support.

An excursion on Sunday to a point-to- point at Tallow, Co. Waterford. Bright winter sunshine warmed us all on a glo- rious day promising spring. That is more than the horses did, but never mind. Travelling back to Kinsale while tearing up betting slips, my companions, who have just invested in an animal of their own, tell me what vices to look out for in a horse, should I consider buying one. Weavers, says Finbarr, are to be avoided, along with wind-suckers, crib-eaters and box-walkers. These are the equine equivalent, says Finbarr, of glue-sniffing. I guess he should know. He has just told Maureen to leave off buying any more paintings for the time being, because he has just bought another horse.

Sit John Biggs-Davison, in a letter to the Spectator, in which he most kindly compliments me on my candidacy in Cork South West, speaks of 'the docile accept- ance by certain loyalists of separation from Great Britain and the obdurate national- ism of a Northern minority'. I suppose by `loyalist' he means Unionist. The term `loyalist' conjures up to me the image of a redfaced solicitor's clerk beating his knuck- les to a bloody pulp on a Lambeg drum out of unrequited love of HM the Queen, and willing to insult Sir John's religion and my one, which is Catholicism. We (I speak of my grandparents' generation) were left in the lurch by Northern Unionists, who preferred to retire behind a wholly artifi- cial border, which the best among them feared and despised, there to erect a system of law and government, indepen- dent of Westminster, which was a disgrace to themselves and to the United Kingdom. This system began to collapse only 20 years ago, when those in charge realised the inequity of what they had been doing. It was too late. We live now with the con- sequences of that procrastination. It is certainly true that there can only be a united Ireland when all the peoples of these islands are somehow united once again. I am glad Sir John understands that. Some of my Republican friends, believers or not, understand it also, though they would prefer not to. I do my best to explain to them that it is possible to be an Irish patriot and to adhere to the Union.