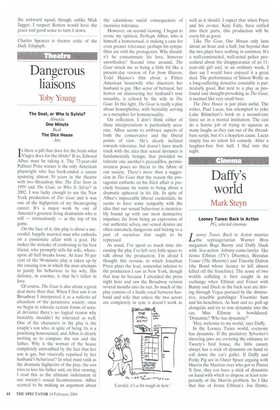 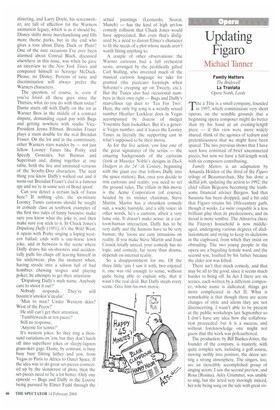 Iooney Tunes: Back in Action marries i I the septuagenarian Warner Bros megastars Bugs Bunny and Daffy Duck with live-action Johnny-come-latelys like Jenna Elfman (TV's Dharrna), Brendan Fraser (The Mummy) and Timothy Dalton (the Bond whose licence to kill almost killed off the franchise). The sense of two worlds colliding is best caught in an exchange when Elfman and Fraser with Bunny and Duck in the back seat are driving through Vegas pursued by the diminutive, irascible gunslinger Yosemite Sam and his henchmen. As Sam and co. pull up alongside and try to toss dynamite into the car, Miss Elfman is bewildered: 'Dynamite? Who has dynamite?'

In the Looney Tunes world, everyone has dynamite. If the predatory Sylvester's slavering jaws are covering the entrance to Tweety's bird house, the little canary always has a stick of dynamite on hand to roll down the cat's gullet. If Daffy and Porky Pig are in Outer Space arguing with Marvin the Martian over who got to Planet X first, they too have a stick of dynamite on hand with which to dispose at least temporarily of the Marvin problem. So I like that line of Jenna Elfmads. Joe Dante,

directing, and Larry Doyle, his screenwriter, are full of affection for the Warners animation legacy, which is as it should be. Disney shifts more merchandising and fills more theme parks, but in the end who gives a toss about Daisy Duck or Pluto? One of the rare occasions I've ever been alarmed about Conrad Black, discussed elsewhere in this issue, was when he gave an interview to the New York Times and compared himself to Scrooge McDuck. Please, no Disney. Persons of taste and discrimination will always prefer the Warners characters.

The question, of course, is, even if you've loved all these guys since the Thirties, what do you do with them today? Dante starts off with Daffy on the lot at Warner Bros in the middle of a contract dispute, demanding equal pay with Bugs and getting nowhere with studio VicePresident Jenna Elfman. Brendan Fraser plays a stunt double for the real Brendan Fraser. On the lot and in the commissary, other Warners stars wander by — not just fellow Looney Tunes like Porky and Speedy Gonzales, but Batman and Superman and, dining together at one table, both the live and animated versions of the Scooby-Doo characters. The next thing you know Daffy's walked out and it turns out Brendan Fraser's dad is a famous spy and we're in some sort of Bond spoof.

Can you detect a certain lack of focus here? If nothing else, the six-minute Looney Tunes cartoons should be taught in comedy class as textbook examples of the first two rules of funny business: make sure you know what the joke is, and then make sure you stick to it. In Chuck Jones's Dnpalong Daffy (1951), it's the Wild West: it opens with Porky singing a loping western ballad, ends with a one-horse town joke, and in between is the scene where Daffy draws his six-shooters and accidentally pulls his chaps off leaving himself in his underwear, plus the moment when, having strode into a saloon full of bad hombres chewing stogies and playing poker, he attempts to get their attention: `Dripalong Daffy's muh name. Anybody care to shoot it out?'

Nobody responds. They're still boozin'n'smokin'n'dealin'.

'Man to man? Under Western skies? West of the Pecos'?'

He still can't get their attention.

It's western jokes. So they ring a thousand variations on 'em, but they don't lurch off into superhero jokes or sleepy-lagoon grass-skirt gags. Dante, by contrast, is bus■ busy busy flitting hither and yon, from Vegas to Paris to Africa to Outer Space. If the idea was to do great set-pieces connected up by the slenderest of plots, then the set-pieces need to be a lot better. Only one episode — Bugs and Daffy in the Louvre being pursued by Elmer Fudd through the actual paintings (Leonardo, Seurat, Munch) — has the kind of high art/low comedy collision that Chuck Jones would have appreciated. But even that's disfigured by a need to distort Elmer's character to fit the needs of a plot whose needs aren't worth fitting anything to.

A couple of other observations: the Warner cartoons had a full orchestral score, arranged by the prolifically gifted Carl Stalling, who invented much of the musical cartoon language we take for granted (the pizzicato footsteps when Sylvester's creeping up on Tweety, etc.). But the Tunes also had occasional numbers in their own right — Bugs and Daffy's marvellous tap duet to 'Tea For Two'. Here, the only big song is a weirdly sexual number Heather Locklear does in Vegas accompanied by dozens of midget Yosemite Sam lookalikes. But it's a generic Vegas number, and it leaves the Looney Tunes as literally the supporting cast in what's supposed to be their movie.

As for the live action, you lose one of the great signatures of the series — the amazing backgrounds of the cartoons (look at Maurice Noble's designs in Duck Dodgers in the 24'1'4h Century, beginning with the giant eye that follows Daffy into the space station). But, once you decide to mix cartoons and reality, you need to set the ground rules. The villain in this movie is the Acme Corporation (of course), headed by its sinister chairman, Steve Martin. Martin has a shrunken comedy suit, a wacky hairstyle, and a silly voice: in other words, he's a cartoon, albeit a very lame one. It doesn't make sense: in a cartoon/human interaction, Daffy has to be very daffy and the humans have to be very human: the 'toons are zany intrusions on reality. If you make Steve Martin and Joan Cusack totally unreal, your comedy has no logic, and comedy, far more than drama, depends on internal reality.

So a disappointment for me. Of the three little 'uns I saw it with, two enjoyed it, one was old enough to sense, without quite being able to explain why, that it wasn't the real deal. But Daffy steals every scene. Give him his own movie.