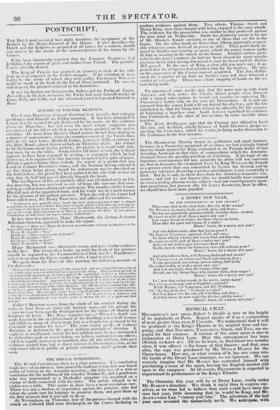 The Court-Martial OH Colonel Brereton is at an end; that unhappy gentleman shot himself on Friday morning. It had been remarked in Court, that he seemed deeply distressed by the nature of the evidence given on Thursday ; lao not even the most remote suspicion was entertained of the effect wIlich it seems to have produced on his under- standing. He went from Reeve's Hotel (where he had been staying as a matter of convenience, since the commencement of the Court-Mar- tial) to his own house, Redfield Lodge, Lawreece Hill—a cottage on the Bath Road—tilmut eleven o'clock on Thursday night. He retired to his bedroom about twelve o'clock ; his pistols, as is usual with mili- tary men, lay on the table. From twelve till three o'clock, the Colonel appears to have been engaged in writing; a statement which be had drawn up, it is supposed in that interval, occupied half a quire of paper. About a quarter before three o'clock, the report of a pistol-shot was beard in Colonel Brereton's room ; and the footman having entered it on the alarm being given, found his unfortunate master stretched on the bed lifeless : the pistol had been pointed to his side with so true an aim, that the ball had passed directly through the heart.

The intelligence of this melancholy affair was circulated early on Fri- day morning, but was received as one of those idle rumours that com- monly prevail at times of unusual excitement. The members of the Court- Martial met at the appointed hour, and the truth was first made known by the absence of the gallant prisoner. When the roll of the Court had been called over, Sir Henry Fane rose, and addressed the members-

" Gentlemou, you probably have heard the most distressing report that is abroad respecting the prisoner, Colonel Brercton—It report which I fear, front his non-appear- :Luce here at this hour, is too true. J have sent the District Surgeon, and the olliver act- ing as Assistant Adjutant-General in Bristol, to ascertain the facts. If you please, Gentlemen, we will await the report of these individuals."

In less than five minutes, Major Mackworth, the Acting-Assistant Adjutant-General, appeared to make his report. President—" lIave you, Major Mackworth, in conformity with my orders, been at the house of Cotontd Itrereton?- Major M,d;wort1,—" Yes." President ---, I lava yon seen the Colonel ?"

to the fact. The Court then broke up until the death of the prisoner should be reported to the Commander-in-Chief, and II's Excellency's orders respecting the futi;re conduct of the Court received. We quote from the Times of this morning the following account of the decetted- '.' (Th,lotwl Brereton was very respectably connected, and we, alout lifts'-two years of Harty-0:ov years of NvIdell had spent in the Army. Thoo.;,h never present in eny reratrkAte engagement, he lout aNpured tlw reputation or being a trustworthy nt mivit ti. its ollicer. lie served at to' ('ape of Good Hope dari.!g the government cif Lord Cita des Somerset. Appointed to lie command of a rezitat7tit on the Caffre vt hr (reported as being it, a stm• of itetultordIanti. to). he wa-t hit x.14ed by the GO. • 'non with the command of the whol,, frontier. The ,,:beers hie regiment (the 49th, tot j, al presented hitt!, throwsli Sir limy Torten:. wit It n smell valued at two Itund..ett go:liens. lie 1: a t'ig: vans Inspeeting a the Bristol district, where he s,weectled Camel 1 taalell, by exchange. The 11,,en,,,1 was a widower, and has left too daughters of %cry tender years to mourn the 9tte of a good and kind parent."

Colonel Brereton seems, from the whole of his conduct during the riots, to have been an eminently humane man; and his private life :: 'ems to have been equally distinguished for the virtues of charity and kindness of heart. The Times reporter says—,, When his death was made known in the neighbourhood of his dwelling, a crowd of women and children, many of whom wept him as a beneenetor, gathered to his threshold to mourn his loss." The same writer spraks of Colonel Brereton as deficient in the great military principle of decision. It .qught to be recollected, that in his last military acts, Ile was surrounded II)' difficulties such as never before, we believe, surrounded any officer; and it is equally necessary to recollect, that all the civilians, who gave evidence against him, had a direct interest in his condemnation, as the only event which in public or private estimation could prevent their own.