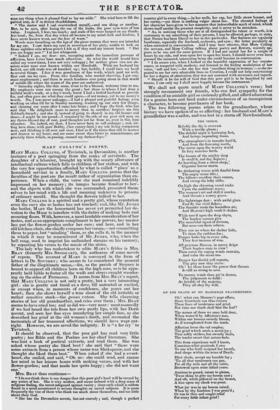 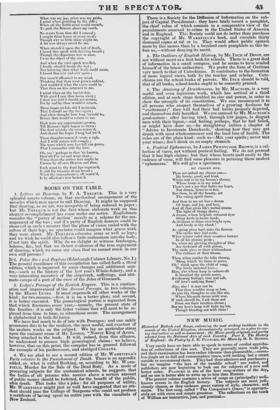 MARY MARIA COLLING, of Tavistock, in Devonshire, is another instance of a poet springing from the ranks of servitude. The daughter of a labourer, brought up with the scanty allowance of intellectual culture which falls to children of her station, and with the very few opportunities afforded by what is called "place" as a household servant in a family, MARY COLLING proves that the faculties of the poet are the result rather of organization than ex- perience. When a child, the verse she read remained indelibly impressed on her memory; its images became familiar to her - and the objects with which she was surrounded, presented them; selves to her mind with a life and meaning unknown to persons of ordinary mould. She thought the flowers talked to her.

MARY COLLING is a spirited and a pretty girl, whose reputation even the envy she so lashes has not touched; and, like Mr. JONES the butler, MARY the housemaid has never yet permitted her de- votion to the Muse to interfere with the duties of making beds and scouring floors. With, however, a most laudable consideration of her tastes, and as an appropriate compliment to her powers, her master has put the flower-garden under her care; and here, and in her old kitchen-chair, she chiefly composes her verses,—not committing them to paper, but "minding" them, as she calls it, in the manner in which it may be remembered of Mr. JoxEs, who, when the bell rang, used to imprint his unfinished stanzas on his memory, by repeating his verses to the music of the stairs.

The lady who has undertaken to edite MARY'S fables is Mrs. BRAY (formerly Mrs. STODHART), the authoress of some novels of repute. The account of MARY is conveyed in the form of letters to Dr. SOUTHEY; who seems to be considered the general father of the illegitimate muse,—for, as the parish of Stepney is bound to support all children born on the high seas, so is he appa- rently held liable to foster all the waifs and strays caught wander- ing on the sides of Parnassus. It seems from Mrs. BRAY'S report, that MARY COLLING is not only a pretty, but a very interesting girl : she is gentle and timid as a dove, till animated or excited, or except when, in moments of confidence, she pours out her heart; then she shows herself a true shoot of the old irritable or rather sensitive stock—the genus ratum. She tells charming stories of her old grandmother, and cries over them ; Mrs. BRAY seems to have cried too; and so did we—very near: most assuredly if we had heard the tale from her own pretty lips, with her Doric accent, and seen her fine eyes inundating her simple face, as she described her grief at the old woman's death, and recounted the memorials of her treasured affections, we should have wept out- right. However, we are saved the indignity. It is "a far cry" to Tavistock.

It should be observed, that the poor girl has read very little poetry; her Bible and the Psalms are her chief literature. She was lent a book of poetical extracts, and read them. She was asked whose poetry she liked best ? she said that "there were some extracts from a person whose name was Shakspeare, and she thought she liked them best." When asked if she had a sweet- heart, she smiled, and said, "Oh no; she could read, and amuse her mind in her leisure hours with making verses, and with her flower-garden; and that made her quite happy; she did not want one."

Mrs. BRAY thus continues— g, I clo. not think there is any danger that this poor girl's head will be turned by any notice of her. She is very modest, and seems imbued with a deep sense of religious feeling, the surest safeguard against vanity; since such a fault is seldom found in a inind accustomed to serious thoughts on sacred subjects. It is more frequently the vice of those who think too much about themselves, and too little about their God.

"She has the Devonshire accent, but not coarsely ; and, though a perfect

country girl in every thing,—in her smile, her cap, her little straw bonnet, and her curtsy,—yet there is nothing vulgar about her. The elevated feelings of her character have given to her manners that indescribable mark of mind, which shows itself amidst the greatest simplicity, and is never to be mistaken.

"As, in noticing those who are at all distinguished for talent or worth, it is customary to say something of their persons, I maybe allowed, perhaps, to state, that Nature has been liberal to her in this particular. Her features are regularly handsome, especially the forehead, eyebrows, and eyes ; the latter peculiarly so when animated in conversation. And I may here observe, that Mary Colling the servant, and Many Coning talking about poetry and flowers, scarcely ap- pears to be one and the same person. If I had not seated her for a couple of hours by my side, and won upon her to open her heart, I should never even have guessed the animated, interesting being she could become in conversation.

"I do assure you, when I looked on the beautiful expression of her counte- nance, so tempered with modesty, and listened to the feeling modulation of her voice, soft and low,'—for she has that 'excellent thing in woman,'--as she re- peated to me her own admirable lines on Creation, I could not help entertaining for her a degree of admiration that was not unmixed with reverence and regard-

" Should it be the will of God that this poor girl is to be benefited by our means, I can only say I shall most happily become the instrument."

We shall not quote much of MARY COLLING'S verse; but strongly recommend our friends, who can feel sympathy for the condition of an amiable girl so curiously gifted, and afford admiration for a genius born and bred under circumstances of so inauspicious a character, to become purchasers of her book. The two following poems relate to the grandmother, whose history we have spoken of as so affecting : her husband and MARY'S grandfather was a sailor, andwas lost in a storm off Newfoundland.

Behold, the sky is overcast With a terrific gloom; The doleful night is hastening fast, And brings impending doom.

The atmosphere's in tumults hurrd, And from the frowning north, The storm upon the watery world In fury marches forth.

The bosom of the mighty deep Is swelrd, and day. departs ; As bursting from a silent sleep,: Gigantic horror starts.

Its darkening waves with fearful force The angry ocean lifts; The billows overflow their course, And sweep the lofty clifts.

On high the shivering vessel rocks Upon the ambitious wave; The seaman's art and skill it mocks, And threats a watery grave.

The lightnings dart : with awful glare Fast fly the vivid flakes ; The thunder rends the boundless air, And Heaven's high vault it shakes.

While toss'd upon the deep abyss, The hapless seamen give The mournful signal of distress, But none can them relieve.

They can no where for shelter hide, To shun the ruthless foe; Danger looks big on every side, They fear increase of woe.

Thou canst the raging winds restrain, And calm the ocean too.

Danger her direful yell repeats, Thy pity now they crave: ! let them know the power that threats Is still as strong to save.

To stormy winds thou giv'st decree, Thy judgments to fulfil : As heralds of thy majesty, They all obey thy will.

ON THE DEATH OF MY MATERNAL GRANDMOTHER.

Oh! what can Memory's page efface, Since Gratitude can thus retrace These lines of tenderness and grief; Nor time nor death shall blot the leaf?

The names of those we once held dear, When water'd by Affection's tear, Within our bosoms sweetly bloom, As if transplanted from the tomb.

Affection loves the sad employ, The grief which steals a secret joy; That softly strikes, but sweetly heals, The tender smart that nature feels.

This from experience well I know, Conscious what gratitude I owe To one who bath resigned her breath, And sleeps within the arms of Death.

Blest shade, accept my humble lay; 'Tis all that tenderness can pay, For all thy toils and all thy cares, Bestowed upon mine infant years.

Anxious to guard, intent to please, 'Twas thine to give my bosom ease; And oft, while pillowed on thy breast, A kiss upon my cheek was pre,st.

What joy was in my bosom raised, When by thy kindness I was prais'd ; Or ran to thee and sought relief For every little infant grief!

What was my joy, what was my pride, I mind when prattling by thy side ; When oft thy feeble arms would stretch, To pick the flowers above my reach.

No wants from thee did I conceal ; I sought thine house at every meal; Though e'er so little thine might be, A bit was always saved for me.

When stretch'd upon the bed of death, I heard thee speak with fait'ring breath; Though thy departure was so near, I was the object of thy care.

And when the vital spark was fled, I fondly climb'd beside the bed ; Not knowing then what death could mean, I kissed thee o'er and o'er again ; But seem'd affronted in my mind, Thinking that thou welt grown unkind, And wonder'd what the cause could be That thou no kiss returned to me.

I mind When on thy burial-day, With grief I saw thee borne away ; I then was told I should not mourn, For by and by thou would'st return.

These hopes awhile did I maintain, That I should see thy face again ; And often thought how long 'mould be, Before thou would'st return to me.

High were my expectations grown, Till Reason's ght began to dawn; The fond mistake she soon remov'd, And chased the hopes I long had loy'd.

These thoughts renew'd create a sigh, And I with nature will comply ; The tears which now fast fall can prove, That I remember still thy love.

Oh, yes ! perhaps to thee 'tis known, How oft I've sat and wept alone; When there the artless tear might he Unseen by all save Heaven and thee.

Each word by thy fond lips express'd, Is still the treasure of my breast ; When thy remembrance, oft renew'd, Is by affection's tear bedew'd.