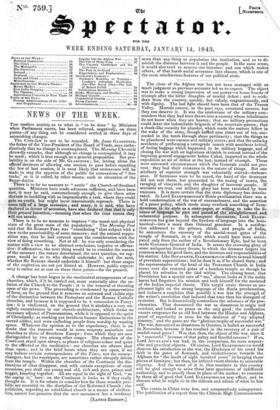 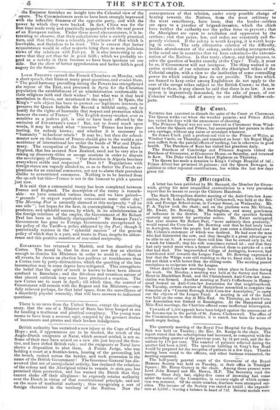 The close of the Afghan war has not been managed

with so much judgment as previous accounts led us to expect. The object was to make a strong impression of our power—a bonne bouche of triumph after the bitter draughts of mortal defeat ; and to with- draw from the country, quickly, but calmly, magnanimously, and with dignity. The last fight should have been that of the Tezeen Valley. Mortals cannot, as the poet says, command success, but they can deserve it. It was the misfortune of the military com- manders that they had been drawn into a country whose inhabitants do not know when they are beaten ; that no military precautions could deter the indomitable brigands of the mountain-passes ; that a shark-like voracity for plunder, which made the natives follow in the wake of the army, though baffled nine times out of ten, suc- ceeded in the tenth through sheer pertinacity; that the things to be plundered were cannon and military stores ; and that the unlucky accidents of performing a retrograde march with assailants behind, of losing baggage which happened to be military baggage, and of closing the war with an inglorious skirmish in retreat instead of the imposing general engagement before Cabal, imparted to the whole expedition an air of defeat at the last, instead of triumph. These were untoward circumstances which the Generals could not pre- vent : they had their existence in the nature of things. But one attribute of superior strength was voluntarily waived—forbear. ance. If fortresses were to be razed, the hand of the destroyer did not rest there, but proceeded to the razing of towns, the ravaging of vineyards, and the slaughter of innocent people. If accounts are true, our military glory has been tarnished by base excesses. It is more certain that the state diplomacy has deterio- rated. In Lord ELLENBOROUGH'S Simla proclamation there was a bold condemnation of the war of encroachment, and the assertion of a peace policy, which made many overlook something of 'ken- tiousness in its style as a state-paper, or willing to take the 11 cence of language as part and parcel of the straightforward and. substantial purpose. In subsequent documents, Lord ELLEN-. BOROUGH has gone beyond the freedom of language into the bom- bastical—into a more than Oriental grandeur. In a notifica- tion addressed to the princes, chiefs, and people of India, he announces the recovery of the sandal-wood gates of the temple of Somnath, in a style which would have been antici- pated only from the author of a Revolutionary Epic, had he been, made Governor-General of India. It seems the crowning glory of some antiquarian literary dream, in which the dreamer forgets his common sense, his good taste, and the decorum and responsibilities of his station. Like BONAPARTE, ELLENBOROUGH affects to avail himself of prevalent superstitions ; but he does it as if he shared them ; and the representative of the head of the Protestant Church in India crows over the restored gates of a heathen temple as though he placed his salvation in the idol within. The closing boast, that Providence has a special care of " me," almost looks as if the noble baron had forgotten his mission and took himself for the anointed of the Indian imperial throne. This turgid strain throws an un- pleasant light on the strong language of the Simla proclamation, and -induces a suspicion that possibly it was less the strength of the writer's conviction that induced that tone than his disregard of restraint. But it diametrically contradicts the substance of the pro clamation. That denounced the war as disastrous in origin and conduct, and looked to peace as the only good: the notification vaunts vengeance for an old feud between the Hindus and Afghans, proof of superiority in arms for the denizens of " my adopted country," and the gates are the " glorious trophy of successful war." The war, denounced as disastrous in October, is hailed as successful in November, because it has resulted in the recovery of a pair of sandal-wood gates ! Was that, then, the object of the war, since it is "successful" because of that paltry and fanciful success ? If so,

Lord AUCKLAND'S war had, in the comparison, far more respect-

able and practical objects. Of course, Lord ELLENBOROUGH would disavow his satisfaction at the war, the Hinduism of his creed his

faith in the gates of Somnath, and vindictiveness towards the Afghans for " the insult of eight hundred years" in keeping those pieces of furniture ; but then, his inflated vaunt shrinks to miserable claptrap. And the worst of it is, that numbers in this country will be glad enough to seize these later specimens of indifferent authorship, and to crucify them in place of the author; to construe

by them all of good that Lord ELLENBOROUGH may effect, and to obscure what he might do in the ridicule and odium of what he has said.

The events in China were few, and comparatively unimportant. The publication of a report from the Chinese High Commissioners • the Emperor furnishes an insight into the Celestial view of the ' _repute. The Commissioners seem to have been strongly impressed with the inflexible firmness of the opposite party, and with the power by which they were backed. In fact, China was for the Bret time made truly and practically acquainted with the real power of an European nation. Under these novel circumstances, it is in- teresting to observe, that their calculations take a strictly practical turn, and that they form a tolerably just estimate of that which is inevitable, and therefore to be done. This is earnest that better acquaintance would in other respects bring them to more judicious views of the relations with Europe. It is also interesting to ob- serve that they act thus far in good faith ; which we probably re- gard as a novelty in them because we have been ignorant on our side. But the show of better apprehension and better faith is good augury for the future.