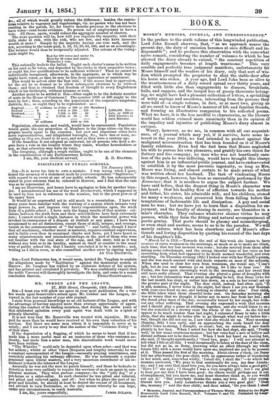 MR. COBDEN AND THE LEAGUE.

Sra—I trust you will allow me space in your next publication for a very few words upon Somerville's attack upon Mr. Cobden and the League, re- viewed in the last number of your able journal. I state from personal knowledge as an old lecturer of the 'League, and with the advantage of having enjoyed more than average opportumty of appre- ciating the conduct of its leading members, that during the seven years of that celebrated agitation every paid agent was dealt with in a spirit of princely liberality.

It is not true that Mr. Somerville was treated with injustice. He was paid far more than he would have received at his own then valuation of his services. But there are -some men whom it is impossible to serve or to satisfy ; and I am sorry to say that the author of the "Cobdenic Policy" is of that class.

If the degradation of a flogging, of which he seems to boast that it has made him a more useful man as an instructor of those who contemn au- thority, had made him a sober man, this discreditable work would never have been written.

"The Whistler " could only be depended upon when sober—and that was but seldom ; whilst at other times (frequent and lengthy intervals) he was a constant correspondent of the League—earnestly praying remittances, and contritely admitting his unhappy affliction. He was notoriously a regular Pensioner upon liberal masters, and a very uncertain contributor of his in- stalment towards the labours of the League.

Assuredly he was not the man he paints himself; and those he bedaubs to distortion were very unlikely to require the services of such an agent in con- fidential matters. They were parlour company—he the "jolly dog" of a pot-house or a cider-cellar. In such character he was pitied and relieved, and pitied and relieved again, and oft : but when he plays the part of in- grate and fabulist, he should at least be denied the excuse of ill-treatment, and advised to turn Teetotaller, as the only means whereby he can hope, under any circumstances, to reach Australia.