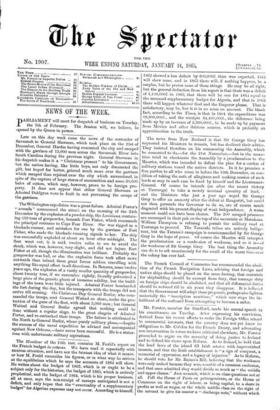 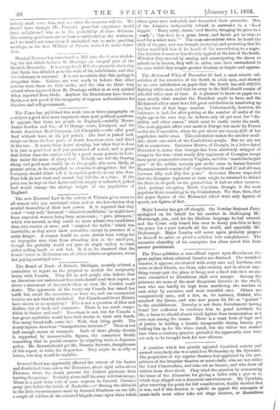 Mr. Forster, member for Bradford, made his annual speech to

his constituents on Tuesday. After expressing his conviction, derived from his recent efforts to make the Foreign Office attend to commercial interests, that the country does not yet know its obligations to Mr. Cobden for the French Treaty, and advocating non-intervention in terms we have criticized elsewhere, Mr. Forster proceeded to argue on the necessity of doing justice to Ireland and to defend his views upon Reform. As to Ireland, he held that the land laws of the island fill Irish estates with impoverished tenants, and that the Irish establishment is "a sign of conquest, a memorial of oppression, and a legacy of injustice." As to Reform,- he should vote for Mr. Baines's Bill, believing that the workmen were only united because they were sensible of a common exclusion, and that once admitted they would divide as much as "the middle and upper classes." Just so much, which is on class questions not at all. Poll the House of Peers on primogeniture, or the House of Commons on the right of labour, as being capital, to a share in profits as well as wages, or the whole middle class on the right of the servant to give his master a "discharge note," without which

nobody shall serve hiva, and se 3 what the response will be. We should have thought Mr. Forster's game-law experience would have enlightened him as to the probability of class divisions. The country gentlemen are at least as cultivated as the workman, and we would not trust theta if unchecked not to make poaching sacrilege, as the first William of Prussia wantcl to make deser- tion.