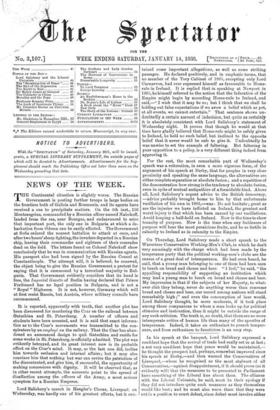 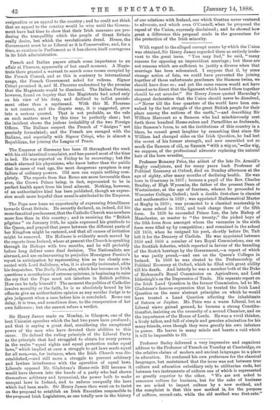 Page 1, 14 January 1888 — In his speech at the banquet, Lord Salisbury expressed a
Close

In his speech at the banquet, Lord Salisbury expressed a

confident hope that the revival of trade had really set in at last ; a not very confident hope that peace would be maintained,— he thought the prospect had, perhaps, somewhat improved since his speech at Derby,—and then warned the Conservatives of Liverpool,—whom he recognised as the most stalwart of all Conservatives,—against disappointment, if it should prove (as it evidently will) that the measures to be presented to Parliament have something of the Liberal hue about them. The alliance with the Liberal Unionists, he said, must be their apology if they did not introduce quite such measures as they themselves would like best ; and he must also warn them that they were not in a position to court defeat, since defeat must involve either

resignation or an appeal to the country ; and he could not think that an appeal to the country would be wise until the Govern- ment have had time to show that their Irish measures are pro- ducing the tranquillity which the people of Great Britain really desire, but which the revolutionists dread. Hence, the Government must be as Liberal as it is Conservative, and, for a time, as cautious in Parliament as it has shown itself courageous in its Irish administration.