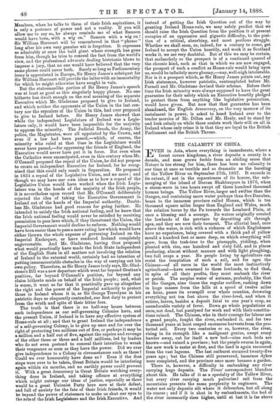 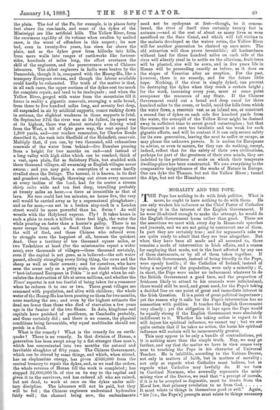 THE CALAMITY IN CHINA. E VEN in Asia, where everything is

What is the remedy ? What is the remedy for an earth- quake? There is no remedy. In that division of Honan, a generation has been swept away by a fiat stronger than man's, which has concentrated into two months the natural and inevitable slaughter of fifty years. The Chinese Government, which can be stirred by some things, and which, when stirred, has an elephantine energy, has given £500,000 from the central treasury to repair the dykes, and, as we read the orders, the whole revenue of Honan till the work is completed ; has stopped 32,000,000 lb. of rice on its way to the capital and given it to the survivors, and has ordered all who are ruined, but not dead, to work at once on the dykes under mili- tary discipline. The labourers will not be paid, but they will be fed ; the Chinese engineers understand hydraulics fairly well ; the channel being new, the embankments

need not be cyclopean at first—though, be it remem- bered, the river of itself rises certainly twenty feet in autumn ;—and at the cost of about as many lives as were sacrificed on the Suez Canal, and which will fall victims to the malaria developed as the waters retire, the Yellow River will for another generation be chained up once more. The old attraction will then prove irresistible ; all husbandmen without land for three hundred miles on each side of the river will silently steal in to settle on the alluvium, fruit-trees will be planted, rice will be sown, and in five years life in Honan will be proceeding exactly as before, as it does on the elopes of Vesuvius after an eruption. For the past, however, there is no remedy, and for the future little hope. Nothing, if the river is simply dyked, can prevent its destroying the dykes when they reach a certain height ; for the work, increasing every year, must at some point overpower the resources of any State. If the Chinese Government could cut a broad and deep canal for three hundred miles to the ocean, or build, amid the hills from which the water flows, a reservoir vast as an inland sea, or construct a second line of dykes on each side five hundred yards from the water, the overspill of the Yellow River might be drained away in sufficient time to arrest grand catastrophes ; but that Government is at once too fatalistic and too weak for such gigantic efforts, and will be content if it can only secure safety for its own generation, leaving the next to suffer or escape, as may please the unknown powers. It is useless for Europeans to advise, or even to mourn, for they can do nothing, except, indeed, reflect that for the safety of their own civilisations, perhaps for part of the greatness of their own minds, they are indebted to the pettiness of scale on which their temperate dwelling-place has been constructed. We owe everything to the comparative insignificance of the works of Nature in Europe. One can dyke the Thames, but not the Yellow River ; tunnel the Alps, but not the Himalayas.