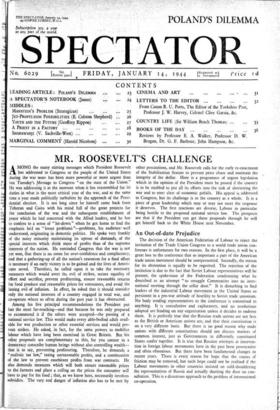 The decision of the American Federation of Labour to reject the invitation of the Trade Union Congress to a world trade union con- ference is unfortunate for two reasons. In the first place, it will be a great loss to the conference that so important a part of the American trade union movement should be unrepresented. Secondly, the reason for its abstention is equally to be regretted. The rejection of the invitation is due to the fact that Soviet Labour representatives will be present, the spokesman of the Federation condemning what he described as an attempt " to smuggle Communists into an inter- national meeting through the cellar door." It is disturbing to find leaders of the industrial Labour movement in the United States so persistent in a pre-war attitude of hostility to Soviet trade unionism. No body sending representatives to the conference is committed to anything. It is consultative and exploratory, and no resolutions adopted are binding on any organisation unless it decides to endorse them. It is perfectly true that the Russian trade unions are not free as the British or American unions are, and that their constitution is on a very different basis. But there is no good reason why trade unions with different constitutions should not discuss matters of common interest, just as Governments in differently constituted States confer together. It is true that Russian attempts at interven- tion in foreign labour movements have in the past been provocative and often obnoxious. But there have been fundamental changes in recent years. There is every reason for hope that the causes of friction may be removed, but such hope could not be realised if the Labour movements in other countries insisted on cold-shouldering the representatives of Russia and actually shutting the door on con- sultation. This is a disastrous approach to the problem of international. co-operation.