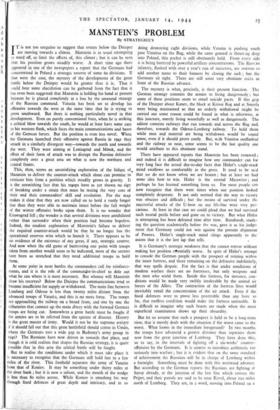 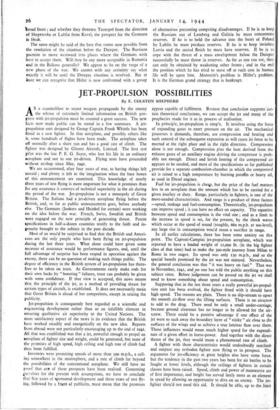 IT is not too sanguine to suggest that events below the Dnieper are moving towards a climax. Manstein is as usual attempting to ward off, or limit the effects of, this climax ; but it can be seen that his position grows steadily worse. A short time ago there appeared in one of the newspapers a report that the Germans had concentrated in Poland a strategic reserve of some 6o divisions. If that were the case, the mystery of the development of the great battle below the Dnieper would be greater than it is. That it could bear some elucidation can be gathered from the fact that it has even been suggested that Manstein is holding his hand at present because he is placed completely at a loss by the unsound strategy of the Russian command. Vatutin has been set to develop his offensive towards the west at the same time that he is trying to press southward. But there is nothing particularly novel in that development. Even on purely conventional lines, when he is striking a critical blow towards the south, he would at least have some care to his western flank, which faces the main communications and bases of the German forces. But the position is even less novel. When the Germans launched their offensive against Russia in 1941 they struck in a similarly divergent way—towards the north and towards the west. They were aiming at Leningrad and Minsk, and the effect of their form of attack was to disrupt the Russian defensive completely over a great area on what is now the northern and central fronts.

This, then, seems an unsatisfying explanation of the failure of, Manstein to deliver the counter-attack which alone, can promise to extricate him from a position which steadily grows in gravity. It is the astonishing fact that his troops have as yet shown no sign of breaking under a strain that must be testing the very core of their and their commanders' skill and resolution. For the map makes it clear that they are now called on to hold a vastly longer line than they were able to maintain intact before the full weight of the winter offensive broke upon them. It is no wonder that Kirovograd fell ; the wonder is that several divisions were annihilated rather than surrender when their position had become hopeless. Indeed, the readiest explanation of Manstein's failure to deliver the required counter-attack would be that he no longer has the operational reserves with which to launch it. There appears to be no evidence of the existence of any great, if any, strategic reserve. And now when the old game of buttressing one point with troops taken from another would seem to be indicated, most of the sectors have been so stretched that they need additional troops to hold them.

At some point in most battles the commanders call for reinforce- ments, and it is the role, of the commander-in-chief to dole out what he can where it is most necessary. But whence will Manstein draw his reserves? Below the Dnieper the communications tend to become insufficient for supply or withdrawal. The main line between Lemberg and Odessa is less than twenty miles distant from the advanced troops of Vatutin, and this- is no mere foray. The troops are approaching the railway on a broad front, and one by one the tributaries that connect up the main al-Eery with the forward German troops are being cut. Somewhere a great battle must be fought if the armies are to be relieved from the spectre of disaster. History is the great master of irony. Would it not be the supreme artistry if it should fall out that this great battlefield should centre in Uman, where the Germans tore a wide gap in Budenny's army group in top? The Russians have now driven in towards that place, and though it is cold realism that shapes the Russian strategy, it is quite possible that in this area the critical battle will be fought.

But to realise the conditions under which it must take place it is necessary to recognise that the Germans, still hold fast to a few miles of the river. This foothold separates the army of Vatutin from that of Koniev. It may be something under thirty miles at the river bank ; but it is now a salient, and the mouth of the wedge

less than So miles across. While Koniev is smashing his way through fixed defences of great depth and intricacy, and in so doing destroying eight divisions, while Vatutin is pushing south past Vinnitsa on the Bug, while the same general is thrust ng deep into Poland, this pocket is still obstinately held. From every side it is being battered by powerful artillery concentrations. The Russ:an infantry, flushed with over a year's run of successes, are anxious to add another name to their banners by closing the sack ; but the Germans sit tight. There are still some very obstinate rocks in front of the Russian advance.

The mystery is what, precisely, is their present function. The Qerman strategy commits the armies to living dangerously ; but some of these positions seem to entail suicide pacts. If this grip of the Dnieper about Kanev, the block at Krivoi Rog and at Smyela were being maintained so that an orderly withdrawal might be carried out some reason could be found in what is otherwise, at this juncture, merely living wastefully as well as dangerously. The salient contains railways that run towards and across the Bug and, therefore, towards the Odessa-Lemberg' railway. To hold them while men and material are being withdrawn would be sound sense, even if it should prove costly. But, with Vinnitsa outflanked and the railway so near, sense seems to be the last quality one would attribute to this obstinate stand.

There have appeared reports that Manstein has been removed ; and indeed it is difficult to imagine how any commander can for very long face the actual day-to-day facts that Hitler's single-track mind swallows so comfortably in the gross. It used to be said that we do not know when we are beaten ; but at least we had some idea how to win. Hitler is the eternal Micawber ; and perhaps he has learned something from us. For most people can now recognise that there were times when our position looked completely desperate. It not only seemed that the way to victory was obscure and difficult ; but the means of survival under the successful attacks of. the U-boat on our life-line were very pre- carious. At least in that case we could plead that we had survived such mortal perils before and gone on to victory. But what Hitler is attempting has been defeated time after time. Rundstcdt, study- ing the question academically before the war, gave it as his judge- ment that Germany could not win against the present alignment . of Powers. Hider's single-track mind clings apparently to the axiom that it is the last lap that tells.

It is Germany's strategic weakness that she cannot retreat without making her position estentially worse. In spite of Hitler's attempt to console the German people with the prospect of retiring within the inner fortress, and there remaining on the defensive indefinitely, that way spells despair. For the fact is that under conditions of modern warfare there are no fortresses, but only weapons and the men who wield them. Inside this fortress, for instance, con- ditions would be made very swiftly intolerable by the united air forces of the Allies. The contraction of the fortress lines would inevitably entail the concentration of the air attack. Even if the fixed defences were to prove less penetrable than any have so far, that roofless condition would make the fortress untenable. It is difficult to imagine why such boasts are made when the most superficial examination shows up their absurdity.

But let us assume that such a prospect is held to be a long-term view, that it merely deals with the situation if the worst came to the worst. What looms in the immediate foreground? In two months the troops have advanced a greater distance than separates them now from the great junction of Lemberg. They have done this, so to say, in the intervals of fighting off a six-weeks' counter- offensive by the Germans. It is unwise to introduce arithmetic too seriously into warfare ; but it is evident that on the same standard - of achievement the Russians will be in charge of Lemberg within a fortnight. Something must be done with this westward advance. But according to the German reports the Russians arc fighting at Sarny already, at the junction of the last line which crosses the Pripet, and their patrols are said to be near Kovel, about roo miles north of Lemberg. They are, in a word, moving into Poland on a goad front ; and whether they threaten Tarnopol from the direction of Shepetovka or Lublin from Kovel, the prospect for the Germans is bleak.

The same might be said of the best that seems now possible from the resolution of the situation below the Dnieper. The Russians promise to move westward into places where the Germans wish least to accept them. Will they be any more acceptable in Rumania and in the Balkans generally? We appear to be on the verge of a new phase of the war. We cannot with any certainty say what exactly it can be until the Dnieper situation is resolved. But at least we can recognise that Hitler is now confronted with a group of alternatives presenting competing disadvantages. If he is to keep the Russians out of Lemberg and Galicia he must concentrate reserves. If he is to hold the advance into the heart of Poland by Lublin he must prcduce reserves. If he is to keep inviolate Latvia and the sacred Reich he must have reserves. If he is to cope with the threat of a mass envelopment below the Dnieper successfully he must throw in reserves. As far as one can see, they can only be obtained by weakening other fronts ; -and in the end the position which he has tried to stave off at such cost in human life will be upon him. Manstein's problem is Hitler's problem. It is the German grand strategy that is bankrupt. -