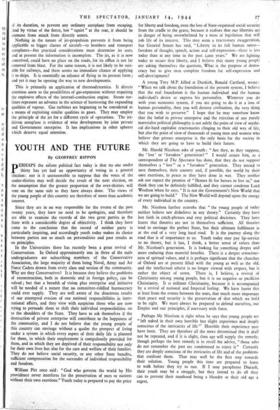 PERHAPS the salient political fact today is that no one under thirty has yet had an opportunity of voting in a general election : nor is it unreasonable to suppose that the votes of the under-thirties may well decide the result of the next election, on the assumption that the greater proportion of the over-thirties will vote on the same side as they have always done. The views of the young people of this country are therefore of more than academic interest.

Since they are in no way responsible for the events of the past twenty years, they have no need to be apologists, and therefore are able to examine the records of the two great parties in the State with a considerable degree of objectivity. I think they have come to the conclusion that the record of neither party is particularly inspiring, and accordingly youth today makes its choice between parties not so much on personalities and past results as on principles.

In the Universities there has recently been a great revival of Conservatism. In Oxford approximately one in three of the male undergraduates are subscribing members of the Conservative Association, the large majority of them being Naval, Army and Air Force Cadets drawn from every class and section of the community. Why are they Conservatives? It is because they believe the problems of reconstruction, both in domestic and in foreign policy, can be solved ; but that a breadth of vision plus enterprise and initiative will be needed of a nature that no committee-riddled bureaucracy could ever supply. They are well aware of the disastrous results of our attempted evasion of our national responsibilities in inter- national affairs, and they view with suspicion those who are now trying to persuade them to shift their individual responsibilities on to the shoulders of the State. They have to ask themselves if the destruction of private enterprise will contribute to the happiness of the community, and I do not believe that the young people of this country can envisage without a qualm the prospect of living under a system in which every aspect of their daily life is planned for them, in which their employment is compulsorily provided for them, and in which they are deprived of their responsibility not only for their own lives but also for the care and welfare of their families. They do not believe social security, or any other State benefits, sufficient compensation for the surrender of individual responsibility and freedom.

William Pitt once said : " God who governs the world by His providence never interferes for the preservation of men or nations without their own exertions." Youth today is prepared to pay the price

for liberty and freedom, even the loss of State-organised social security from the cradle to the grave, because it realises that -our liberties are in. danger of being overwhelmed by a mass of legislation that will rob life of its interest. This may seem a reactionary exaggeration, but General Smuts has said, " Liberty in its full human sense— freedom of thought, speech, action and self-expression—there is less today than at any time in the past 2,000 years." We are fighting today to secure that liberty, and I believe that many young people are asking themselves the question, What is the purpose of demo- cracy but to give men complete freedom for self-expression and self-development?

A young Tory M.P. killed at Dunkirk, Ronald Outland, wrote : " When we talk about the foundation of the present system, I believe that the real foundation is the human individual and the human individual's desire to express his personality. Whatever you do with your economic system, if you are going to do it at a loss of human personality, then you will destroy civilisation, the very thing that you wish to preserve." I hope that he may somehow know that the belief in private enterprise and the rejection of any purely materialist political philosophy is not solely the point of view of mythi- cal die-hard capitalist reactionaries clinging to their old way of life, but also the point of view of thousands of young men and women who believe that private enterprise is the only basis for the society in which they are going to have to build their future.

Mr. Harold Nicolson asks of youth : " Are they, as they suppose, the ' lost' or forsaken' generation? " I would assure him, as a correspondent of The Spectator has done, that they do not suppose themselves a " lost " or a " forsaken " generation. They intend to save themselves, their country and, if possible, the world by their own exertions, in peace as they have done in war. They neither ask nor expect the promise of " Homes fit for heroes to live in," nor think they can be definitely fulfilled, and they cannot condemn Lord. Woolton When he says, " It is not the Government's New World that we are going to build." The New World will depend upon the energy of every individual in the country.

Mr. Nicolson further remarks that " the young people of today neither believe nor, disbelieve in any theory." Certainly they have lost faith in catch-phrases and easy political doctrines. They have learnt that theories are not in themselves sufficient. All theories tend to envisage the perfect State, but their ultimate fulfilment is at the end of a very long hard road. It is the journey along the road that is of importance to us. Youth today may pay lip-service to no theory, but it has, I think, a better sense of values than Mr. Nicolson's generation. It is looking for.something deeper and more enduring than material benefits. There is a deeper conscious- ness of spirtual values, and it is perhaps significant that the churches of Oxford are at present filled with the young as well as the old, and the intellectual atheist is no longer viewed with respect, but is rather the object of scorn. There is, I believe, a revival of Christianity among young people, but it is no negative or pacificist Christianity. It is militant Christianity, because it is accompanied by a revival of national and Imperial feeling. We have learnt this at least from the events between the wars, that much more important than, peace and security is the preservation of that which we hold to be right. We must always be prepared to defend ourselves, our Empire and our principles, if necessary with force.

Perhaps Mr Nicolson is right when he says that young people are " left naked in their own horrible but slight experience and deeply conscious of the intricacies of life."' Horrible their experience may have been. They are therefore all the more determined that it shall not be repeated, and if it is slight, then age will supply the remedy, though perhaps the best remedy is to recall the advice, " those who do not remember the past are condemned to reject it." Certainly they are deeply conscious of the intricacies of life and of the problems that confront them. That may well be the first step towards their solution. Young people this time are prepared to learn to walk before they try to run. If I may paraphrase Disraeli, their youth may bd a struggle, but they intend to do all they can to prevent their manhood being a blunder or their old age a regret.