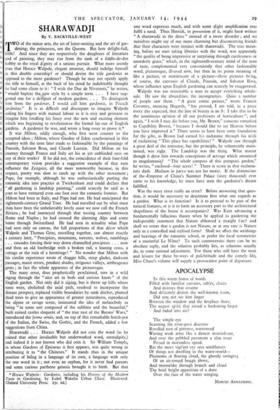 TWO of the minor arts, the art of letter-writing and the art of gar- dening; the princesses, not the Queens. But how delight-full, Kith! And since they are respectively the daughters of literature and of painting, they may rise from the rank of a fiddle-de-dee hobby to the royal dignity of a serious pursuit. What more seemly than that Horace Walpole, elegant amateur, should indulge himself in this double courtship? or should devise the title gardenist as opposed to the mere gardener? Though he may not openly apply the title to himself, at the back of his mind he indubitably thought he had some claim to it : " I wish the Duc de Nivernois," he writes, " would baptize the ,pew style by a simple term. . . . I have sug- gested one for a designer of modern gardens. . . . To distinguish him from the gardener, I would call him gardenist, in French jardiniste." It is as difficult and discrepant to imagine Walpole soiling his fingers with manual labour as it is easy and germane to imagine him fondling his fancy over the new and exciting element which was beginning to revolutionise the formal lay-out of English gardens. A gardenist he was, and wrote a long essay to prove it.* It was Milton, oddly enough, who first went counter to the accepted ideas ; Milton, whose Garden of Eden synchronised in this country with the taste later made so fashionable by the paintings of Poussin, Salvator Rosa, and Claude Lorrain. Did Milton on his journey through France and Italy set .his as yet unblinded eyes on any oL their works? If he did not, the coincidence of their four-fold contemporary vision provides a suggestive example of that rum influence the Zeitgeist, all the more noteworthy because, in this respect, poetry was slow to catch up with the other movement ; Pope, for example, although he was enthusiastically putting the romantic idea into practice at Twickenham and could declare that " all gardening is landskip painting," could scarcely be said as a poet to have ventured even one foot over the romantic frontier. But Milton had been to Italy, and Pope had not. He had anticipated the eighteenth-century Grand Tour. He had travelled out by what must then have been the unbelievably lovely coast we now call the French Riviera ; he had journeyed through that tossing country between Rome and Naples ; he had crossed the alarming Alps and come home through Switzerland. He had seen in actuality what Pope had seen only on canvas, the full proportions of that decor which Walpole and Thomas Gray, travelling together, saw almost exactly a century later, " Precipices, mountains, torrents, wolves, rumblings . . . cascades forcing their way down channelled precipices . . . now and then an old footbridge with a broken rail, a leaning cross, a cottage or the ruin of a hermitage! " No wonder that Milton with his similar experience wrote of shaggie hills, steep glades, darksom passages, mazie errors, pendant shades, irriguous valleys, umbrageous grots ; in fact the whole apparatus of the picturesque.

The mazy error, thus prophetically proclaimed, tore in a wild zigzag through the " nice art in beds and curious knots " of the English garden. Not only did it zigzag, but it threw up hills where none were, abolished the axial path, resolved to incorporate the distant prospect, replaced visible boundaries by sunk ditches, planted dead trees to give an appearance of greater naturalness, reproduced the alpine or savage scene, insinuated the idea of melancholy as being "in some sort composed of the sublime and the beautiful," built ruined castles eloquent of " the true rust of the Barons' Wars," introduced the ferme ornje, and, on top of this remarkable hotch-pot of the Italian, the Swiss, the Gothic, and the French, added a few suggestions from China.

Sharawadji . . . Horace Walpole did not coin the word (as he coined that other invaluable but underworked word, serendipity,) and indeed it is not known who did coin it. Sir William Temple, in whose Gardens of Epicurus it first appears, was quite wrong in attributing it to " the Chineses." It stands thus in the unique position of being in a language of its own, a language with only the one word in it ; not even an orphan, for it never had parents and some curious partheno genesis brought it to birth. But that * Horace Walpole: Gardenist, including his History of the Modern Taste in Gardening, by Isabel Wakelin Urban Chase. Illustrated. (Oxford Univeriity Press. 23s. 6d.) one word expresses much, and with soak slight amplification may fulfil a need. Thus Herrick, in possession of it, might have written " A sharawadji in the dress " insiead of a sweet disorder ; and we ourselves might say of our more charming but disconcerting friends that their characters were instinct with sharawadji. The true mean- ing, before we start taking liberties with the word, was apparently " the quality of being impressive or surprising through carelessness or unorderly grace," which, in the eighteenth-century mind of the man of taste, complemented very conveniently that other fashionable word, picturesque, ill-used now, but then in its prime meaning of like a picture, or reminiscent of a picture—these pictures being, of course, the canvases of Claude, Poussin, and Salvator Rosa, whose influence upon English gardening can scarcely be exaggerated.

Walpole was too reasonable a man to accept everything whole- sale. He saw the absurdities, the incongruities. Quite a number of people saw them. " A great comic painter," wrote Francis Coventry, meaning Hogarth, " has proved, I am told, in a piece every day expected, that the line of beauty is an S : I take this to be the unanimous opinion of all our professors of horticulture"; and again, " I wish I may die before you, Mr. Brown," someone remarked to Capability Brown, " because I should like to see Heaven before you have improved it." There seems to have been some foundation for the gibe, as Brown had earned his nickname through his trick of exclaiming "This place has capabilities! " Walpole saw through a great deal of the nonsense, but the principle, he vehemently main- tained, was right. The Landskip was the thing. What matter though it drew him towards conceptions of acreage which amounted to megalomania? " The whole compass of this pompous garden," he writes, " enclosed—four acres! " There is scorn in that exclama- tory dash. Multum in parvo was not his motto. If the dimensions of the .Emperor of China's Summer Palace (sixty thousand) ever came to his knowledge, he must have seen the gardenist's dream fulfilled.

Was the mazy error really an error? Before answering that ques- tion, it would be necessary to determine first what one regards as a garden. What is its function? Is it to pretend to be part of the natural features, or is it to form an accessory part to the architectural shapeliness of the house it accompanies? Was Kent advancing a fundamentally fallacious theory when he applied to gardening the indisputable statement that Nature abhorred a straight l'ne? and shall we retort that a garden is not Nature, or at any rate is Nature only in a controlled and stylised form? Shall we affect the writhings and heavings of the romantic school, or prefer the focal symmetries of a masterful Le Notre? To such controversies there can be no absolute reply, and the solution probably lies, as solutions usually do, in some rational adjustment. Tor those who still have the taste and leisure for these by-ways of pulchritude and the comely life, Miss Chase's volume will supply a provocative point of departure.