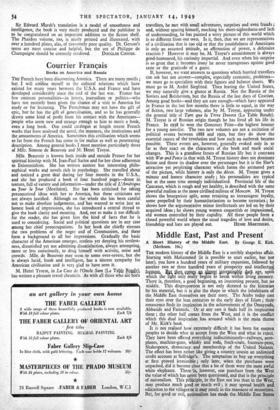 Books on America and Russia THE French have been discovering America. There are many motifs ; but I will confine myself to the cultural relations which have existed for many years between the U.S.A. and France and have developed considerably since the end of the last war. France has few eminent personalities—in letters, journalism or politics—who have not recently been given the chance of a visit to America for study or for lecturing. The Frenchman may not have the gift of epic, but he has the gift of generalisation, and so he has generally drawn some kind of profit from his contact with the Americans—

• people who seem new and strange enough to him to merit a book, even a long book. One could catalogue at length recent French works that have analysed the novel, the manners, the institutions and the amusements of America. Sometimes this civilisation which seems so far from the French has come in for malice as well as penetrating description. Among general books I must mention particularly those of Mlle. Simone de Beauvoir and M: Henri Troyat.

Mlle. Beauvoir is known both inside and outside France for her spiritual kinship with M. Jean-Paul Sartre and for her close adherence to Existentialism. She has written austere but interesting philo- sophical works and novels rich in psychology. She travelled about and noticed a great deal during her four months in the U.S.A., and she has produced a book of four hundred pages—dense in texture, full of variety and information—under the title of L'Amerique au Jour le Jour (Moriheen). She has been criticised for taking preconceived ideas with her to America, but these criticisms are not always justified. Although on the whole she has been careful not to make absolute judgements, and has wanted to write just an honest book of impressions, she has introduced a central thread to give the book clarity and meaning. And, not to make it too difficult for the reader, she has given him the kind of facts that he is used to considering. Social and political questions are in any case among her chief preoccupations. In her book she chiefly stresses the two problems of the negro and of Communism, and these form a background to all her impressions. Gradually the basic character of the American emerges, restless yet denying his restless- ness, dissatisfied yet not admitting dissatisfaction, always attempting, more or less consciously, to drug himself with activity, noise and crowds. Mlle. de Beauvoir may seem to some over-severe, but she is always lucid, frank and intelligent, has a sincere sympathy for American civilisation and is very glad to have seen it.

M. Henri Troyat, in La Case de l'Oncle Sam (La Talkie Roe,has written a pleasant travel chronicle. As with all those who are born

travellers, he met with small adventures, surprises and even frauds ; and, without sparing himself, mocking his short-sightedness-and lack of understanding, he has painted a witty picture of this world which is so different from our own. Is it, then, that we are representatives of a civilisation that is too old or that the youthfulness of Americans is only an assumed attitude, an affirmation of power, a defensive reaction ? However it may be, M. Troyat's astonishment is always good-humoured, his curiosity impartial. And even when his surprise is so great that it becomes irony he never transgresses against good taste or the gratitude of a guest.

If, however, we want answers to questions which hurried travellers can ask but not answer—complex, especially economic, problems— we must go to specialists with their figures and balance sheets. We must go to M. Andre Siegfried. Then leaving the United States, we may naturally give a glance at Russia. Not the Russia of the Soviets and Bolshevism, but the Russia of the last days of Czarism. Among good books—and they are rare enough—which have appeared in France in the last few months there is little to equal, in the way of fiction, two large volumes, also by M. Troyat, appearing under the general title of Tarn que la Terre Durera (La Table Ronde). M. Troyat is of Russian origin though he has lived all his life in France. In 1938 he won the Goncourt Prize—the highest honour for a young novelist. The two new volumes are not a recitation of political events between 1888 and 192o, but they do show the essential causes of the revolution and how such an outbreak became possible. These events are, however, generally evoked only in so far as they react on the characters of the book and mark social changes. This is a grandiose fresco of Russian life but it contrasts with War and Peace in that with M. Troyat history does not dominate fiction and throw its shadow over the personages but it is the Slav% attractive yet perplexing character which forms the animated part of the picture, while history is only the decor. M. Troyat gives a minute and honest character study ; his personalities are typical but at the same time strongly individualised. Provincial life of the Caucasus, which is rough and yet healthy, is described with the same powerful realism as the more civilised milieux of Moscow. M. Troyat shows the bourgeoisie split, some retaining an intransigent loyalty, some propelled by their humanitarianism to become terrorists ; he shows how the argumentative minor intellectuals are led on by their acquired ideas ; he shows young women coquettish or impassioned, old women controlled by their cupidity. All these people form a closed powerful world where the usual tragedies of love and desire, friendship and hate are played out. HENRI MARTINEAU.