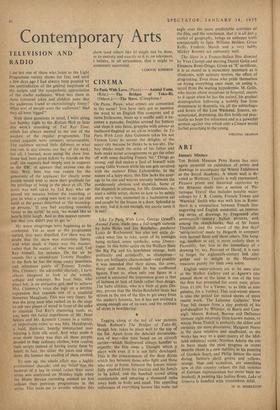 To Paris With Love. (Plaza).—Aninial Farm. (Ritz.)--The Bridges of Toko•Ri. (Odeon.)—The Slave. (Cinephone.) OH Pane, Farce, what crimes are committed in thy name! You have only got to mention the word to an English film company and it turns frolicsome, beats up a soufflé until it be- comes a pancake, fumbles around for fantasy and slaps it into farce, grapples with amour as feathered-fingered as an all-in wrestler. In To Paris With Love Alec Guinness takes his son Vernon Gray to savour the delights of the saucy city because he thinks he is too shy. The boy thinks much the same of his father and both make secret arrangements to get the other off with some dazzling French 'bit' Things go wrong, and dad makes a fool of himself with young Odile Versois while his son gets involved with the maturer Elina Labourdette. In the nature of a fairy story, this film lacks the cour- age to be one and weaves uneasily between the ponderously obvious and slapstick. Some of the slapstick is amusing, for Mr. Guinness, de- nied a subtle script. shows us how to be subtly stuck up a tree, enmeshed in a badminton net and caught by the braces in a door. Splendid in its way, but it is not enough, my sacrec tante it is not!

Like To Paris. With Love, George Orwell's Animal Farm, made into a full-length cartoon by John Halas and Joy Batchelor, producer Louis dc Rochement, has also not quite de- cided what line to take, some of its passages being stylised, some symbolic, some Disney- esque. In this bitter satire on the Welfare State the Big Pig and his henchmen emerge, both politically and artistically, as champions— they arc brilliantly characterised—and possibly

it was intended that their slaves, the cows, sheep and hens, should be but cardboard figures. Even so. when only one figure in a crowd is animated the impression given is that of laziness or lack of funds rather than design.

The baby chicken, who is a blob of pure Dis- ney. proves that the Halas-Batchelor team has striven in the rest of the film to get away from

the miter's formula, but it has not evolved a

strong enough one of its own, and the mixture of styles is bewildering.

Tagging along at the tail of war pictures Mark Robson's The Bridges of Toko-RI, though late, takes its place well to the top of the list. Apart from the detailed documenta- tion of war—this time based on an aircraft carrier—which Hollywood always handles so expertly, the film owns a Thought which it plays with even if it is not fully developed. This is the consciousness of the deep divide which lies between those who fight and those who stay at home, between the lawyer resent- fully plucked from his practice and his family to be killed, and the baseball crowd sitting comfortable and uncaring a thousand miles away both in body and mind. The appalling unfairness of everything hovers like some sad eagle over the more predictable activities of the film, and the conclusion, that it is all just a matter of geography, brings an unhappy truth unexpectedly to light. William Holden, Grace Kelly, Frederic March and a very tubby Mickey Rooney act extremely well.

The Slave is a Franco-Italian film directed by Yves Ciampi and starring Daniel Gclin and Eleanora Rossi-Drago. Given an 'X' certificate, it is as moral as a monastery inasmuch as it illustrates, with salutary terrors, the effect of drug-taking. Even those who pride themselves on trying everything once must, on seeing it, recoil from the waiting hypodermic. M. Gelin, who learns about morphine in hospital, resorts to it again when he has the cafard, his gradual disintegration following a wobbly line from dreaminess to dementia via all the subterfuges and fevers of the Lost Weekend. Sincere, un- sensational, depressing, the film holds out prac- tically no hope for reformers and is a powerful sermon against vice which only a Censor would forbid preaching to the young.