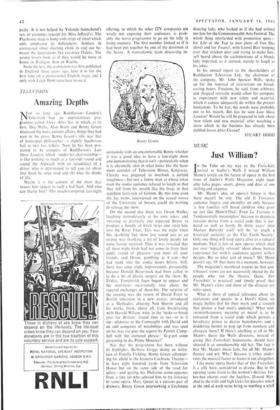 Nor so long ago Rediffusion—London's Television—had an unpretentious pro- gramme called Three After Six, in which, at its best, Dee Wells, Alan Brien and Benny Green discussed the news, current affairs, things they had seen in the press. Benny Green's role was that of homespun philosopher —a slightly lugubrious foil to two fast talkers. Now he has been pro- moted to be compere of Rediffusion's Late Show London, which---under his chairmanship— is like nothing so much as a taxi-ride round and round the Aldwych with an autodidact of a driver who is determined to tell you (a) about that book he once read and (b) what he thinks of life.

Maybe it is the content of the show that makes him appear as such a Sad Sack. And who can blame him? This much-trumpeted late-night

offering, to which the other ITV companies are wisely not exposing their audiences, is prob- ably the worst programme to go on the telly in living memory. The first number looked as if it had been put together by one of the doormen at the Savoy. A transatlantic team discussing in-

Benny Green cestuously with an uncomfortable Benny whether it was a good idea to have a late-night show and demonstrating that it isn't—particularly when it is abysmally shot in what looks like the base- ment corridor of Television House, Kingsway. Charity was prepared to overlook a certain roughness—but not a funny man at whose jokes even the studio audience refused to laugh so that they fell from his mouth like the frogs in that repellent fairy-tale of Grimm. By this time even the Jay twins, interviewed on the sexual mores of the University of Sussex, could do nothing to salvage the show.

On the second day there was Orson Welles, laughing immoderately at his own jokes, and sweating so profusely one expected Benny to produce a bundle of birch twigs and whip him into the River Fleet. This was the night when this sparkling live show lost sound just as an ex-pug was thanking a lot of lovely people for some favour received. Thus it was revealed that all these night birds had not come in from their giddy round of pleasure—you meet all your friends, said Orson, gambling at 4 a.m.—but had slunk into the studio hours before. Still, there was some slight improvement, presumably because Donald Baverstock had been called in to do a bit of plastic surgery on the show. By Friday, Tonight-ish faces began to appear and the interviews occasionally rose above the sugared exchanges of show-biz. The surprise of the evening was the return of David Frost to British television in a new avatar, introduced as a Methodist, abjuring Ned Sherrin and all his works, fresh, above all, from breakfasting with Harold Wilson, who, in the 'make-or-break year for Britain,' found time to eat—or is it sip—ulanovas at the Connaught with David and an odd congeries of notabilities and was sped on his way (so goes the report) by Patrick Camp- bell with the stuttered phrase: `G-g-got some governing to do, Prime Minister?'

Not that the programme has been without its highlights. Barbara Griggs doing an imita- tion of Fenella Fielding. Benny Green adventur- ing far afield to the Jeanetta Cochrane Theatre— at least eight hundred yards from Television House but on the same side of the road for safety—and getting his Philistine come-uppance from a tiny tot who advised him to try listening Co some opera. Mary Quant in a curious pair of drawers. Benny Green intervietving a Ceylonese

dancing lady, who looked as if she had arrived too late for the Commonwealth Arts Festival. The whole thing interlarded with promotion spots— for Life at the Top (a nice piece of free film there) and for Twang!, with Lionel Bart weeping over that stricken deer and trying to make him- self heard above the cachinnations of a blonde lady imported, as it seemed, merely to laugh at his jokes.

In his annual report to the shareholders of Rediffusion Television Ltd.. the chairman of the company, Mr. John Spencer Wills, spoke up for the removal of restrictions on broad- casting hours. Freedom, he said, from arbitrary and illogical restraint would allow his company to experiment with new talent and material, which it cannot adequately do within the present limitations. To be fair, the words were probably put in his mouth. But has he seen Late Show London? Would he still be prepared to talk about 'new talent and new material' after watching a show which in the business has already been dubbed Seven After Eleven?