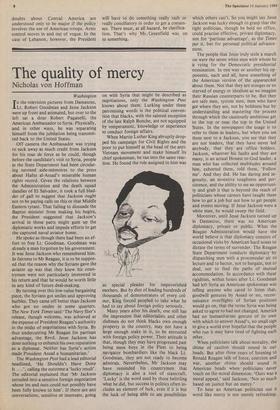 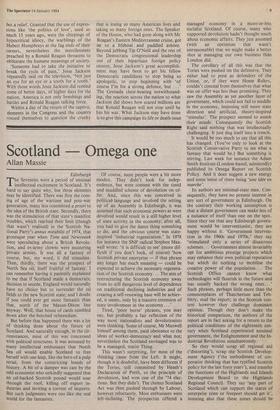 The quality of mercy

Washington yn the television pictures from Damascus, 1Lt. Robert Goodman and Jesse Jackson were up front and animated, but over to the left sat a dour Robert Paganelli, the American Ambassador to Syria. Physically, and in other ways, he was separating himself from the jubilation being transmit- ted back to the United States.

Off camera the Ambassador was trying to suck away as much credit from Jackson for his tour de force as he could, though before the candidate's visit to Syria, people in the State Department had been circulat- ing xeroxed aide-memoires to the press about Hafez al-Assad's miserable human rights record. Given the relations between the Administration and the death squad dandies of El Salvador, it took a full blad- der of gall to suggest that Jackson ought not to be paying calls on this or that Middle Eastern tyrant. That failing to dissuade the Baptist minister from making his hegira, the President suggested that Jackson's arrival in those parts might gum up the diplomatic works and impede efforts to get the captured naval aviator home.

He spoke as though there had been an ef-

fort to free Lt. Goodman. Goodman was already a man forgotten by his government. It was Jesse Jackson who remembered him. In fairness to Mr Reagan, it is to be suppos- ed that the reason why the Syrians gave the aviator up was that they knew his coun- trymen were not particularly interested in his return and that he would be worth little in any kind of future deal-making.

By turning over this low-value bargaining

piece, the Syrians got smiles and approving burbles. They came off better than Jackson who got no smiles in some quarters. The New York Times said: `The Navy flier's release, though welcome, was achieved at the expense of President Reagan's authority in the midst of negotiations with Syria. By thus undercutting Mr Reagan for partisan advantage, the Revd. Jesse Jackson has done nothing to enhance his own reputation as a diplomat. Neither has Syria's action made President Assad a humanitarian.'

headlined, 'He Shouldn't Have Done It ...', calling the outcome a 'lucky result'. The editorial explained that 'Mr Jackson intruded into a sensitive foreign negotiation whose ins and outs could not possibly have been fully known to him'. If there are any conversations, sensitive or insensate, going

on with Syria that might be described as negotiations, only the Washington Post knows about them. Lurking under these patronising words is the political conven- tion that blacks, with the sainted exception of the late Ralph Bunche, are not equipped by temperament, knowledge or experience to conduct foreign affairs.

When Martin Luther King abruptly drop- ped his campaign for Civil Rights and the poor to put himself at the head of the anti- Vietnam movement and make himself its chief spokesman, he ran into the same reac- tion. He found the role assigned to him was as special pleader for impoverished mothers. But by dint of leading hundreds of thousands of demonstrators of every col- our, King forced peopled to take what he had to say about foreign policy seriously.

Many years after his death, one still has the impression that editorialists and other clubmen do not think blacks own enough property in the country, may not have a large enough stake in it, to be entrusted with foreign policy power. Their attitude is that, though they may have progressed past being mess boys in the Fleet to being navigator bombardiers like the black Lt. Goodman, they are not ready to become admirals. Nevertheless, Mr Jackson may have reminded his countrymen that diplomacy is also a tool of statecraft. `Lucky' is the word used by those belittling what he did, but success in politics often in- cludes an element of luck, even if it is but the luck of being able to see possibilities

which others can't. So you might say Jesse Jackson was lucky enough to grasp that the right politician, though he held no office, could practise effective, private diplomacy, not for 'partisan advantage', as the Times put it, but for personal political advance- ment.

The people that Jesse truly stole a march on were the seven white men with whom he is vying for the Democratic presidential nomination, In one way or another his op- ponents, each and all, have something of the American version of the apparatchik about them. Not that they are stooges or so starved of energy or idealism as we imagine their Russian counterparts to be. But they are safe men, system men, men who have got where they are, not by boldness but by understanding and mastering the process through which the cautiously ambitious get to the top or near the top in the United States. In the newspapers the usage is to refer to them as leaders, but when you see them next to a Jackson, you see that they are not leaders, that they have never led anybody, that they are office holders. Jackson, whatever his faults and they are many, is an actual Honest to God leader, a man who has collected multitudes around him, exhorted them, told them, 'Follow me'. And they did. He has daring and in- genuity, an inventive toughness and per- sistence, and the ability to see an opportuni- ty and grab it that is beyond the reach of politicians whose careers have taught them how to get a job but not how to get people and events moving. If Jesse Jackson were a white man, he would sweep the field.

Moreover, until Jesse Jackson turned up in Damascus, there was no American diplomacy, private or public. What the Reagan Administration would have the world believe is that diplomacy consists of occasional visits by American hard noses to dictate the terms of surrender, The Reagan State Department conducts diplomacy by dispatching men with a proconsular air to lecture and to hector, not to bargain, not to deal, nor to find the paths of mutual accommodation. In accordance with these rigidities, within hours after Lt. Goodman had left Syria an American spokesman was telling anyone who cared to listen that, goodwill gestures by Assad or no, recon- naisance overflights of Syrian positions would go on, that the terms Syria was being asked to agree to had not changed. America had no humanitarian gesture of its own with which to answer Assad's, no small sign to give a world ever hopeful that the people who run it may have tired of fighting each other.

When politicians talk about morality, the chime of caution should sound in our heads. But after three years of listening to Ronald Reagan talk of force, coercion and war, another chime should sound in American heads when politicians never touch on the moral dimension. 'Ours was a moral appeal,' said Jackson, 'Not so much based on justice but on mercy.'

To hear an American politician use a word like mercy is not merely refreshing, but a relief. Granted that the use of expres- sions like 'the politics of love', used so much 15 years ago, were the chirpings of hypocritical idiocy, the warblings of the Hubert Humphreys at the fag ends of their careers, nevertheless the mercilessness Preached by a Ronald Reagan threatens to obliterate the humane meanings of society.

`Someone had to take the initiative to break the cycle of pain,' Jesse Jackson repeatedly said on the television, 'Not just an eye for an eye or a tooth for a tooth.' With those words Jesse Jackson did remind some of better days, of higher days for the nation. America is not only bombings and battles and Ronald Reagan talking force.

Within a day of the return of the captive, elements in the Congress and the country roused themselves to question the cruelty

that is losing so many American lives and taking so many foreign ones. The Speaker of the House, who had gone along with Mr Reagan's Eastern Mediterranean cruise, got on to a lifeboat and paddled ashore. Beyond jabbing Tip O'Neill and the rest of the Democratic congressional leadership out of their bipartisan foreign policy snooze, Jesse Jackson's great accomplish- ment may have been to get his fellow Democratic candidates to stop being so apologetic, to stop beginning with 'of course I'm for a strong defence, but ...' The Grenada chest-beating notwithstand- ing, the reaction across the nation to what Jackson did shows how scared millions are that Ronald Reagan will not stop until he has his war. What Jackson may have done is to give this campaign its life or death issue