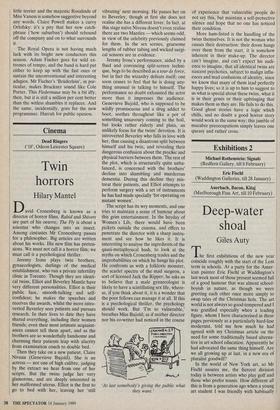 David Cronenberg is known as a director of horror films. Rabid and Shivers are part of his oeuvre; The Fly is about a scientist who changes into an insect. Among cineastes Mr Cronenberg passes for a philosopher. Big articles are written about his works. His new film has preten- sions. We must not call it a horror film; we must call it a psychological thriller.

Jeremy Irons plays twin brothers, gynaecologists, darlings of the medical establishment, who run a private infertility clinic in Toronto. Though they are identi- cal twins, Elliot and Beverley Mantle have very different personalities. Elliot is their public face, smooth-talking and self- confident; he makes the speeches and receives the awards, whilst the more intro- verted Beverley sees patients and pursues research. In their lives to date they have shared everything, including their women friends; even their most intimate acquaint- ances cannot tell them apart, and as the brothers are so wonderfully handsome and charming their patients leap with alacrity from examination couch to double bed.

Then they take on a new patient, Claire Niveau (Genevieve Bujold). She is an actress — not one of high calibre, judging by the extract we hear from one of her scripts. But the twins judge her very glamorous, and are deeply interested in her malformed uterus. Elliot is the first to go to bed with her, leaving her 'still vibrating' next morning. He passes her on to Beverley, though at first she does not realise she has a different lover. In fact, at this stage naïve Niveau doesn't even realise there are two Mantles — which seems odd, in view of the celebrity previously claimed for them. In the sex scenes, gruesome lengths of rubber tubing and wicked surgi- cal scissors are in evidence.

Jeremy Irons's performance, aided by a fluid and convincing split-screen techni- que, begs to be described as a tour de force, but in fact the wizardry defeats itself; one soon ceases to feel that he is doing any- thing unusual in talking to himself. The performance no doubt exhausted the actor more than it impresses the audience. Genevieve Bujold, who is supposed to be wildly promiscuous and a drug addict to boot, seethes throughout like a pot of something unsavoury coming to the boil, but looks rather elderly and plain, an unlikely focus for the twins' devotion. It is introverted Beverley who falls in love with her, thus causing a disastrous split between himself and his twin, and revealing their dangerous confusion about the psychic and physical barriers between them. The rest of the plot, which is structurally quite unba- lanced, is concerned with the brothers' decline into shambling and murderous dementia. During this decline they mis- treat their patients, and Elliot attempts to perform surgery with a set of instruments he has had made specially 'for operating on mutant women'.

The script has its wry moments, and one tries to maintain a sense of humour about this grim entertainment. In the heyday of Women's Lib, there would have been pickets outside the cinema, and offers to penetrate the director with a sharp instru- ment and see how he likes it. It is interesting to analyse the ingredients of the quasi-metaphysical hash, to look at the myths on which Cronenberg trades and the improbabilities on which he hangs his plot. He confronts us with a folkloric monster, the scarlet spectre of the mad surgeon, a sort of licensed Jack the Ripper; he asks us to believe that a male gynaecologist is likely to have a scintillating sex life, where- as, if you think about it, it is a wonder that the poor fellows can manage it at all. If this is a psychological thriller, the psychology should work. But 'I'm so vulnerable,' breathes Miss Bujold; as if neither director nor his co-writer had noticed in the course 'At last somebody's giving the public what they want.' of experience that vulnerable people do not say this, but maintain a self-protective silence and hope that no one has noticed their condition.

More ham-fisted is the handling of the twins themselves. It is not the woman who causes their destruction: their doom hangs over them from the start, it is somehow inherent in their make-up. The director can't imagine, and can't expect his audi- ence to imagine, that all identical twins are nascent psychotics, subject to malign influ- ences and mad confusions of identity, since we know that many of them lead perfectly happy lives; so it is up to him to suggest to us what is special about these twins, what it is in their gens or their upbringing that makes them as they are. He fails to do this. Good ghost stories have a logic which chills, and no doubt a good horror story would work in the same way; this jumble of macabre preoccupations simply leaves one queasy and rathei cross.