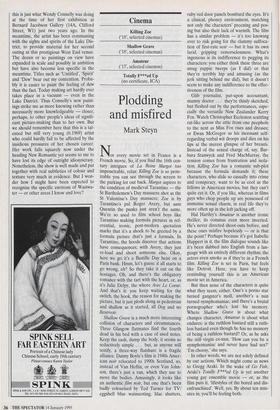 of every movie set in France is a French movie. So, if you find the 16th cen- tury intrigues of La Reine Margot too impenetrable, relax: Killing Zoe is so pene- trable you can see through the screen to the parking lot out back. Margot aspires to the condition of medieval Tarantino — the St Bartholemew's Day massacre shot as the St Valentine's Day massacre; Zoe is by Tarantino's pal Roger Avery, but sans Quentin the punks just aren't the same. We're so used to film school boys like Tarantino making formula pictures in ref- erential, ironic, post-modern quotation marks that it's a shock to be greeted by a formula picture that's just a formula. In Tarantino, the hoods discover that actions have consequences; with Avery, they just re-load and shoot someone else. Okay, here we go: it's a Bastille Day heist on a Paris bank. limm, let's guess: it all starts to go wrong, eh? So they take it out on the hostages. Oh, and there's the obligatory romance with the tart with the heart, or, as it's Julie Delpy, the whore Avec Le Coeur. And that's it: you keep waiting for the switch, the hook, the reason for making the picture, but it just plods along as pedestrian and shallow as it started, all Dog and no Reservoir.

Shallow Grave is a much more interesting collision of characters and circumstances. Three Glasgow flatmates find the fourth dead in his bed with a case of used notes. Keep the cash, dump the body, it seems so seductively simple . . . but, as anyone will testify, a three-way flatshare is a fragile alliance. Danny Boyle's film is 1940s Amer- ican noir relocated to 1990s Scotland, so, instead of Van Heflin, or even Van John- son, there's just a van, which they use to move the bodies. Amusingly, it looks like an authentic film noir, but one that's been badly colourised by Ted Turner for TV: eggshell blue wainscoting, lilac shutters, ruby red door panels bombard the eyes. It's a clinical, phoney environment, matching not only the characters' preening and pos- ing but also their lack of warmth. The film has a similar problem — it's too knowing ever to risk going for the clammy suffoca- tion of first-rate noir — but it has its own lurid, gripping remorselessness. What's ingenious is its indifference to pegging its characters: you either think these three are smug yuppie twerps (as I did) or that they're terribly hip and amusing (as the jerk sitting behind me did), but it doesn't seem to make any indifference to the effec- tiveness of the film.

Glib journalist, put-upon accountant, mumsy doctor . . . they're thinly sketched, but fleshed out by the performances, espe- cially the versatile New Zealander Kerry Fox. Watch Christopher Eccleston scuttling rat-like across the attic from one peephole to the next as Miss Fox rises and dresses; or Ewan McGregor as his incessant self- regarding verbal wit droops and dies on his lips at the merest glimpse of her breasts. Instead of the sexual charge of, say, Bar- bara Stanwyck and Fred MacMurray, the tension comes from frustration and isola- tion. Killing Zoe has a romantic sub-plot because the formula demands it; these characters, who slide so casually into crime and conspiracy, want to be as cool as the fellows in American movies, but they can't quite cut it. Or, if you like, whereas in films guys who chop people up arc possessed of immense sexual charm, in real life they're more often up in the loft jacking off.

Hal Hartley's Amateur is another ironic thriller, its commas even more inverted. He's never directed shoot-outs before, and these ones misfire hopelessly — or is that the point? Perhaps because it's got Isabelle Huppert in it, the film dialogue sounds like it's been dubbed into English from a lan- guage with an entirely different rhythm; the actors even smoke as if they're in a French film Killing Zoe is set in Paris, but feels like Detroit. Here, you have to keep reminding yourself this is an American movie set in America.

In other words, we are not solely defined by our actions. Which might come as news to Gregg Araki. In the wake of Go Fish, Araki's Totally F***ed Up is yet another young gay ensemble movie — or, as the film puts it, 'lifestyles of the bored and dis- enfranchised'. Well, yes. By about ten min- utes in, you'll be feeling both.