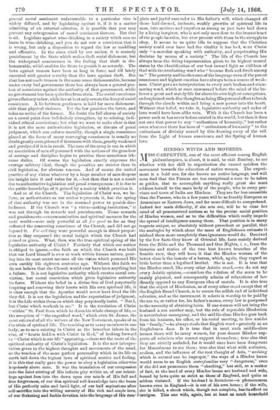 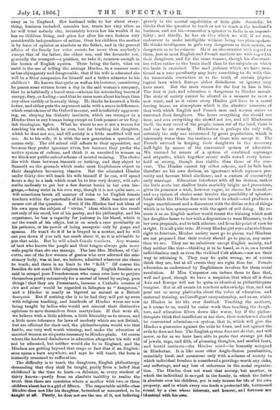 • fiaill to compel poor Frenchwomen who come over here to perjure themselves pretty extensively for a morsel of bread by saying, poor things ! that they are Protestants, because a Catholic version of Ztre and ainzer would be regarded in Islington as "dangerous," and a Hindoo is nearly as bigoted an animal as a British -bourgeois. But if nothing else is to be had they will put up even with religious teaching, and hundreds of Hiudoo wives are now being taught by ladies who would not conceal their distinctive opinions to save themselves from martyrdom. If that were all, we believe with a little address, a little liberality as to means, and a little more tolerance for laws of modesty which are not British, but are efficient for their end, the philanthropists would win that battle, one very well worth winning, and make the education of married women an etiquette necessary to Hindoo grade. Of course where the husband disbelieves in education altogether his wife will tuot be educated, bat neither would she be in England, and the Hindoos are getting beyond that stage so fast that if an English- man opens a barn anywhere, and says he will teach, the barn is instantly crammed to suffocation.

The difficulty is to teach the daughters, English philanthropy -demanding that they shall be taught, partly from a belief that -childhood is the time to learn—a delusion, as every student of thirty knows—partly from an absolute inability to realize the truth that there are countries where a mother with two or three children about her is a girl of fifteen. The respectable middle-class Hindoo does not like his daughter, betrothed or unmarried, to be *aught at all. Firstly, he does not see the use of it, not believing

greatly in the mental capabilities of little girls. Secondly, he thinks that the question to teach or not to teach is the husband's business, and not his—remember a spinster in India is an impossi- bility; and thirdly, he has an idea which we will, if we cane endeavour to make intelligible without being too plain-spoken. He thinks intelligence in girls very dangerous to their morals, so dangerous as to be ruinous. He is an obscurantist with regard to them, just as most English and French mothers are with regard to their daughters, and for the same reasons, though his obscurant- ism refers rather to the brain itself than to the subjects on which the brain is exercised. The mad jealousy which we have men- tioned as a race peculiarity may have something to do with this. An immovable conviction as to the truth of certain physio- logical laws which Europe either disbelieves or ignores may have more. But the main reason for the fear in him is this. The fear is just, and education is dangerous to Hindoo morals. The state of society cannot be altered in a moment to meet a new want, and as it exists every Hindoo girl lives in a moral forcing house, an atmosphere which is the absolute converse of that with which English and French men and women strive to surround their daughters. She hears everything she should not hear, and sees everything she shoald not see, and till Hindooism itself, the very creed of the people, ceases out of the land, there is and can be no remedy. Hindooism is perhaps the only cult, certainly the only one reverenced by great populations, which is inherently worse than the instincts of those who accept it. The French succeed in keeping their daughters in the necessary half-light by means of the conventual system of education. We succeed by means of a system of combined espionage and etiquette, which together create walls round every house- hold as strong, though less visible, than those of the con- vent. The Hindoo cannot try either scheme, and he falls back therefore on his own devices, an ignorance which represses pre- cocity and favours blind obedience, and a custom of excessively early marriage. Education interferes with all his devices, makes the little acute but shallow brain morbidly bright and precocious, gives its possessor a wish, however vague, to choose for herself,— and any system of choice must involve the possibility of spinster- hood which the Hindoo does not intend to admit—and produces a vague unsettlement and a discontent with the divine order of things which is to hitn synonymous with the spirit of evil doing. He re- sents it as an English mother would resent the training which sent her daughter home to her with a disposition to -wear Bloomers, to do her own proposals, and to talk atheism, aad from his point of view he is right. It is all quite true. If every Hindoo girl were educated from eight to fourteen, Libido° society must go to pieces, and Ilindoos are not prepared that their society should go to pieces, any more than we are. They see no substitute except English society, and they neither like that—thinking it to be based, as it is, on a brutal individualism Rich as even the civilized Celt abhors—nor see their way to attaining it. They may be quite wrong, we of course think they are, but at all events they are right thus far. Female education as understood by Englishmen involves for them social revolution. If Miss Carpenter can induce them to face that, well and good, though we have a suspicion that when all is done Asia and Europe will not be quite so identical as philanthropists imagine. But at all events let teachers acknowledge that, and not pour out so many platitudes about the value of education, and maternal training, and intelligent companionship, and so on, which no Hiudoo in his life ever doubted. Teaching the mothers, as it seems to us, would be easier, work than teaching the daugh- ters, and education filters down like water, but if the philan- thropists think that insufficient or too slow, their watchword should be conventual education—a system, that is, which will give the Ilindoo a guarantee against the evils he fears, and not against the evils he does not fear. The English system does not do that, and will never, so far as we have been able to probe that strange pit full of jewels, raga, and filth, of gleaming thoughts, and morbid fears, and horrid instincts—the Hindoo mind—be honestly accepted in liindostan. It is like most other Anglo-Saxoa peculiarities, essentially local, and consistent only with a: scheme of society in which individual freedom is considered a privilege worth any risks, any sufferings, and any loss of coherence in the social organiza- tion. The Hindoo does not want that societes but another, in which the individual is merged in the -family, in which the father is absolute over his childreu, yet is only tenant fer life-of his own property, and in which every one leads a protected life, buttressed round by a clan whose interests, and honour, sill fortunes are identical with hisvwn.